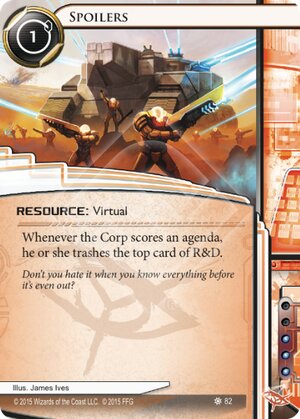 Whenever the Corp scores an agenda, they trash the top card of R&D.

Don't you hate it when you know everything before it's even out?
Illustrated by James Ives
Decklists with this card

Spoiler (har har) This card has done well by me.

First, as any Noise player will tell you, Corps hate things falling out of R&D and into Archives without a run happening. Even when it isn't an agenda it annoys them.

But this card doesn't fire under the runners control. That would be crazy. It only goes off when the corp scores. In most games where the corp wins, they score 4 2 point agendas (or 3 2 pointers and a 1 pointer). Discounting the last score (since, obviously, who cares about milling when the game is over), that leaves the game divided into the first part, where you'd click once, spend a cred and over the course of the game you'd get 3 cards into archives, the second part (after their first score), where you'd 'only' be buying 2 cards into archives, and so on. Presumably, the runner won't install this card if the corp is at 5 points, so the worst state for this card is to give you 1 card into archives for 1 click and 1 cred.

The Corp's tools to mitigate this random milling is pretty much just Jackson. If they have a rezzed Jackson when they score, or a click left to install him, they can fling any agenda that falls back into R&D. Since for most runners Jackson is KOS, this is a surprisingly uncommon condition. He just doesn't usually live on the table, the double draw is too powerful. Obviously, they can stagger their scoring (install advance advance a 4/2, for example, so that they don't end up scoring last click), but Leela players can vouch for how wrong footed a corp gets when they have to play around like this.

Most games, the Spoiled cards end up in the trash without being saved. Pulling numbers out of the air, lets say most corps have 49 cards, of which 11 are agendas. Some decks will have more, others less, but that's a fair baseline. Let's further say that Spoilers fires twice during the game (my experience is that 3 times is more likely, but at least twice covers a supermajority of games). So 11/49 of the time you throw an agenda in the trash. For easy math lets say 1 in 5. The odds of missing 1 in 5 twice are 16 in 25, call it 2/3 against. Every runner knows what a 2/3 feels like, due to the psi game mechanic.

Spoilers impact on score is a lot like "take a psi game that neither side pays for, if the runner wins they get an agenda". For 1 credit and 1 click. Its also important to remember that 'losing' this psi game just means 2 non agendas end up in trash, which obviously isn't bad either.

The influence isn't attractive out of faction, but Anarchs should slap a singleton in their decks. It'll lucksack you wins that you wouldn't get otherwise.

(Data and Destiny era)
Waltzard 388
The 1 click and 1 cred cost for 1-2 mills on average isn't what is keeping Spoilers from being played, it's the deckslots. Even a singleton has a lot of competition. For instance, Scrubber is useful in nearly any stage of the game. A single Imp gives Noise at least one mill and can mill extra cards in multi access runs. Or even a single DLR. If you get tagged running a central with a Data Raven or a Vamp run, you can install DLR and get as much milling value as Spoilers in a single turn AND DLR remains a threat on the board that has to be dealt with. My point is that deck space is super limited and a single card that is situational at best and of which it's effect is completely in the Corps control is not the best use of a deck slot. I can see this being used in a deck that builds around milling or Corp score windows such as Noise or Leela, possibly even Laramy Fisk. But I think there are much better card choices for that 45th slot in most Anarch decks. — WayneMcPain 14 Jan 2016
Those are some really weird comparisons. — Waltzard 14 Jan 2016
If the influence weren't so tight, I'd almost run it out of an Iain connections slow-roll deck since it synergizes with what you're doing anyway. No idea what I'd cut for it. — GrantZilla1979 15 Jan 2016
1

Spoilers, for when you really hate the corp. I can see this being played in Leela Patel: Trained Pragmatist. Have three of these down, Gang Sign with HQ Interface and a Logos console and sit back and wait for the corp to score. Doing so hurts them lots as you trash cards, run into HQ and find that last breaker you need. Not to mention with leela's power you also get to bounce an unrezzed card back to hand to allow even more access after. Makes a nice Troll deck but does eat your influence very quickly.

(Old Hollywood era)
Arameas 30
I think this is great in Noise, as it accents what's his deck is trying to do anyway. Cheap and not unique. Of course this is much less reliable against more glacier decks who will score maybe 3 agendas but still, this 1-2 cards in the Archive extra. — konradh 12 Aug 2015
I had two of these out against as Noise and it was great. That is just extra mills. Makes one think twice about scoring an agenda. I love these cards that punish the other player for doing things they need to do. — Benjen 12 Aug 2015
Does its effect stack? I mean: if you have two on table and corp scores would the corp trash two cards? I'm confused because it sais "top card" so both Spoilers would trash same card? — paxvlae 2 Sep 2016
simultaneous triggers happen one st a time, your choice. so they score, both spoilers trigger and you pick one to fire. top card gets trashed, now you pick the other one, top card gets trashed. — TKO 19 Feb 2017