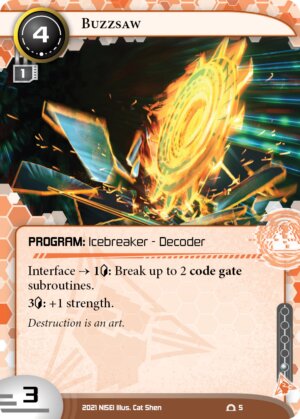 Destruction is an art.
Illustrated by Cat Shen
Decklists with this card

Any player who was around during the heydays of Yog.0, remembers the state of code gates at the time. Quandary was the most popular one, as its low rez cost made it worth playing as a simple gear check. And as soon as Yog came out, you would just install over it, as your code gates were now worthless. Lotus Field was also prevalent, as it was immune to Datasucker shenanigans, even more so after Şifr was printed. But otherwise solid ice like Viktor 1.0, Enigma and Magnet? All unplayable. A breaker that breaks ice for 0 was, to put it mildly, completely busted.

Nisei has clearly learned from this debacle, as Buzzsaw is completely rebalanced while still drawing inspiration from the past. The comparison to Yog is pretty clear. Buzzsaw is quite expensive at 4 credits (down from 5), but breaks ice very efficiently. Only 1 credit for 2 (!) subroutines. That is incredible value. However, I again can't overstate how big of a leap 0 to 1 credit is, no matter the amount of subs. Both breakers start at a very respectable 3 strength, take up 1 MU and are only 1 influence. However, where Yog has no ability to boost its own strength, Buzzsaw does. A whopping 3 credits for 1 strength. This is pretty garbage and not something you wanna do often, as it will sap your credits in no time.

The obvious in faction decoder competitor is Black Orchestra, which has the usual 'bin breaker' advantages right out of the gate, as well as being a credit cheaper. So how does Buzzsaw compare to Black Orchestra on some common code gates?

3 credits vs 5 credits (if breaking the etr)

So unsurprisingly, Buzzsaw is way more efficient when it comes to small code gates, and falls short when it comes to the bigger ones, although the difference isn't as severe as one might think. Engolo shines against these big bois, but is ofcourse both 4 influence and 2 MU.

The biggest consideration when choosing your decoder will be how much support you run. With a Leech to help you, Buzzsaw becomes an absolute beast. Two virus counters is enough to break Fairchild 3.0 for the low cost of just two credits. Just a single counter gets you through Hortum for 1 measly credit. So if your runner makes lots of runs and likes virusses, I think Buzzsaw becomes (even) more attractive. You could even consider Dedicated Processor, which I think is now way more attractive for anarch between this and Cleaver.

Is all this enough to overcome Black Orchestra's established popularity and synergies? Possibly. I think this card will see play going forward. If nothing else, I think it is always a good thing to give more viable options to runners to assemble their breaker suite. Also, what a cool name and card art. Props!

I was on the fence about whether or not Buzzsaw was any good, but after seeing your numbers comparing it to Black Orchestra, I think I'm convinced.

Buzzsaw is one of the very best breakers in System Gateway. Sure, it's boost strength is terrible, but specifically in SG, the only code gate that needs boosting is Funhouse, and that can be "bypassed" with 4 credits.

It break the other two SG code gates for a single credit. Of the 13 code gates in Startup (at the time of this writing, eg SG launch) it breaks the 7 for one (except card effects on Afshar). Tollbooth being its nemisis at 10 credits including encounter "fee".

Compared to other "stable" breakers like Gordian Blade and Abagnale it compares pretty OK too, coming in at higher strength, and better breaking ratio. It comes nowhere near the best decoder in the game Amina in ratios, but 4 influence and a 7 credit cost makes it hard to splash outside of faction. Compared to the staple Anarch decoder, Black Orchestra, it does quite well too. BO has terrible numbers against Tollbooth too at 9 credits, but breaks most code gates for 3 credits, but Buzzsaw have similar or better numbers than BO for code gates with more than 2 subs.

All in all, this is definitely a breaker that will see play outside of System Gateway and Startup. It will need help with boost, either with Ice Carver, Leech, Takobi or even Devil Charm. With a little assistance, you will see Buzzsaw cut through code gates like butter :)