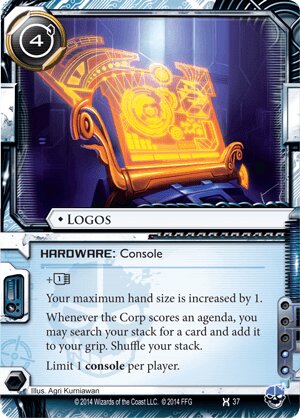 Your maximum hand size is increased by 1.

Whenever the Corp scores an agenda, you may search your stack for a card and add it to your grip. Shuffle your stack.

Illustrated by Agri Karuniawan
Decklists with this card

For all these reasons Logos is the Console that fits a versatile toolbox deck the best.

(Up and Over era)
Him 278
Also goes great with Leela Patel and Gang Sign, stacking up these "When the corporation scores.." effects from Blue could really force a nasty bottleneck in HQ, right where the Criminals like it. — umbralAeronaut 18 Oct 2016
5

I just want to throw it out there that this can be used as a consistency pick if you don't want the ability from another console more.

It sucks to let them score agendas, for sure. That's never the goal. Even if you have this out you still want to score stuff, obviously. Realistically, they are probably getting one or two through anyway with whatever tricks they are using.

I don't think this consistency is something that should just be pushed aside either. Whatever your game plan is, there is probably some card or series of cards that you want to see every game. Sometimes, that doesn't happen even if you burn through 20 cards. This console helps ensure that your 3x Account Siphons or whatever aren't the last 3x cards in your deck. If that's the card you want this matchup, it's pretty likely you won't have to play the whole match without it.

That's really not bad as a console ability.

Would anybody use an ID that said "After drawing the normal 5 cards at the beginning of the game, look through your stack and take one and put it in your grip"? You don't even have to show it to the opponent That ID would at the very least be "good". Maybe not the best ID, but a solid choice. This console isn't that, but it's somewhere in the same ballpark.