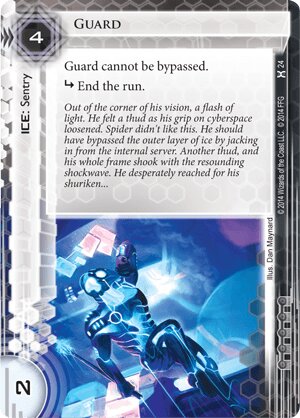 Out of the corner of his vision, a flash of light. He felt a thud as his grip on cyberspace loosened. Spider didn't like this. He should have bypassed the outer layer of ice by jacking in from the internal server. Another thud, and his whole frame shook with the resounding shockwave. He desperately reached for his shuriken…
Illustrated by Dan Maynard
Decklists with this card

A piece of ice that can't be bypassed? Looks great on paper right? The problem with Guard is that the most common source of bypassing ice (Femme Fatale) can just break this anyway. If it had been strength 4 or a barrier, for example, then I think it would justify it's 4c rez cost. As it is, there are too many other good options to justify a card whose only purpose is to block an Inside Job.

(I will make one final remark in this cards favour however - Inazuma Guard I have found to quite an effective early game scoring server.)

Guard basically has all the problems of Rototurret being a low strength sentry without the very useful Trash 1 Program subroutine.

Although Guard will stop Inside Job you still can't reliably rush an early Agenda behind it because Self-modifying Code, any Killer or an AI breaker will eat it for breakfast.

The worst part about Guard's 'anti-bypass' ability (which also 'stops' Femme Fatale, Feint or Security Nexus) is that it doesn't stop the most common type of runner bypass! I'm talking about Blackmail, DDoS and Leela Patel: Trained Pragmatist bounce.

Guard is over-priced and under powered. Every faction except have better Sentry Ice that can End the run. and Jinteki would rather use their sentry ice to end the runner.

(Democracy and Dogma era)
Zakalwe 479
I think it is fair to say that if the card didn't exist, printing bypass cards would be trouble. While Security Nexus was only popular for a small time, cards like this allowed them to make that card and not worry that it would dominate and unbalance the game. — Goldstep 1 Apr 2016