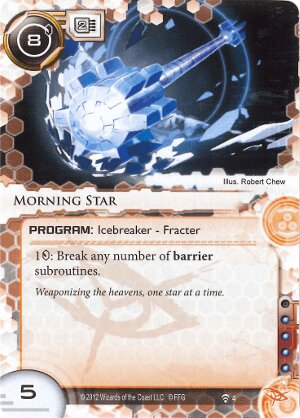 Weaponizing the heavens, one star at a time.
Illustrated by Robert Chew
Decklists with this card

This card is one of Anarch's trio of static-strengh cost efficient breaker from the core set. Morning star is the most expensive of the trio with 8 and . It's also hardly unsplashable with 4 influence.

There is currently 19 ICEs that can be broken with this card:

and 7 barrier ICE which it could not break without help from other cards:

Considering most barrier are ETR, Morning Star helps a lot in gaining access to any server. The downsides other than its install and splash cost is the low number of barrier with more than one subroutines. Barriers with more than 1 subroutines that can be broken with it are: Ashigaru, Eli 1.0, Hive, Markus 1.0, Wall of Thorns, advanced Tyrant and Galahad.

Other than Eli 1.0 and Galahad, these ICEs are rarely used which is why the cheap and splashable Corroder is still the most popular breaker around.

Another soon-to-rotate out fracter that's made obsolete by Paperclip.

Where Morning Star can break it's at least as efficient as Paperclip but it's rarely more than 2 more efficient. Meanwhile Paperclip costs 1 less , 4 less to install and installs from heap.

In the general case the flexibility and lower install cost makes Paperclip the far better option.

(Free Mars era)
Silv 347
I remember ages ago when I tried to make a deck with Femme Fatale + Torch + Morning Star as my breaker suite. Scavenged of course, not hard installed, mind you. The main problem was, surprisingly, the MU cost. Cards like Morning Star, Garrote and Battering Ram aren't bad because they're bad. They're bad, because they cost 2 MU, which you really don't want for a 'standard' breaker. If you go for it anyway, well... I guess, packing Morning Star in a NEXT hevy meta would make for a nasty surprise. Too bad that Parasite is preventing the meta from ever shifting to mass sub ICE like Hive, Ashigaru, Tyrant (kidding :D), Spider Web, NEXT Bronze, Galahad. In such a meta, Morning Star could shine. And I guess that was always it's purpose... Keeping those cards from getting out of hand. Well, they were never even close to, so ''Good job, Morning Star!'' ;) — Krams 3 Aug 2017
1

I know I'm million years late, but: why this is so expensive (in credits, memory and influence) vs his static brothers Mimic and Yog? What's so special about barriers? Love the jank in the trio supported by Dedicated Processor, but the (triple) cost hurts.