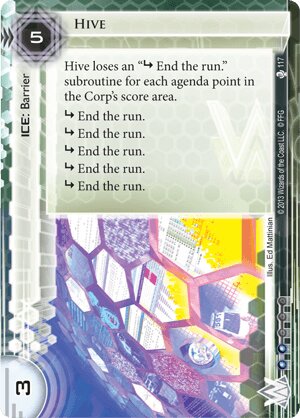 Hive loses an "subroutine End the run." subroutine for each agenda point in the Corp's score area.

Hive is arguably the second best Weyland ice in the game, and is a strong include in nearly every Weyland deck.

Hive is the best rush ice in the game.

Little Engine can give it a run for its money (heh), but it's in the wr... (I'm sorry, can we just take a second to appreciate that double pun?) ...rong faction. Chimera is a neat little trick, but there's actually a lot of opening hands that can slap her down. ...Phrasing.

Both of those plays are either incredibly stupid, incredibly lucky, or both. Inside Job is a "welp", but don't do this against criminals you idiot.

More often than not, Green is the "rush" ID, and even if you aren't rushing, you're still probably relying heavily on powerful cards like Archer (she's clearly Hive's better half) and Corporate Town, both cards that require you to at least score one agenda before they can take hold. Scoring early in Weyland is a bit like scoring an early Astro in NBN - it truly sets the pace for the rest of the game. Nothing (besides fast-advance) lets you secure that first agenda quite like Hive does.

Let's address the elephant in the room, though. Hive is clearly designed to be overpowered in the early game, and then become crappy as the game goes on (it's kind of like the "bad pub" of ice). Luckily, Weyland is the faction best able to shovel that crap into the neighbor's yard. Finally, I'd just like to point out that even after scoring a 2-pointer, Hive is still as cost-efficient as a Spiderweb. If you score to 4 and then close out the game with a 3 pointer, Hive is doing work for you all game.

(Data and Destiny era)
Bigguyforyou518 1705
So, Hive is apparently good. What ICE do you remove for it? Is this a straight up swap for Spiderweb? Because the problem I've always had with Hive is I think "Man, this card could be really good. But 5 credits." and then put it away. I realize that Spiderweb is just barely cheaper, but a credit is a credit. Hedge Fund nets you 4, which is enough to get from 0 to rezzing most Weyland barriers you'd want to include. Except Hive. Hive costs more than your average econ card to rez is what I'm trying to say. A lot of times that one credit differential leads me to pick Spiderweb every time. — WayneMcPain 25 Jan 2016
I was originally typing about BABW and Beanstalk, so that's why the Hedge Fund part makes no sense lol. — WayneMcPain 25 Jan 2016
I don't consider it a straight up swap for Spiderweb at all. Spiderweb can sort of do Hive's work, but it's also much better than Hive on centrals that are getting hit all game long. Hive does its heavy lifting on remotes to babysit your first agenda into your score area - it assumes you'll be able to take it from there (with an Archer or a fatal Atlas token). A credit IS a credit though, you're right, and in most of the turn-1 examples I outlined above, you won't have enough money to score immediately afterwards (unless it's an Oaktown, or you had a Hedge Fund in your opening hand). There are always going to be situations where you'd rather have a cheaper gear-checker than a hefty taxer, but I very rarely regret that credit investment. It's effectively an early game Tollbooth in front of your scoring remote. — Bigguyforyou518 26 Jan 2016
Thanks for the insight. I've been running Spiderweb in most of my Weyland decks, and I've always wanted to give Hive a try but for example in my Argus deck, which tends to be poorer than usual Weyland, it always seemed to expensive to run more than one and seemed redundant to run both Hive and Spiderweb. I guess it doesn't have to be either/or. they are just so close in function that it seems like you should only play one or the other. maybe I will try it as a one of and see how it works out. — WayneMcPain 26 Jan 2016
"This Ridiculous Card" not linked to Government Takeover. =( — LordRandomness 26 Jan 2016
5

This is a very straightforward piece of ice, which I suppose is why there haven't been any reviews on it yet. I've recently started adding it to more of my Weyland decks for the following reasons:

• Faust is everywhere, and Faust HATES this card. It cannot get through this thing by itself without burning through 6 cards. If they're using e3 Feedback Implants to save cards, it'll still cost them 2 cards and $4 to get in. Even Atman has to pay $5 to punch through this thing when it's at full strength -- not too shabby!

• Parasite is rarer in the post-MWL world, which helps mitigate the low strength.

• If you're Blue Sun: Powering the Future, it can be easily recalled after it falls off late-game -- or just moved to another server to continue to stymie the efforts of a Faust-reliant runner.

It's not the right call for every deck, but for decks that can't score quickly and/or would prefer to flatline the runner, it has become a lot more valuable lately. Give it a try!