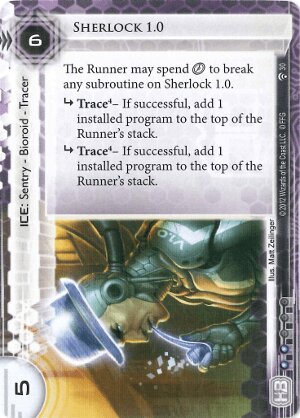 subroutine Trace[4]. If successful, add 1 installed program to the top of the Runner's stack.

subroutine Trace[4]. If successful, add 1 installed program to the top of the Runner's stack.

Sherlock is ready for a second go. As a five strength sentry that makes him rather hard to break - Killers are the least efficient of all the breakers by straight up use, and at five he is solidly outside of Mimic range (even with Net-Ready Eyes). The fact that his subroutine can set back the tempo of a runner is often overlooked. Sure it doesn’t actually stop the program from staying in play, but consider this: One click to draw, one click to play again means that if either one of his subroutines successfully hits, its half a turn lost for the runner.

Combine him with Targeted Marketing calling out the program they had to put on top of their deck, or even with just NBN: Making News for a bigger better trace, he can be a bit scary. He is also a bioroid that has to be broken in one way or another if he is toward the outer bit of the server. A lot of Shaper tricks could be stopped by putting the wrong program back on top of the stack.

Aggressively costed and an ability that really can’t just be ignored, it has to be dealt with in some way, Sherlock could very well make an appearance in the future, with the right deck.

(Chrome City era)
lynkfox 381
Sherlock is bad not because every option to break it is bad, as in fact they're all quite taxing (which include spending 2 clicks, breaking it with a breaker or beating the trace). It's bad because it gives the runner a lot of choice as to how to deal with it. — Kroen 18 Jun 2015
5 cost Sentries: Taurus, Saggitarius, Ichi 1.0m Grim. 6 cost Sentries: Snoop, Uroboros, Tsurugi. At 7 there is Shinobi... In terms of taxation Sherlock is nowhere near even Eli, not to mention Grim, both Ichis or even younger Viktor. Srlsy, the list is long and Sherlock is too busy solving the mystery of his own existence to even queue up... — quiciuq 18 Jun 2015
I want so badly to play Sherlock, but he's just too expensive in my eyes. Which is strange since most of the Bioroids use the "click to bypass" limitation as an excuse to lower their cost. I shudder to think what his cost was valued at beforehand! — KitsuAeryn 18 Jun 2015
3

For quite some time I tried to make Sherlock work, but he simply cannot compete with the other bioroid ice. His subroutines are a 'kind of' trash program subroutine, just a little bit weaker. It is better in cases of Clot or Parasite because they can't be tutored back immediately by Clone Chip. That said for nearly any other program this subroutine is worse than trashing. Instead of having to spend a means of recursion the runner can simply draw the program. Also depleting programs like the dog breakers or Cache would love to have the subroutines of Sherlock fire. Noise would gladly run headlong into him to recur two viruses at no cost.

To compare its strength you can look at Ichi 1.0 and Viktor 2.0. When you compare him to Ichi you gain 1 strength at cost of an additional and one subroutine. That is a not so nice trade off, especially since you only have a 'kind of' trash. The big downside is that Sherlock is blank in absence of programs. In that case you don't want to rez him at all. Where Ichi can still fire a trace Sherlock does nothing. Compared to Viktor you also have a two subroutine ice for an additional for the subtype of sentry instead of code gate. That is okay per se, however the subroutines of Viktor are more meaningful and universally useful. They do have the same click tax though so that's something.

I think Sherlock is correctly priced between Ichi 1.0 and Ichi 2.0. When you only need the trash subroutines and the additional strength to escape Net-Ready Mimic you have that ice right here. However I think a third subroutine like " End the run if the runner has no programs installed" would have made this ice a lot more viable even at an increased rez cost of 7.

As it is Sherlock usually does nothing. For him to matter you have to stack bioroid ice deep or have an Heinlein Grid or Zed 1.0 installed. Both of those are only useful in specific decks and usually can also support stronger bioroids. Maybe the 2.0 version will redeem Sherlock or a lot more programs hit the table that would be worse of in the stack than in the heap. Then Sherlock might be alright, but for now it is one of the weakest bioroid ice.

(Old Hollywood era)
Capstone 42
I think Sherlock's biggest weakness is that there's SO many ways to break him. You can have a killer/AI out. You can click through him. You can pay the traces. For as "meh" as his subroutines are, they should be absolutely unbreakable. Instead, he's one of the most porous ICE in the entire game. — Bigguyforyou518 29 Aug 2015
If your deck would normally run 3x Ichi 1.0, you can replace one with a Sherlock to fight against PPVP Kate, as it is not a Destroyer and hence cannot be broken by Sharpshooter — RJayz 29 Aug 2015