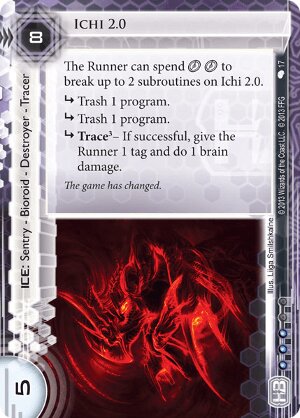 The Runner can spend clickclick to break up to 2 subroutines on Ichi 2.0.

subroutine Trace [3]– If successful, give the Runner 1 tag and do 1 brain damage.

The game has changed.
Illustrated by Liiga Smilshkalne
Decklists with this card

Compared to Ichi 1.0, the extra 3 to rez Ichi 2.0 gets you one extra strength, increased trace amount on the final by 2 for a total of trace 3, additionally the runner has less options for breaking since it must always use to break two 's instead of a single for each unlike most Bioroid ice including Ichi 1.0, so yeah you get what you pay for.

Glacial decks should give Ichi 2.0 a look because of it's high-tax value to the runner

Install for free: Because of the high cost of Heimdall 2.0, other supporting cards that allow it to be installed for free (albiet often with conditions) make it much more attainable (in order of least to most difficult strings attached): Priority Requisition, Shoot the Moon, Mutate, Bioroid Efficiency Research, Oversight AI, Howler, & finally Awakening Center.

Ichi 2.0 is often included in decks with Ichi 1.0 to maximize taxing the runner

Since Ichi 2.0 has no end the run Caprice Nisei could potentially be a good pairing with generally a 66% chance of shutting the runner down if corp has at least 2s

Tyr's Hand: Sticking a surprised runner with any one of the s on Ichi 2.0 could potentially be a game ending event, or at very least put some momentum into the corps favor.

Improved Tracers, again that extra 1 even on traces is not insignificant.

Combined with Haas-Bioroid: Stronger Together puts Ichi 2.0 out of Ninja's 3: +5 strength range forcing the runner spend yet another 3

More taxing for the runner to break all three s

Strength of 5 makes it very expensive to use many icebreakers to break any of it's . Got a Parasite? Probably have a bit of time

Surprising the runner with insufficient s may result the runner's rig getting trashed in a devastating way, possibly swinging momentum into the corps favor.

Like other 2.0 Bioroid ice, cost makes using this card riskier.

With it's higher cost, such cards become juicy targets for operations such as: Emergency Shutdown or Forged Activation Orders etc.

Even though it is taxing, runner has lots of options to navigate through this card.

As a Destroyer sub-type Ichi 2.0 is potential target of Sharpshooter

Unless this card is getting installed with a combo or the deck has some stellar economy, this card will probably be looked over. At three influence cost it's also much less likely to show up in other corp decks. Often decks which feature Ichi 2.0 will only have 1 copy and perhaps 1-2 other heavy hitter ice which cost > than 6 and then feature a suite of cheaper ice for the vast majority of server protection.

(Data and Destiny era)
chris_walker 644
That's what I'm talking about. Great review. I guess its worth noting that Stronger Together puts this above Ninja range, but I'm not a professional standup, so. — LynxMegaCorp 27 Nov 2015
Thanks, Lynx Kuroneko, I just added it. — chris_walker 27 Nov 2015
So does Improved Tracers. Sounds weird, but I actually had success with Viktor 2.0, Ichi 1.0 and Ichi 2.0 in an NBN: Making News Improved Tracers glacier. — Krams 27 Nov 2015
Actually, Improved Tracers is sonething that I want to make work. The tracer bioroids seem like a good fit, especially the upcoming trace for brain damage bioroid. — LynxMegaCorp 27 Nov 2015
Thanks again Krams, I have added your Improved Tracers combo to the review. — chris_walker 29 Nov 2015
In the current meta, where a lot of D4v1d's are played, you can use (and empty) a D4vid on Ichi 2.0 unlike Ichi 1.0. Using Faust however, takes 6 cards instead of 5. — sepruda 24 Feb 2016
Also in the Install for free, you forgot to change the name from Heimdall 2.0 to Ichi 2.0 :-) — sepruda 24 Feb 2016