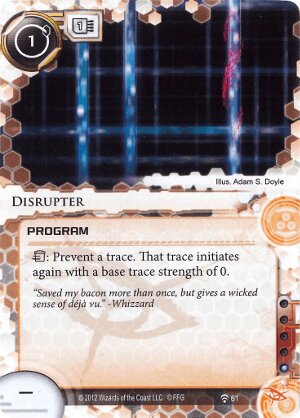 interrupt → trash: Reduce the base trace strength of a trace to 0.

"Saved my bacon more than once, but gives a wicked sense of déjà vu." -Whizzard
Illustrated by Adam S. Doyle
Decklists with this card

Sadly this card is a counter for nothing other than good times and game enjoyment, as the official ruling is that you have to use Fun Disrupter before the Corp declares his or her trace strength. This means if your opponent is Blue Sun, and they have more than god (and of course they will), this janky little piece of cardboard will spare you from exactly six of the 49 tags you were about to get from Midseason Replacements.

Hello, Security Nexus, how do you do? Do you want to resurrect cards from the oblivion? Do you mean apart from Power Tap, which was almost forgotten? Fine! All for you! Take it and make it shine! Make profit from that forced trace!

(Old Hollywood era)
valerian32 139
Even with Sunny and Security Nexus, this card feels like a 1%'er. Because you are preventing the trace, you can't double dip on Power Tap. Because you are constantly getting access and controlling the corp's credits, you aren't worried about money, and in my experience, corps who are behind on the trace by 1 or 2 might spend to mitigate your ingress, but when you are down 6 or 7, they don't try. Additionally it gets in the way of your overmind tokens just in case you need to fight off a Lab Dog or an Excalibur. She may have 25 influence, but save some for the other goodies she really needs. — Goldstep 23 Aug 2015
Nah Lukas ruled that it does trigger Power Tap again (trace intitiates, is prevented, initiates again.) Still in my experience the card is marginal, it can be useful if it comes out before your link or to swing the math in your favor during a Midseasons but the cardslots, memory, and influence probably aren't worth it. — StashAugustine 23 Aug 2015
Well, hmmm. I may rethink my testing... But I think the solution is still "the cardslots, memory, and influence probably aren't worth it." just as you suggested. Maybe it's a 5% instead... which is still not worth including. — Goldstep 23 Aug 2015
Maybe has a place in Geist? — CapAp 14 Sep 2015
It's potentially useful in the anti-flatline Geist deck. He has natural flatline resilience since his ability draws cards and there's a whole slew of cards that trash for anti-tagging or anti-damage effects (anti-trace on this one is novel, though). Plus if he's running the Cloud breaker deck he has a lot of spare MU and a decent chunk of Link to help beat weak traces with. — LordRandomness 20 Jan 2016
Not to mention we have some silly-high trace subs now, Gutenberg and Turnpike coming to mind. — PureFlight 14 Mar 2016
2

I'm assuming this was a hard counter to SEA and (mainly) Midseasons. Cheap to splash too, so I guess it might make a decent 1-of in SMC-reliant decks not wanting to use Plascrete. For 1 credit (instead of 3), you can avoid those two threats (and for 1 MU, unfortunately). Unlike Plascrete, its viable against any large trace.

(All That Remains era)
LynxMegaCorp 1339