Eliza's Toybox is the preeminent purveyor of high-class debauchery on the moon, courtesy of its bioroid pleasure models and other exotica. Every fantasy has its price.
Haas-Bioroid • Henning Ludvigsen • First Contact 42
All sets:
Links: Decklists | ANCUR 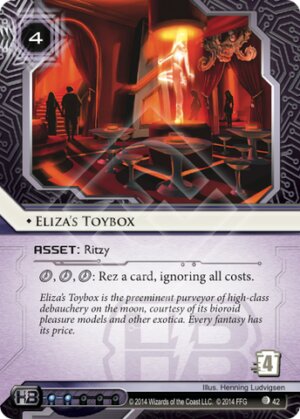 An interesting card with a payoff limited by what ice and upgrades you use.

Eliza is situational due to competition from Melange Mining Corp. .But what about high cost cards like Hadrian's Wall, Wotan , SanSan City Grid (if an opportunity to use the interaction to score an agenda presents itself) or Wall of Thorns? Being able to deploy Janus 1.0 in spite of economy lag can be a daunting call.

Eliza costs 4 to rez and rezzes something else for 3 clicks. She takes a fair lump of credits to trash to compensate.

Melange only costs 1 to rez and gives 7 credits for those same 3 clicks, giving an effective net yield of 6 credits the turn it's rezzed and fired. But can be trashed on a whim and the turns spent melanging can be mitigated if you try to rez all your big ice too quickly.

Neither of them are cards the runner wants to particularly see for more than one turn.

Like Melange, Eliza's gravitas becomes stronger as the game goes on. But her effect is sorely wasted on anything that costs 7 or less credits to rez, as Melange is easier to get out and fulfils the requirements more easily, all the while maintaining influence neutrality, unlike Eliza.

Not for all decks but an interesting way of getting a powerful glacier out on the cheap.

Due to the high rez and cost, this is a card that needs a significant amount of support to work properly. However, if you can build a deck that allows it to fire at least once, you can make some massive plays. Here's some of the magic that comes out of Eliza's Toybox:

The standard way to play this card is to install it and leave it unrezzed for a turn (preferably behind a piece of ICE or two) and then flip and use it at the beginning of your next turn (much like a Melange Mining Corp). There are some possible shortcuts, though. Here's a few:

A major facet of this card that I think some have overlooked is the information cost of showing the runner what they need to break into your servers. For central servers, where pressure is applied for much of the game and a number of access are expected over the course of the game, this focus is typically more on taxing than ending the run. On a scoring remote, where it is important to keep the runner out, the uncertainty typically favors the corp.

That said, when your ICE is backed up by some strong upgrades (e.g. Caprice Nisei, Ash 2X3ZB9CY) then the role of the ICE shifts more towards a tax as on a central server; forcing the runner to break it multiple times before an agenda is scored.

Some other advantages to rezzing ICE in advance of a run:

The final downside I'd mention for this card is deckbuilding. To use this card effectively, the corp will need to include a certain density of high-cost ICE that they can't/don't want to rez with credits. This card is a combo card, that may have a lot of targets, but if this asset is kept off the board then some of those ICE become more of an albatross around the corp's neck. If the corp can rez enough of their ICE on econ even when Eliza's Toybox is trashed, then there are probably better uses of the card slots anyways.
(The Universe of Tomorrow era)
bubbathegoat 588
It's worth noting that this card doesn't just rez ICE, but any card, such as Corporate Town, which can really ruin a runner's day. — slobad31 21 Oct 2015