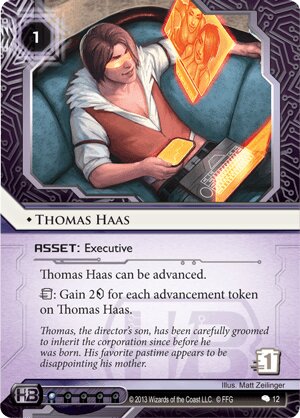 Thomas Haas can be advanced.

trash: Gain 2credit for each advancement token on Thomas Haas.

Thomas, the director's son, has been carefully groomed to inherit the corporation since before he was born. His favorite pastime appears to be disappointing his mother.
Illustrated by Matt Zeilinger
Decklists with this card

The corp installs Thomas Haas in a server. Advances him twice. Optimistically, the runner takes the bait and runs the server, paying their way through multiple ice. At the end of the line, the corp rezzes Thomas Haas, uses his Trash ability, and gets back the money back that they paid for him. Is the runner worse off? Maybe, but mostly Thomas Haas was a waste of their time.

What a perfect card for Thomas Haas, whose biggest character trait is that he is a waste of time loser.

I'm going to try to send him to Space Camp.

Thomas Haas is an unusual card. He appears to be an econ card, but in actual fact is a 'trick' / utility card.

He is not a normal econ gain card because each advancement on him costs a and 1, and eventually gives back 2, which is a net gain of 1 per - the same as simply clicking for credits. (Less the overhead cost of to install and 1 to rez).

So what is he actually for then?

In a glacier deck he can be installed and advanced in scoring remote to bait the runner into spending a lot of credits running him, thus opening a scoring window the next turn. Compared to using an actual ambush (like Aggressive Secretary), he is a low-risk bait, but with less payoff if successful. Low risk because regardless of whether he is run or not, he can be rezzed and then trashed to reclaim most of the cost invested in him.

However, this same role - of spending runner credits to open a scoring window - can now be better filled by Reversed Accounts in an expensive remote. Either the runner spends a lot of credits to access and trash this, or next turn the Corp can use it to make the runner lose a lot of credits. (GRNDL Refinery can also work if the Corp has a way to turn a credit lead into a scoring window, eg with Ash 2X3ZB9CY, or some big unrezzed ice installed).

Thomas can also be used as a secret credit cache to feign being poor. Once the runner approaches a piece of ice (and passes their last chance to jack out) he can be rezzed and trashed to gain credits then use them to rez that ice.

It is also possible to use a card that provides for advancing on Thomas Haas to turn those into real credits (eg The Root, Simone Diego). However, this is a convoluted setup for little payoff.

Overall, Thomas Haas is an interesting card, but it is only a very rare deck that he is the best choice for whatever effect you want him for.

(Order and Chaos era)
Ber 2601
Made a deck just for you to try :) I can have fun all day! http://netrunnerdb.com/en/decklist/18476/because-we-can-v1-0 — Jay-TS 3 Apr 2015
He can also be used with any card that places advancement tokens, such as Tennin Institute, Space Camp, or Mushin-No-Shin. — Bigguyforyou518 3 Apr 2015
An addendum to your "Secret Credit Cache" idea - you can also use him quite well to recover from a Vamp or Account Siphon, similar to how you could use a Sealed Vault. — Bigguyforyou518 3 Apr 2015
One possible reason to use him as a bait over and above Reversed Accounts is that to activate Reversed Accounts costs a click; this means you cannot install advance advance to look like a 5:3 - Reversed Accounts is probably better in a lot of 4:2s I suppose. — Cliquil 3 Apr 2015
Another possibility is to combine him with NeoTokyo Grid and advancing him once per turn. This results in 2 credits for every click - 1. — Capstone 4 Apr 2015
Jay-TS thanks for the deck, that does look fun! — Ber 11 Apr 2015
Bigguy: true they are some more utility uses for him. I feel that using Mushin on him is an incredible waste, but Tennin would be OK, and Space Camp in Archives could be hilarious. — Ber 11 Apr 2015
2

Similar in ability to a GRNDL Refinery, this is a solid way to get a few credits when you have a defended remote server. One key difference makes this far more flexible, however. This card does not require any clicks to cash in, so if your server is compromised you can dump him for your money! However, the sheer amount of credits to advancement makes GRNDL Refinery much more cost effective if defended.

It's not worth it if you install-advance-advance, netting you a cool 1 with rez and advancement token costs, so plan to load it up. If you have any free advancement tokens to toss onto him, such as Mushin No Shin, Shipment from Kaguya or Tennin Institute: The Secrets Within, his returns will be much more agreeable. Overall, he is a safer and less lucrative choice for advance economy than GRNDL Refinery.

(Order and Chaos era)
Steamwood 299
Your math is wrong. Thomas Haas does not yield you any money. You spend a click (woth 1 credit) and a credit (worth 1 credit) to gain 2 credits. That makes it zero. — marsellus 6 Mar 2015
Loading Thomas Haas does yield you money, it's just not any more efficient than the basic action. The real value come from the fact that you get to click for cred while representing a 5/3. Most other traps were wasted time and money if they don't get run. With Thomas Haas, you end up ahead on cash either way. There's also value in the fact that he hides the credits, messing up the runner's math. It can close the vulnerability window from Siphon, or let you rez things it looked like you couldn't afford. — Delha 6 Mar 2015
Mushin No Shin is probably not the best choice with Tommy boy: the main advantage he has over GRNDL is that you can cash him in during a run. However, this requires that you rez him, and Mushin won't let you do that until the start of your next turn. — tiedyedvortex 7 Mar 2015
Thomas Haas' other comparable card is Sealed Vault. Both effectively cost 1 to activate, and can provide a sink for money, or an emergency recovery option. Sealed Vault is far safer, with an 8 trash cost. Thomas nets you money when you use him. As much as I want to use Haas, he's less effective at hiding money, since he requires clicks to build up, but he's better at recovering from a Siphon, as he gives back more than you put in. Haas with an upgrade can potentially make a safe trap, because you can just take the creds before he's trashed. But overall, there always seems to be something more useful you could have done with the clicks and the server. — Wookiee 20 Mar 2015