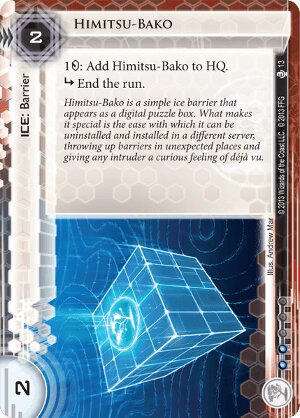 Himitsu-Bako is a simple ice barrier that appears as a digital puzzle box. What makes it special is the ease with which it can be uninstalled and installed in a different server, throwing up barriers in unexpected places and giving any intruder a curious feeling of déjà vu.
Illustrated by Andrew Mar
Decklists with this card

Means: "puzzle box". Himitsu-Bako is missing the text that says "save Jinteki faction three influence by removing Ice Wall from your deck list".

• the ability is superb when faced with Runner decks that like to host Caïssa on your ice; wait for them to break it with Knight (2 ) and bounce it to trash the hosted Program.

• hard ETR, something Jinteki lacks a lot of.

• gives back 3 influence to Jinteki from not needing to include Ice Wall (because Wall of Static / Bastion cost too much).

• you're never going to catch Parasite with the anti-hosted Program ability.

• every other faction has better options in-faction for a cheap, early game stopper, so the light splash cost is irrelevant.

• Midori could be used to switch out other ice that has been hosted for this, then you can bounce this to make space for the reinstall of the original ice. This may preserve the viability of some of the more positional Jinteki ice.

• Combined with Jackson Howard (or Thomas Haas), Himitsu-bako is able to cause an entire server to disappear, negating any effects that require a successful (or unsuccessful) run.

(Up and Over era)
ODie 719
you didnt mention 1 pro. bouncing himitsu is a clickless ability that you can do anytime. meaning that if the runner is about to access your HQ and you have agendas there you can bounce some puzzle boxes to buff up your hand to waste the runners time and creds. — tsuruki23 1 May 2015
Minor combo wih Ashigaru too. Pay 2 creds to get this back in your hand and add one more ETR routine — wozzit 17 Jan 2016
5

Himitsu-Bako has always been a useful ice for decks, an influence-free 2 End the Run. Parasite resistant (although not Parasite proof) barrier that can be redeployed (combos with Akitaro Watanabe, Tenma Line and Amazon Industrial Zone).

Bako now has a new utility with the release of Democracy and Dogma - it combos very nicely with Bio-Ethics Association, Clone Suffrage Movement, Commercial Bankers Group and Sensie Actors Union.

This is especially efficient if you've got an empty remote with a rezzed Bako already, just install your Political Asset in the server and if the runner doesn't trash it you can pull Bako back at the start of your next turn to trigger the ability. Now this seems like a nice one-off combo, since you will have an unrezzed Bako next turn that cannot be returned to hand, but this is where Surat City Grid comes in to rez your Bako for free. It's also possible to use the Amazon-Tenma jank combo as well but this seems highly inefficient ( and need to protect both Amazon and Tenma Line). Keep in mind that without some kind of rez discount the net cost of installing and rezzing Bako is 3.

(Democracy and Dogma era)
Zakalwe 479
I thought about this as well, but this also means you are operating on two click turns. Not sure the payoff makes it worth it. — WayneMcPain 10 Apr 2016
I thought about this with Political assets too. But I think it'll only work once, and only if it is already rezzed. Surat City Grid won't work unless you have another upgrade to rez along with Himitsu. — quailman2101 10 Apr 2016
I guess if you have Surat in another server and are rezzing another card in that server anyway, you could then rez Hitmitsu for free. (I forgot that the card doesn't have to be in the same server) But the thing is, Himitsu is broken for 1 credit by the most common fractor in the game. — quailman2101 11 Apr 2016
2

Himitsu-Bako is a simple ice barrier that appears as a digital puzzle box. What makes it special is the ease with which it can be uninstalled and installed in a different server, throwing up barriers in unexpected places and giving any intruder a curious feeling of déjà vu.

Himitsu Bako was relevant for Jinteki for quite a while, since it was the cheapest influence free gearcheck barrier for them for a long time; and though it's ability and stats beyond being 1 to break with corroder were rarely relevant, it was the simplest way to force the runner to get their fracter.

However, this is no-longer relevant, besides some kind of jank use, as Vanilla is an impressive 0 to rez, which is basically impossible to beat. And sure, Vanilla dies immediately to Parasite, but if they are spending a parasite on a Vanilla, you are the one who is coming out ahead.

Himitsu Bako; I miss when we had reason to run cards like you beyond in draft; maybe one day another interesting Jinteki barrier that can be repositioned with ease will come along; and maybe they will be given their chance in the lime-light too.

(Free Mars era)
Quarg 256
Himitsu-Bako is the perfect barrier for Jinteki rigshooter decks; them killing your Vanilla with Parasite is less appealing when you've removed every possible way for them to break barriers. Bako is also immune to Knifed, and Femme Fatale can only get past it for one turn before it's recalled and reinstalled. On top of that, you can use it for protection before they find their Paperclip, then (if it's your only barrier) add it to HQ to prevent them from reinstalling the Paperclip for the heap. It's a perfect fit for rigshooter; its main downside is that Skorpios has taken up the mantle as the best rigshooter identity and it doesn't need the ability (Weyland has plenty of barriers, and Skorpios stops Paperclip recursion). But Bako is much more than just a cheap gearcheck; I will genuinely miss its ability. — Netrunnerunner 4 Aug 2017