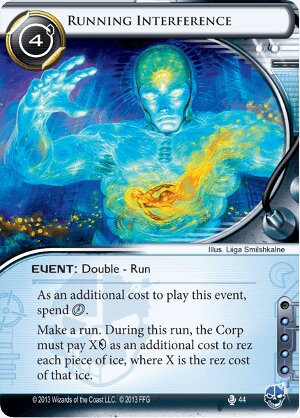 Make a run. During this run, the Corp must pay Xcredit as an additional cost to rez each piece of ice, where X is the rez cost of that ice.

Running Interference is possibly the most Criminal double event printed. Like Inside Job, it allows you to threaten a server you cannot break into. Like Account Siphon, it drains the corporation of credits. However, this is where the similarities end.

Unlike either of the above cards, Running Interference only gives the runner a benefit if played on a server with mostly unrezzed ice. Since it affects all pieces of ice on that server, it's best used against a server with multiple unrezzed ice. Typically, that would be a previously-untouched scoring server or a server hammered by Emergency Shutdowns and Crescentuses.

The best use of this card, of course, is when the corporation is relatively poor. In personal use, I've found ~5 credits to be where corps are overly confident in laying down an agenda, where this card can do the most damage. Usually a corporation is still able to rez a single peice of cheap ice. Usually, the ice is at very low strength, like Yagura, or is otherwise porous, like Eli 1.0. With that in mind, it's easy to leave a few resources to break or otherwise pass the ice. Note that this doesn't help against troublesome upgrades, like Ash 2X3ZB9CY or Caprice Nisei, so take care to leave an additional click for following up after these cards trigger.

Overall, Running Interference is a strong card as the game moves into the middle stages, where the corporation typically controls the tempo. Decks with multiple run events that hit centrals hard should take a good, long look at Running Interference. Even a single copy can give the runner a significant lead.

(Up and Over era)
hatman 173
If paired with Social Engineering, would the runner gain the overall rez cost of the ice or just the original rez cost? — Cadaver 20 Mar 2015
Social Engineering wouldn't benefit since the cost itself is not increased. There is just an additional cost introduced. — krystman 8 Apr 2015