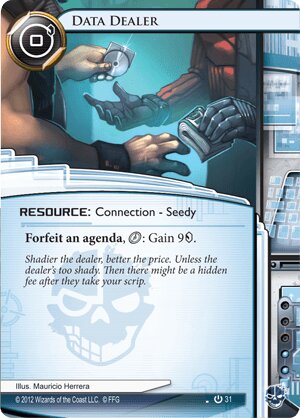 Shadier the dealer, better the price. Unless the dealer's too shady. Then there might be a hidden fee after they take your scrip.
Illustrated by Mauricio Herrera
Decklists with this card

I've been playing with Data Dealer for a while now, and I think it's better, or at least more versatile, than I originally thought. Let's get the obvious out of the way: poison assets (or useless-when-stolen agendas). News Team, Shi.Kyū, et al., all get turned from grief to gold, as 9 is a massive amount of money to get for a single , not to mention the agenda point gain. The problem is, or was, the odds of a corp running them were low enough that you couldn't justify including DD.

Enter Fan Site. Now, even if the corp isn't running said poison, this is still kind of useful. But wait, this has some trouble too, as you need to get the Fan Sites out early enough, and you need to allow the corp to score to even make them worthwhile, and this all assumes you have DD ready to go at some point as well. And finally, Fan Site is out of faction, so you're (in all probability) either importing DD into Shaper or Fan Sites into Criminal. So even with Fan Site, this is still passed over in favor of other econ options.

Finally I asked myself, "What if I actually sacrifice real agendas (i.e. things actually worth points) to this?" Sounds crazy, right? I thought so too at first, until I realized there are times when that is exactly the right thing to do. For example, in a recent game I was way behind; the corp had 6 points scored, and I had only a single 1-point agenda in my score area. He had already burned through his options for fast advance, so what does the corp do? He continually plays agendas into his scoring server, with the hope that I'll eventually run out of econ and be unable to contest them for even a single turn. Desperate, I sell my agenda to the DD, giving me enough credits to contest the server and steal the next agenda. This snowballs, as I now have another agenda to pawn off, and I can just barely afford to break into the server every time he plays an agenda there.

I eventually face-plant into an Aggressive Secretary, and lose the critical breakers I needed to get in to the server. Game over for me? Not so, as the corp has only two cards left in R&D, and, as it would turn out, only one of them was an agenda—the bottom one. It's his final Self-Destruct Chips (corp was playing Cybernetics Division), and he has no way to score it this turn. Even if I have no way to contest the server, it doesn't matter, as I can just sit back and do nothing. When mandatory draw finally rolls around, he's dead.

Was I lucky? Yes. But that's missing the point, as none of this would have been possible without DD. It allowed me to snatch victory from the utter depths of defeat, and turn an impossible situation into merely an improbable one. Sometimes you've just got to cut off the finger to save the hand, and DD lets you do that while keeping you on the edge of your seat in true Criminal style. And it's because of this flexibility that I've really come to appreciate this card for what it is, and what it does. If nothing else, it will probably make for some of the most memorable games of ANR you've ever played. How often does selling off 11 agenda points seem like a good idea?

(Data and Destiny era)
Pikeman 279
I don't think this was mentioned, but if an NBN is running 15 Minutes, and you score it, just sell it next click (if possible), and their chances of getting it back are zero. — esutter479 7 Nov 2015
Yep, and there are a few other agendas like Medical Breakthrough that you might want to sell off as well. I didn't go through the entire list as Waltzard's review covers them pretty well, and I wanted to look more at selling agendas that effectively do nothing more than give you points once they're in your score area. — Pikeman 7 Nov 2015
Also great for those panic moments when you touch a SEA Source or something in their hand and realize there's no way you'll be able to afford that trace next turn. — Bigguyforyou518 7 Nov 2015
7

This card has been in the game since Core, but it is one of those cards which targets a part of the game that isn't fully implemented (poison agendas), and so you have to re examine it every time a new pack comes out. My feeling is with Data and Destiny and the data packs immediately preceding it this card has finally come into its own.

Examining the fundamentals of the card will be brief. It costs 0 to play. It allows you to click for 9 (NINE, for emphasis. People feel comfortable with Magnum Opus turns where you quad click for 8) at he cost of one of your agendas.

So, what Agendas (or Ambushes) are worth forfeiting?

Vs. HB: Domestic Sleepers would be worth forfeiting, but it is basically not played. Mandatory Upgrades might need to be forfeited, if they have Media Blitz

Vs. Jinteki: Medical Breakthrough might be worth sacrificing. Judgement call there. Shi Kyu is worth forfeiting, played in decks that poison archives.

Vs. Weyland: Weyland doesn't have any agendas that are automatically worth sacrificing.

Beyond the silver bullet saves listed above, clicking for 9 is a big deal in its own right. Sometimes it is the right play if you have a 1 point Agenda and a sudden and urgent need for credits (say, you've just snagged a Vanity Project and the Punitives are incoming).

As always, mention must be made of Iain Stirling: Retired Spook , who loves this card because he doesn't just get 9 credits, he can reactivate his drip economy identity ability.

(Data and Destiny era)
Waltzard 386
I can see News Team being included in a Scorch Jinteki deck to force the -1 agenda and fuel Philotic Entanglement, but I'd also mention this is great for sacrificing Fan Site. — Mechanoise 2 Nov 2015
It's also fantastic when you steal an early agenda against Midseasons decks. A common ploy is to naked advance an agenda so that you're damned either way; with Data Dealer you can happily sell that agenda and avoid the Midseasons. — tzeentchling 2 Nov 2015
@tzeentchling - Hate to break it to you, but Data Dealing any stolen agenda will not save you from Midseason Replacement. Midseasons is only interested as to whether an agenda was stolen during the last turn, it couldn't care less about what you did with it afterwards. A good Midseasons prevention is Film Critic because it is never classed as accessed, therefore, never stolen. — Mechanoise 2 Nov 2015
@tzeentchling - To clarify, you can Data Dealer an agenda to help avoid tags through midseasons as you will have extra money at your disposal, but it cannot prevent the corp from using Midseasons. — Mechanoise 2 Nov 2015
That wasn't my point, but I didn't really make it clear I guess. It's more that by selling the agenda to DD, you gain 9 credits with which to fight off the Midseason trace. I suppose if you're that much in the hole that 9 credits won't get you close to their total, then you still will have an issue. But I've used it in the past to match credits with a Midseason deck post-steal. — tzeentchling 2 Nov 2015
4

Added to Core set as a single - not for being good but rather than being worse on its release.
Took a long time until H+P to make sense.

Almost unusable at the beginning, this card is getting better now. The problem is, that its VERY situational, because you have to hit a deck including the combo cards and/or choosing Iain as ID.
There are far better ways to boos your Credits.
For instance a Bank Job with Desperado gains only 1 cred less (installed over The Supplier breaks it even) but is more versatile.

(All That Remains era)
PeterPan 276
News Team has a lot more teeth than Shi-Kyu. No corp payment on access, 2 tags are still quite expensive to scrub, so the runner is very likely to take the -1 agenda point. It's also 2 influence, which is reasonable enough to splash. I think Data Dealer and Frame Job might become a lot more important. — pbrand 3 Sep 2015
2

Usually, trashing agenda for 9 credits is more a desperate move than a winning strategy.

This all change if you pair Data Dealer with Fan Site. With Fan Site, you will get up to 3x 0 point agendas in your score area. Which you can trash for 9 credit each. All for 1 click for 9 credits. Even taking into account installing the Data Dealer and the 3 Fan Site, it is a pretty sweet deal and well worth the include in the deck.

It also allow you to trash negative agendas (Meridian, Shi.Kyu, News Team, Hangeki) and 0 point agendas (Standoff, Project Kusanagi). Remember to thank the corp for that include in their deck, when you shutdown that part of their gameplan with a single Data Dealer.

Anarch will seldom use Data Dealer, because it will cost them too much influences to make sure it is not a dead card in hand. But for Criminal and Shaper, this is good. Especially Hayley, who can install 2 ressources in a click.

In the Netrunner World 2020 (organized successfully by NISEI) the corp that won was a near iceless archetype. That corp used Game Changer to great effect, making that strategy very tough to beat. Data Dealer will completely shutdown that strategy.