Reveal all cards in HQ.

"When you need someone who is a little more hands on, look me up." -Silhouette
Criminal • Smirtouille • Fear and Loathing 84
All sets:
Links: Decklists | ANCUR 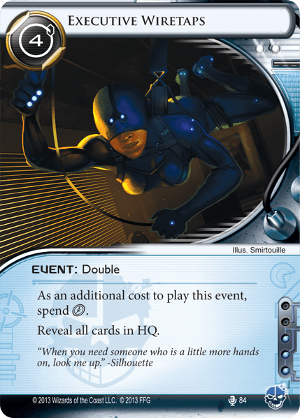 Knowing what the corporate executives are up to can provide so much intel to the runner so as to send the whole house of cards falling down, or the runner might just overhear mundane office gossip and leave the him or her wondering whether the resources spent could have been better used elsewhere.

Big push: After playing Executive Wiretaps (say for first two 's) runner could then follow up with Planned Assault to hand-pick any run even that from the stack that suits the state of cards in HQ. A bunch of Agendas? Legwork might suit well, nothing worth accessing? Perhaps Account Siphon instead. Lots of Agendas but Ice is too taxing? Stimhack might do the trick.

Double synergy: With up to 13 different Double cards for the runner currently available, Starlight Crusade Funding (say with Adjusted Chronotype?) encourages the runner to "double-down" on Doubles cards possibly mitigating the cost if playing 2-3 double cards in a single turn. With such a strategy the runner is likely to accrue a number of Doubles in the heap making Power Nap potentially a very effective

Because knowing is how you know stuff: Silhouette: Stealth Operative's ability to expose cards in addition to pulling back the curtain on HQ with Expert Schedule Analyzer or Executive Wiretaps followed up with Bug's ability to keep up-to-date with future card draws could give the corp player a strong sense that the room is rather drafty

Revealing: the distinction between "accessing" vs "reveal" is a big difference. Revealing cards with Executive Wiretaps allows the runner to learn information while safely avoiding ambushes like Snare! & Shock! etc.

Bluffing Takes a Hit: Many resources are often spent conventionally running on HQ in the hopes of maybe pulling an agenda, with Executive Wiretaps the runner can avoid traps and learn whether HQ is really worth going after, with possibly two remaining s to exploit the information learned. Additionally future turns maybe similarly compromised as the runner can use information learned to full effect and adjust strategy accordingly.

Costly: as a double (costing an extra to use) and 4 to boot, Executive Wiretaps is not a card to play willy-nilly.

Random: Executive Wiretaps is not a card that can be depended on to move the game in the runners favor, card reveals may be worthless as often as they are fruitful, but expensive in either case.

Knowledge is power, and if your running style is to conservative and risk averse Executive Wiretaps has something to offer you.. for a price. While currently not a very popular card, more Double synergy for example may give runners a reason for a second look.

(Data and Destiny era)
chris_walker 610
Psychic Field doesn't trigger on access/expose while in HQ anyway. Are there even any cards that trigger on expose while in HQ? — TheNameWasTaken 18 Dec 2015
Thanks TheNameWasTaken, yeah no question I need to take Psychic Field out, as ice though, could It's a Trap! still fire if exposed from R&D or HQ etc? — chris_walker 18 Dec 2015
You do not expose cards in HQ, you reveal them (you can only expose installed cards) so anything that fires off of expose effects would not fire off a reveal effect. — forktines 18 Dec 2015
Thanks Forktines, fair enough. — chris_walker 18 Dec 2015
re: "you can only expose installed cards" - I don't think that's the case. Sure, the currently existing expose effects all target installed cards, but I don't think any rules say "uninstalled cards cannot be exposed". A card that exposes HQ or RnD could still be created - and the difference between that and a revealing card would be that Zaibatsu can prevent expose, but not reveal. — TheNameWasTaken 19 Dec 2015
Bkackguard is a noteworthy synergy card. — Krams 19 Dec 2015
@Krams - with wiretaps? How? — TheNameWasTaken 19 Dec 2015
Sorry, my mistkae. I confused reveal and expose. Just ignore my comment. — Krams 20 Dec 2015
I want to love this card and Expert Schedule Analyzer, Just feels bad when you draw this when you want money or a something else. The cost is also high, but if it takes more than 4 credits to get into HQ, it could be worth it... — lemonwood 20 Dec 2015
I don't see why you wouldn't just use Schedule Analyzer — MightyToenail 11 Feb 2016