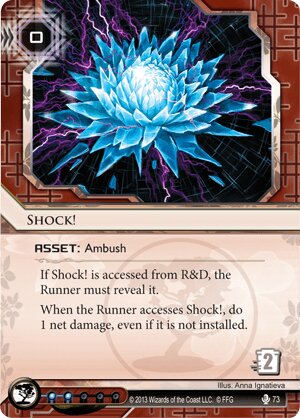 While the Runner is accessing this asset in R&D, they must reveal it.

When the Runner accesses this asset, do 1 net damage.

Illustrated by Anna Ignatieva
Decklists with this card

This card is for the trash! No literally it's not a bad card, far from it, unlike Snare! and other Ambush cards Shock!'s ability remains active even when accessed in Archives so it can actually be used to effectively make Archives a very nasty place for the runner to visit.

Trash it: 3 copies of Shock! in archives can land 3 net damage onto the runner when Archives is accessed. 1-3 copies of Shi.Kyū could threaten even more forcing the runner to eat negative agenda points rather than take the flatline. Did the runner score some agendas? Jinteki: Personal Evolution would could make a flatline event even more likely.

Flatline with assist from ice: With 3 copies of Shock! in archives some net-damage inducing ice like Komainu, Neural Katana etc protecting Archives may open up a flat-line opportunity. Certainly use a House of Knives token if available! (Not quite flat-lined? Perhaps finish the runner off with a couple Neural EMP when corps turn rolls around)

Uncooperative runner?: Got a runner with a light grip and archives all setup for the kill? Bait the runner with an agenda in a remote server then put Susanoo-No-Mikoto on the server (particularly if the corp sees the runner only has Mimic or no killer able to handle a heavy sentry) If the runner doesn't go for the bait, keep advancing agendas!

Quickly fill archives: Using Jackson Howard the corp can quickly mill through R&D increasing the likelyhood of finding Shock! & Shi.Kyū etc with the express purpose of discarding them. Meanwhile using operations and other cards that Jackson Howard is bringing into HQ to full effect. Not fast enough?: Power Shutdown can really trash cards from R&D in a hurry (probably will want to think about having 1 point agendas-only, really nice trick if the corp can have The Board installed when runner accesses Archives to mitigate all those one-pointers!, very likely game over if the corp is able to follow-up by scoring Philotic Entanglement.
Haarpsichord Studios: Entertainment Unleashed could certainly work here too slowing the runner's scoring ability down while each time while at the same time possibly opening a flatline opportunity every time the runner runs on Archives.

Intolerable Cruelty: With 3x copies of Shock! in archives, The Future Perfect could be a fun agenda to bait the runner with, again accopanyied with a House of Knives token or followed up with Neural EMP could make for a game ending scenario that the runner may be tempted to gambit multiple times if the psi-game fails

Showing a little leg: with Celebrity Gift for can actually serve multiple objectives if all the corp shows are Shock!, Snare! etc heavily discouraging the runner for going after any agendas that the corp didn't show in addition to the .

Advance: Even though Shock! isn't advance-able, cards like Tennin Institute: The Secrets Within Mushin No Shin can give the runner the appearance that it's an agenda goading the runner to waste time and resources only to pickup a net damage.

Protect Assets & Upgrades: Since Shock! is most powerful when 3 copies of it are in Archives, in combo with Industrial Genomics: Growing Solutions gives the corp a bonus for doing what it already wants to do in discarding Shock! thereby helping to make Ash 2X3ZB9CY, Caprice Nisei ect a little more costly to .

Archive Poison: Active even when in Archives may negate the need for corp to even expend resources to protect Archives. Better yet possibly can open up a flatline opportunity.

Trashing Tax: Unlike Snare! and other ambush cards Shock!'s costs 2 to as opposed to 0, this is particularly helpful if accessed while in R&D or HQ

Catch 22 If runner does trash Shock! it ends up in archives which is where the corp may have wanted to put it anyway.

Cheap: unlike Snare! for example, for 0 at the corp can fire for Shock!'s 1 net damage even when broke

Weak by itself: As an asset Shock! is rather mild at only 1 net damage and no tags etc

Limited Bluffing: Since Shock! is not advance-able it can be difficult to bluff the runner into running onto it as an asset

Shock! is right at home with Jinteki at two influence point and needing 3 copies to be maximally effective in Archives it's rarely seen out of faction. Still with it's ability to poison Archives it stands out even among other Archive active cards such as Shi.Kyū, Cyberdex Virus Suite etc particularly in when it comes to dealing out the net-damage hurt.

(Data and Destiny era)
chris_walker 685
Previously sroced Philotic doesn't do anything. You need to score it AFTER the runner steals it — Shieldwall 11 Dec 2015
Personal Evolution does not fire off of a Shi-Kyu. The agenda must be "stolen", not "added to the runner's score area". — forktines 12 Dec 2015
Chris, your dedication to card reviews is admirable, but the volume of them you've decided to crank out vastly exceeds your actual knowledge of the game. Please, spend some more time playing with these cards before you review them — Felbunny 12 Dec 2015
Catch 22 section also has a minor typo. You meant 'Corp' instead of 'Runner'. I also like — LynxMegaCorp 12 Dec 2015
Thanks Shieldwall, changed the scored future tense for Philotic Entanglement I'll admit I was in a hurry this morning. Thanks forktines, I've removed the link between Personal Evolution and Shi-Kyu there is still a combo there, just not as strong as I stated. Felbunny, appreciate your encouragement, I readily admit I'm prone to error from time to time, I trust though that by fixing errors in the timely manner what the community ends up with is an accurate semi-long-form review that helps other players see a place for other-wise overlooked cards. — chris_walker 12 Dec 2015
Thank you Lynx Kuroneko, yes typo indeed. It has been fixed. By the way when you say *I also like* are you referring to the Catch 22 statement or something else? — chris_walker 12 Dec 2015
Sorry, had to run. I also like it in Haarpsichord Archives. — LynxMegaCorp 12 Dec 2015
You can bluff with Shock! if playing never-advance. In my Tennin deck, I almost always install my Shock!s for a turn before discarding them to see if the runner wastes resources on it. — enk 12 Dec 2015
I agree with you enk, as the review already cites the bluffing ability when combo with Tennin and Mushin. My statement in the cons section simply states that (without a combo) it's harder to bluff the runner. — chris_walker 12 Dec 2015
Thank's Lynx Kuroneko, I've added Haarpsichord Archives to the review in the *quickly fill archives* — chris_walker 12 Dec 2015
Hokusai Grid on Archives combos well with Shock!s, adding yet another threat if they decide to run (or you AOYCR). — Sabin76 14 Dec 2015
Allele Repression in IG to counter an HQ multiaccess is another good one. — GrantZilla1979 18 Dec 2015