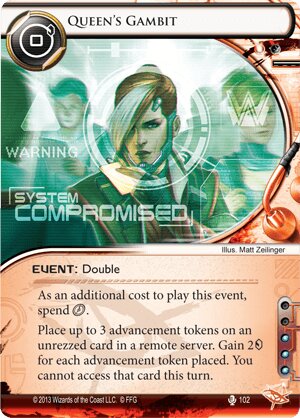 Place up to 3 advancement counters on 1 unrezzed card in the root of a remote server. Gain 2credit for each counter placed this way. You cannot access that card for the remainder of the turn.

Queen's Gambit is, at its heart, situational economy.

How many times have you been in a situation where there was simply no way you could break into a (remote) server? This is a card that lets you acknowledge that something is temporarily out of reach in exchange for 6 credits.

My Favourite economy card in the game, while many people may favour the unflexible "Day Job" I prefer not to spend my entire turn for +8 Credits.

Here is Break down: 1. Queens Gambit has no Activation cost: (except their being a face down asset) 2. Queens Gambit gets you the same number of credits in a turn as Day job: Click, Click=6 ,Click +1, Click +1=+8 same as day job 3. Queens Gambit doesn't take you entire turn: Tempo Loss is a massive thing that kills Anarchs the number of times in tournaments I'v seen Anarchs end their turn on two credits is to high, when they do that I know that they are going to "Day job" next turn and that I have two turns to do whatever I like, like scoring any 5/3. 4. Queens Gambit can be used to check for Agendas: Ok this is a weird one but...if you advance a card three times and then the corp still doesn't score it, it is defiantly not an Agenda, sometimes you need to know these things before you waste your time running through a server to see it. 5. Your not going to advance and Agenda: Its actually pretty hard to mess up those advancement counter, due to the Sheer number of Jackson Howards, Boot camps, and Cyberdex suits, so its easy money.

The worst the Queen has ever done for me is playing two of them to place 6 advancements on a project Beale, which they then advanced three more times for five points. Yeah that was bad, but I still went to win the game, which is miraculous, but I had so much money he couldn't keep his economy up, let alone his San San city grid.

Very good card, but I think that's just me having weird preferences in this game.

cool mysterious voice: i shall play the most powerful move i have ever been taught in my years of chess-netrunner training! Queen's Gambit! I place three advancement tokens on this remote server, knowing full well I could be advancing a secret agenda, potentially costing me the game! DUN DUN DUN

(Earth's Scion era)
Agenarchi 88
That's just wrong xD — Krams 13 Jun 2017
So in the end you paid 3 clicks and 1$ to gain 6$ for a net of 1.6$ per click... — TheChronicler 13 Jun 2017
@TheChronicler, I don't this was meant to be taken seriously. I suggest it was an attempt at humour and to justify the existence of Exploratory Romp. — lunchmoney 14 Jun 2017
Let behavior like this continue and eventually someone will think Record Reconstructor belongs in a deck. :P — TheChronicler 14 Jun 2017
Moot point due to rotation, but if there's only one card in the remote server could you use exploratory romp? There's no access to replace. — Amputret 25 Aug 2017
"You cannot access that card" should rule the same way as Eater's "you cannot access more than zero cards." You still finish the run and get an "access cards" step, but you can't access THAT card. Replacement effects are fine. — Dirjel 17 Nov 2018
1

So i bought a Japanese copy of the run like a champ deck and ice notices t the Queen's Gambit has a cost of 3 rather than 0. Typo? Error? Was it errata'd? It is full art. Does the English full art cost 3 or 0?