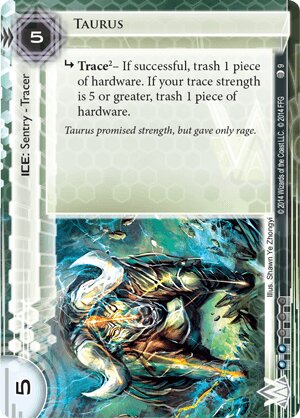 Taurus promised strength, but gave only rage.
Illustrated by Shawn Ye Zhongyi
Decklists with this card

This is a 1x autoinclude for any Blue Sun: Powering the Future or Argus Security: Protection Guaranteed decks I build, as I've found it to be by far the easiest way to trash up to 2 troublesome Plascrete Carapaces. This paves the way for an easier flatline win via Scorched Earth. I've even considered splashing it in a Near-Earth Hub: Broadcast Center deck designed to run Scorches, as it has the extra influence to support it, but since NEH can run Flare in-faction, Taurus might not be worth it there.

The icing on the cake it that the effect is still valuable even if you don't care about Plascretes -- after all, sending the Runner's console to the heap (especially big ones like Monolith or The Toolbox or other important hardware (HQ Interface and e3 Feedback Implants come readily to mind) is always enjoyable :)

(Order and Chaos era)
KitsuAeryn 293
It's important to note that Taurus effectively costs 8 to rez, unless the runner has less than 4 credits, so its cost is comparable to Flare. — EnderA 28 Jun 2015
Well, only if you want to trash 2 pieces of hardware. But they'll probably meet your link strength, so the real rez cost is "5+1 less than the Runner has" — weylandcon 16 Sep 2016
So this can trash two pieces of hardware? — FightingWalloon 14 Jan 2017
Yes, it's a instant trash of Şifr if you pay 8 credits on first encounter :) — lorion42 15 Jan 2017
Assuming the Sifr player isn't able to insta parasite it. — MasterPrudent 12 Feb 2017