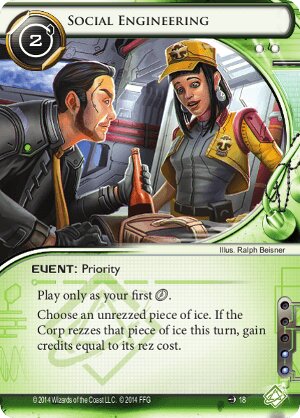 Choose an unrezzed piece of ice. If the Corp rezzes that piece of ice this turn, gain credits equal to its rez cost.

Have you ever just wanted to be a little like Nasir? This card is your answer! For two credits, you can gain all the benefits of Nasir without needing to build your deck around them. This card obviously combos best with cards which increase the rez cost of ice (currently Reina, Rook, and Xanadu) and cards which let you know which ice to rez (anything with an expose effect). For that investment, you gain a potentially decent economic gain.

The drawbacks of this card are enough to have kept it from seeing almost any play since its release. First and foremost, this economy card relies on the Corp agreeing to help you out: should the Corp not rez the ice, you're out two credits and a click. While the card then functions as a mild form of bypassing ice, the unreliability of either option (and the fact that it's the Corp who chooses which to trigger) is problematic. Secondly, this is a delayed economy card, since you don't get the credits until the Corp rezzes the card itself. This means you can't rely on the credits for that run -- you instead need to be prepared to run beforehand, and you'll (potentially) get rewarded for it after the fact. Thirdly, you need to be targetting high rez ice to make this really pay out, and those are the same ice you want the Corp to rez least. Targeting an Eli 1.0 with this would be functionally equivalent to clicking for a credit, which is hardly breathtaking for a two-influence card.

In short, Social Engineering is a delayed, circumstantial, unreliable piece of economy. So what does it have going for it? Most of why you'd want to run this card is right in the title: Social Engineering. This is a card that Corps are not expecting, and it gives them a bit of a choice. Played on a piece of ice on a key server (R&D vs. a Shaper or Medium deck, for instance), this is almost guaranteed cash, but it will still make the Corp pause to think about whether or not to actually rez the ice and pay the Runner. On a less-critical server, this may actually give the corp reason to not rez the ice -- but then, is it such a hit if they don't? Remember that they get to make their decision when you encounter the ice, not when you play the card, so you're not likely to get to trick them into agreeing to something they don't want to.

Finally, it's worth discussing this card in the context of a Nasir deck: Is it worth it including this to try and double-dip on Nasir's ability? Possibly. The timing works out as follows: You approach the ice, the Corp rezzes it, you gain the money from Social Engineering, and then you have a paid ability window before you encounter the ice (this is where people burn their pool of credits on things like Self-modifying Code or Personal Workshop), and then you lose all credits and gain credits due to the identity's ability. This means that Social Engineering can be used to give you a large boost of credits right before Nasir's ability triggers, and the utility of that is entirely dependent on the deck you build. Any strong Nasir deck will have a way to dump credits for something of value before his identity ability triggers, and Social Engineering is a possible shot in the arm to those abilities. However, Nasir already suffers from an unpredictable, swingy economy, and I feel like something like Social Engineering can only make this unpredictability worse. While it could function as a damage-free alternative to Stimhack (in that it gives you a new pool of credits to dump into your paid abilities), most Runners prefer the guaranteed larger wad of cash to the variable pool you get from Social Engineering.

It's hard to argue that this card has been passed over, and looking at what it does, it's not entirely surprising. That said, Social Engineering provides a unique combination of economy and ice manipulation that isn't available anywhere else. For that reason alone, it's worth keeping in mind, particularly in decks which are able to consistently increase the rez cost of ice.

(The Universe of Tomorrow era)
jmbostwick 91
The other way to use this would be in decks that force rezzing of ICE. Most of these cards are in Criminal, but you could consider combining this with Forged Activation Orders or Blackguard to semi-guarantee a payout. Good enough for a 2-influence import? Not usually but it's another thing to keep in mind. — LeonardQuirm 3 Sep 2015
Seeing as it penalises a particular ice rez, I think it's worth comparing this to Inside Job. Influence concerns mean Inside job is a way better choice in criminal. In anarch it seems neither is worth it, especially now Ddos exists. So this is a card you play in shaper if you want to disincentivise the rezzing of a particular piece of ice for a turn, influence free. Seems pretty niche. — Greasythumb 4 Sep 2015
It functions as a nice facecheck safety net. Since you get the credits immediately, you can use them with a relevant breaker to avoid nasty consequences. — LordRandomness 27 Jan 2016
2

Nasir: Cyber Player looking at the card art he gets paid and he gets laid. If this card worked as smoothly as he does we would all be playing it.

Unfortunately the tricky set up conditions (DDoS? EMP Device? Inside Job?) and potentially negative net profit (if you target a Pop-up Window, Ice Wall or Yagura) coupled with the fact that it doesn't do much to help you get into servers means that only Nasir gets to live the dream.