Your memory limit is equal to the number of cards in your grip.

"Sometimes you just need a brain in a jar." -g00ru
Anarch • Lorraine Schleter • All That Remains 93
All sets:
Links: Decklists | ANCUR 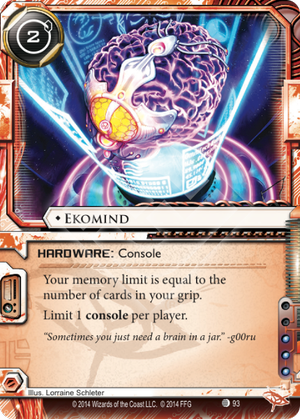 Let's face it, Ekomind sucks on its own. Net and meat damage are potential program trashers, and brain damage... Well, Eko isn't a brain in a jar for nothing. And forget installing this thing without some backup - installing out of a 5 card hand returns you to 4 max memory, effectively wasting 2 credits. You need to have origami's out and up before you even think about installing this.

Before you dismiss this card though, let's take a look at the current meta. Corps have gotten faster, meaner than ever. Don't count on a long early game when that NEH: BC sets up 3 PADs, 2 Marked Accounts and a 2 counter Reversed Accounts by turn 3, and good luck closing the Blue Sun econ gap if you don't break that OAI'd Curtain Wall turn 1. With the rise of E3 Quetzal and Emergency Shutdown Leela Patel, Ekomind seems like the most useless early game console in print. That's because it is.

Ekomind isn't an early boost. It's a planned rigbeast. Want to scare the corp? Screw that turn one Overmind on Quetzal. Install Eko and Joshua B on turn one, then draw away. Turn 3 you can have an 8 counter Overmind, ready to tear up any server you want with a Stimhack. Once you add E3 and Duggar's to the mix, Joshua B for a 5th click, then Duggar's for 10 cards and install another Overmind. Boom, that 5 card hand just became a 13 counter Overmind with E3 picking up the slack. With one memory eaten, Stimhacks become keys to any server you want. Put 3 origami's down and the same strategy goes from 13 counters to 19. Add in a Cuj.0 for free Swordsman breaks and you've got yourself a free pass anywhere you want. Here's the thing you can't miss, though. That's what Ekomind was made for.

With Ekomind, you can unlock your anarchs lategame. Ekomind + 3 Origami's = +6 Memory, more than you could possibly care for. You're a runner for Christ's sake, run! You don't need a Monolith turn 2 to beat the corp. Why is waiting a few turns for some setup going to kill you? Duggar's yourself, get those Origami's up and running. Hell, toss in a Djinn to make those Origami's go from +6 to +8! That kind of memory wasn't made to be eaten up, it was made to be counted. If you need 12 max mem to beat a corp, you need to relearn how to run. Eat a stimhack, eat damage, who cares? You have the hand size, you have the free mem.

No one's calling Ekomind versatile, just good. So before you start bashing it, toss 3 Eko's in with some Origamis, Djinns, Duggar's, Joshua Bs, Overminds and E3's. Walk into those servers like you own the place, you might as well.

There are definitely combo decks that can be built around this. I have no question there. I'll talk about those in a minute. First, I want to talk about the card in a vacuum.

By itself, this card is just bad. When you have 5 cards in your hand, this card will boost your base memory limit from 4 to 5. That's it. I'm fairly certain any memory bonuses stack on top of that (so it takes Chaos Theory from 5 to 6, for example) but that's it. Put into a normal deck, this is +1MU for 2 credits, which is worse than Akamatsu Mem Chip. It also eats up your console slot.

Then there's the giant downside. If you have 5 memory worth of programs installed, and your hand size goes down for any reason, you have to trash programs. Play a card without drawing one first? Lose a program. Take damage? Lose at least one program (maybe more, depending on how much damage). Suffice to say, in a normal deck, playing this card is usually worse than not playing it. Not just worse than playing another card, but worse than not playing it.

So, obviously you're not just going to toss this into any old deck. With all that potential for downside, what's the point of this card? Well, it does have a few powerful synergies. With 3 x Origami, your maximum hand size becomes 14. Fill that hand up (possibly by using Duggar's), and you have 14 memory. Granted, 3 of those memory slots are taken up by Origami, but that's still 11 free memory. There are other ways to increase your hand size and/or memory, too, but that's the most obvious.

Once you do that, what do you do with all that memory? Well, the only thing that really does a lot with it right now is Overmind. But it sure does do a lot. It doesn't seem all that hard to get 10 Overmind counters, and if you work at it, you can get a lot more (by using Duggars when you're already at maximum hand size and either having an extra click from a card like Rachel Beckman or installing Overmind using something like Clone Chip right before you discard down to your maximum hand size.

The advantage of using Ekomind in this manner is that you don't need to keep your hand big after you use it. Once you have your massive Overmind in play, you can let your hand size go back to a normal size, maybe using Levy AR Lab Access (since you've probably discarded most of your deck by that point, and might want to use some of those cards for something). While having a giant hand size might have some advantages (such as ignoring damage) it also has at least one pretty big disadvantage. His name is Komainu and he sees a lot of play.

At the end of the day, is an Overmind that big worth all that effort? Probably not. You still need to boost strength up from 0 every time you want to break something. It's not like you're breaking things for free. Against an HB Iceberg deck, you may only be able to get 2-3 good runs out of it, and those runs will be about as expensive as they would be with normal Icebreakers.

It's possible that some even stronger synergy will come along later, but for now, I don't think you're going to be seeing this card on any tournament-winning decklists.

Remember about public symphaty. Use them instead of origami and you will gain another memory slots for Overmind. Now you can play Quetzal with Magnum Opus and Keyhole.with no memory problems. There is no need to splash akamatsu. only few Retrival Runs and Deja Vu for eventual losses.