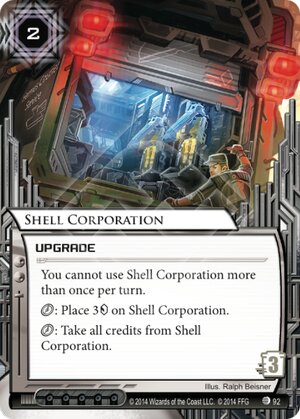 You cannot use Shell Corporation more than once per turn.

The key to this card is its type.

By virtue of being an Upgrade, and not your usual economy Asset, Shell Corporation allows near-infinite options. You can install it in the root of a Central server, for example the Archives full of Shock! or Shi.Kyū, or maybe in a Remote server, together with an Ambush-type Asset.

It can become almost permanent, if such a thing is even possible for Corp cards, because a Runner will hardly go on a server with an unknown card advanced a few times, especially if he has reasons to believe it could lead to a flatline or to other dangers.

In tag n bag you might wanna install it with Ghost Branch. If they wanna trash Shell Corporation they will have to take a few Tags. In an Haas-Bioroid you might go for Cerebral Overwriter or Aggressive Secretary. The first works anytime, the latter might be more useful in late game.

Shell Corporation is not a card that's useful absolutely, but it's a wonderful card because it's the first of its kind and offers an entirely new kind of mind game. In Jinteki it obviously shines, given how they have most of the dangerous cards and can make even Archives a nightmarish server to thread upon.

In the other Corps it might take some working around it, but it can be a valid economic option. It can also become sort of a protection from the all-time-dreaded Account Siphon. It works exactly like Kati Jones after all, so if you charge some credits on it, you can take them back after a Siphon.

I was just getting my mind completely blown by a non-unique upgrade Kati Jones until I suddenly realized that it doesn't say "Place 3 credits from the bank on Shell Corporation." Unless that's a typo, my mind is no longer blown. It's more like a sorta different Sealed Vault.

Observe the text on Ice Analyzer. This is indeed a Corp Kati Jones. Perhaps not the best economy given the limited clicks of the corp, but powerful in a mindgame ploy. Beware of Queen's Gambit, though. You might actually want to rez that Cerebral Overwriter!

The fact that this is an upgrade and not an asset is really weird to me, but allows for a lot of interesting things, and makes this card a lot stronger (although you lose the ability to tutor it, as I don't think there are any upgrade tutors) as you can put something in it to protect it. And if you're playing weyland, may as well play to flavor and just let the runner know straight up that you'll destroy them if they come in. Nonideal, sure, but c'mon, live a little.

I absolutely love this card out of Jinteki Replicating Perfection. In addition to having your Sundews and Mental Health Clinics and whatever other drip economy you like, a single Shell Corporation stacked onto a triple-advanced trap (coughmushinnoshincough) is absolutely delicious for your economy. Sure, it's a lot of setup, but once you get it going, the Runner will never run to trash your Shell Corporation, and you will always have a ready source of money to draw from in case you get Siphoned to 0.

(Order and Chaos era)
postalelf 68
They don't have to access the other card. They can just access and trash the Shell Corp. — Xh4rx4d 25 Mar 2015
Straight from the rulebook: "Remote Server: The Runner accesses all cards in the server." — LynxMegaCorp 29 Mar 2015
Lynx is correct, but the runner can do one strange thing: use Queen's Gambit on the face-down trap and then run the server. When they access, they only access the Shell Corp. Giant edge case, though. — pbrand 6 May 2015
1

Yeah that has to be a typo or a new card template, because this card isn't even playable if it's not. There is absolutely no reason to A. rez this thing for 2c, and B. start putting your OWN credits on it for someone to come along and trash it.

Sealed Vault is only 1 inf so even if this were a mildly effective Vamp/AS deterrent (which it's not), if you want that type of effect you're gonna bite the bullet and spend the 2-3 inf to play Sealed Vault.

Has it been definitely clarified whether this is the Corp Kati Jones or merely an interesting place to put your own money? It seems sort of too powerful if the former and not powerful enough if the latter. Any final word?