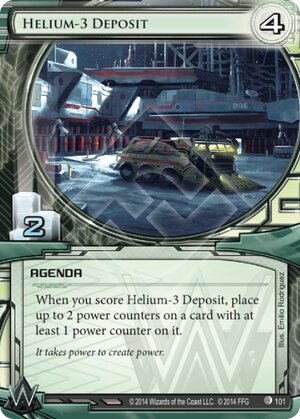 It takes power to create power.
Illustrated by Emilio Rodriguez
Decklists with this card

With the cards currently available, this is a pretty weak agenda. It has very limited useful targets, most of which are of limited utility. It would only need one or two good targets for this to shine, but I don't think they're released yet. I just wish it allowed you to add agenda counters :(

Ultimately it's competing with some other decent 4/2s like Corporate War (fantastic in BS), Geothermal Fracking (Weyland rush/scorch staple) and NAPD Contract (in no BP Weyland builds).

Data Raven, Viktor 2.0, Snoop, other power counter ice - while good targets, it's pretty rare to get the initial power counter and I wouldn't include a 4/2 on the off chance that I found my Viktor 2.0, they ran it and couldn't click it/break it/beat the trace.

IT Department, save two clicks, not really worth it unless you are chaining agendas

Dracō - I rarely see draco in weyland but only really a 2 credit saving.

(The Source era)
tiggy 8
Gift more power counter to personal workshop. Make runner happy :) — vjhorse90 6 Apr 2015
I find the fact that it sabotages Atman to be kind of hilarious... — LordRandomness 16 Jan 2016
Chief Slee is a new target for this — FightingWalloon 2 Jan 2017
5

Me: Say hi to Chief Slee

tl:dr: terrible combo that's totally not worth it

Power counters in weyland are not extremely intersting; Data raven you usually won't be allowed the first one (and shouldn't need more if you do get them, either you have the kill or you don't) and running this over a more solid agenda, and Viktor 2 over any other similar card just for the synergy seems very bad. The only card I think this is good with is IT department, but if that is your only synergy, maybe another agenda would still be better.

It is interesting to note that the card does not have to belong to the corporation. This can be used to flood a stim dealer a turn early, or even to make their plascrete better (don't know why you would do that!)

(The Source era)
GammaCodeX 57
@GammaCodeX: You forgot Atman, which Helium-3 Deposit murders. Brutally. And I don't know, using this on Viktor 2.0 actually sounds kind of amazing. I agree though that currently there are better agenda options for Weyland, but who knows what the future might hold. — Kroen 27 Dec 2014
0

So far I really like this agenda with IT crew. Allowing it to place a more counters on it so you can do more shenanigans with you IT crew, making it much harder for the runner to break through the ice.

(The Source era)
Shockingcat 99
You can also use this with Quicksand. — nordicstrike 7 Jun 2015
0

MCA Austerity Policy was almost certainly printed to make this agenda playable again. Obviously having Helium-3 Deposit scored at the right time would be a challenge but definitely not impossible - an example just off the top of my head would be as follows:

1) At some point, have MCA Austerity Policy on the board. Place a power counter on it.

4) Use your remaining click to get three more clicks. Revel in the jank.

Most of the other cards that use power counters have been discussed in @tiggy's review below; however there are a few notable additions to the power counter suite that allow for interesting new interactions with Helium-3.

Free Lunch will probably not be seeing play in your Weyland deck, unless you're playing some kind of porous successful-run based murder play. But it is also a card that is likely to see power counters, unlike Data Raven and its cousins. Two extra power counters on it counts towards the Runner losing 1, 2, or 3 at any point, maybe even at a critical juncture. (jank: right before a psi game?)

Chief Slee has been mentioned already, as two power counters go a long way towards making those critical five. Two extra power counters on her counts towards... death???? (it's death)

tl;dr - MCAAP makes Helium-3 relevant again when it becomes legal?! News at 11. Also some other thoughts on new cards and their interactions with Helium-3 (it still kinda sucks on that respect)