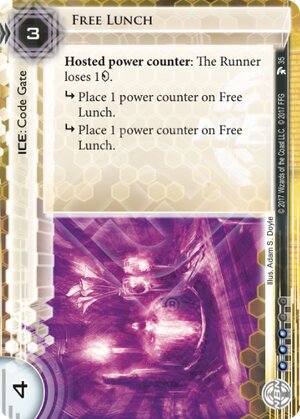 Named for the concept of TANSTAAFL, short for "There Ain't No Such Thing As A Free Lunch", a term thought to come from a time in American history where bars would offer seemingly free lunches...full of horribly salty food that would then make you want to buy their drinks! No such thing as a free lunch, indeed. This ICE continues the tradition by looking like it can be walked through for free, but then costing you two credits later if you decide to do so.

How good is that? Well, it's essentially presenting a choice between paying more to break it now or paying less later...except that the corp gets to pick when "later" is. This is very, very bad if the Corp decides that "later" is when you needed those credits to stop Hard-Hitting News.

On the other hand...you can just set aside two credits when you walk through this and pretend you don't have them, and the net effect is essentially identical to paying 2 to break this ICE. Which given you don't need a Decoder to do it and this ICE cost 3 to rez means you're basically relying on the Runner not doing that in order to get good value out of this thing. Maybe you can pressure them into spending those credits, but then you could have just used ICE that cost them 2 up front to get through and they wouldn't have the option to spend those credits at all!

The only real difference between this and a flat 2 credit tax is that this can trip up Runners that make a mistake, and that this leaves the credits in the Runner's credit pool. It's in the latter point that this ICE finds its use: If they set aside credits to cover the power counters on Free Lunch, you can drain those credits with Closed Accounts or Reversed Accounts or other credit draining tools (hi there Spark!). Free Lunch then lets you keep the Runner poor for an extended period of time. Basically every counter on Free Lunch means you can drain the Runner down to negative credits, a fact that makes me sad this card has no synergy with Student Loans.

So that's Free Lunch in a nutshell. It fits the mold of "good rez-to-power ratio" ICE that the Runner can avoid breaking for a price, with the price being that they become more vulnerable to credit drains (which NBN specializes in). As is normal for these things, you put it in a deck where the alternative cost is particularly nasty and this incentivizes the Runner to break it instead, in which case you've gotten a 4 power 2 sub Code Gate for 3 credits (a good deal, if Eli 1.0 is to be believed). Now I'm off to ignore everything I just wrote and build a High-Risk Investment deck with it instead.

(Station One era)
LordRandomness 232
Thanks for teaching me the origin of TANSTAAF! — HollowsHeart 24 Mar 2017
Fun Fact: The saying became popular due to its usage in Robert Heinlein's book "The Moon is a Harsh Mistress." Heinlein was a major inspiration for Netrunner! — Handsome Jack 24 Mar 2017
Mumbad Virtual Tour can also be used to force the runner to spend credits from the "set aside" pool, which can leave them in a bad spot. — Netrunnerunner 24 Mar 2017
Closed accounts now puts the runner in debt. — diracdelta 25 Mar 2017
1

This ice gets much more deterrent power in GameNET: Where Dreams are Real. Letting the subs fire just once banks the Corp a net 4 credits of swing during any run, including the current one. That can be just the thing to push a Bellona out of an inattentive Runner's reach, for instance, or throw off their run math.