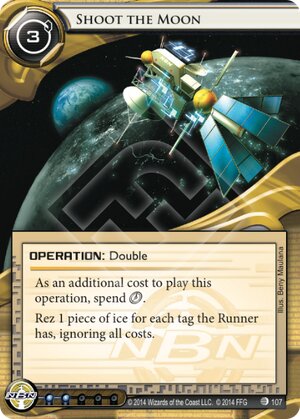 Rez 1 piece of ice for each tag the Runner has, ignoring all costs.

Illustrated by Beny Maulana
Decklists with this card

A double with incredible setup requirements to justify its costs and overall difficulty. For starters, you need to have been able to tag the runner to at least the level of ICE you have set down, unrezzed. However, depending on the cost of ICE in your deck, even one tag can make a huge difference. NBN has several pieces of high-cost ICE, such as Thomas the Tank Engine, Tollbooth, Flare, and even Information Overload, which also has serious synergy with the tag-storm that this event loves to see. This can be a poor man's Oversight AI with even one tag, but having to tag the runner makes this much more situational. Combined with an already advanced Breaking News, this makes for a very efficient maneuver.

However, against my sparring partner, the Hail-Mary play of Midseason Replacements into Shoot the Moon has led to rezzing at least 5 cards at once. If you can create a scenario where you have both of those events in your hand along with an agenda that you are okay with losing, such as TGTBT or Explode-a-palooza, then you should aim for the stars! News Team, Restructured Datapool, or SEA Source can work as well with this as well, just not as well as Midseason. With a traditional deck, this event is probably not worth it. However, if you plan to drown the runner in tags AND have expensive ICE, add this event in! However, since it is hard to tutor, don't expect it every game.

(Old Hollywood era)
Steamwood 284
A few thoughts: unlike Oversight AI, the ice isn't destroyed when they break it. Additionally, the upcoming identity SYNC makes it more difficult to remove tags, increasing the chance that they will have one. — tiedyedvortex 24 Aug 2015