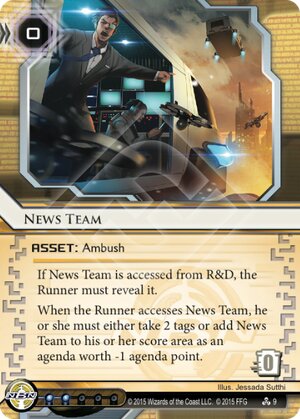 If News Team is accessed from R&D, the Runner must reveal it.

When the Runner accesses News Team, he or she must either take 2 tags or add News Team to his or her score area as an agenda worth -1 agenda point.

One of the most annoying cards to be released in awhile, News Team is NBN's new in-faction ambush, very often played as a passive central defense like Snare! or Shi.Kyū.

As an non-advanceable asset trap that doesn't need to be installed, this can be shuffled into your deck to discourage digging, held in your hand to punish Legworks and Gang Signs, or installed on the board to bait an aggressive runner into it. Perhaps most alarmingly, this ambush will fire in Archives, meaning that if they access and trash it, they've just inadvertently turned Archives into a pit of nastiness.

The comparison to other ambushes is important, especially with Snare!, which is the gold standard:

I feel this last point really needs to be stressed. You'll notice those other "choice" cards are ones that rarely see play, and there's a good reason for that. Allowing the runner to pick the least harmful punishment is a massive downside to any card. While it's easy to dream up contrived situations where both choices are terrible for the runner, in the vast majority of cases you're playing one of these cards because you specifically want one effect and not the other, and your opponent knows this as well.

So should you play News Team? To answer that, you need to understand what it actually does realistically, and then decide if that's actually advancing your deck's strategy or not. The runner's choices are:

News Team really shines when the runner does NOT control the board, but is nonetheless racing you for agendas (with burst multi-access, for example, like The Maker's Eye). If you've got a reliable fast-advance strategy that can't really afford a strong central server defense, News Team might be exactly what you're looking for. But if you're looking for a new devilish way to tag the runner for your Scorch package or to tax them with SYNC, look elsewhere. If you can spare the and influence, Snare is almost always better.

This is hands down my favorite ambush in Netrunner. It is either good (-1 agenda point) or it's great (2 tags) and it costs you no money. In addition to always being good it works from anywhere.

That having been said, this card is a great example of the developer's skill at balancing and integrating with other cards.

This card seems overpowered until you realize that it can be fed to Data Dealer for an absurd profit. In addition if you have the ability to go tag me the power of this card is reduced. so if you aren't packing significant tag punishment as the corp, news team becomes much worse.

Also it synergizes well with SYNC: Everything, Everywhere and also Quantum Predictive Model.

All in all it's a great ambush that like #snare will only win you a game outright if the runner makes a mistake but slows the game down to help you leverage your game plan.

This is for a Jinteki PE point of view:

Now that we have the 20.06 Banlist and they took out Breached Dome and Shock! has rotated, there are fewer options to spice the archives.

One of them is Cyberdex Virus Suite that it's kind of useful because Aumakua is a card that its widely played. But not all decks use virus to work

So maybe it's the time to this card to shine again and use it in combination with Kakurenbo to toss it to the archives.

As other reviews said, when the runner has the option to choose their punishement it's not optimal. But 2 tags are cool and a -1 agenda point it's also cool. Specially when you have Philotic Entanglement.

So maybe this card will have more use in these days.

This is the new Archive protection. With News Team, the runner is always at risk of getting tags. Which can be prohibitive with ID like SYNC. Of course, there are tech for that, No One Home, Misdirection and Citadel Sanctuary. But News Team is a threat anywhere on the board, in any central or remote. And if the runner does not want to go for that remote where you placed it, trash it and let it protect Archive. This pair well with any tag punishment. Even if

Even if the runner take the -1 agenda point, it will make the runner need 8 agenda points to win. That can save you a lot of trouble. And if the corp is running Game Changer, Stock Buy-Back or Fast Break, it mean more agendas in the score area, which is a huge advantage. In NBN and Weyland, this card shine. It is a very cheap way to get an advantage.