trash: Prevent all damage. Trash all installed hardware, all installed non-virtual resources, and all cards in your grip. Lose all credits in your credit pool. Remove all tags. 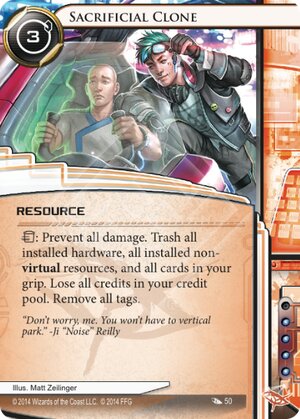 This card is perfect. Not because it is an interesting flatline counter that is cheap in the early game, but more expensive later. No.

This card is one of the most philosophically challenging pieces of science fiction published in the last decade. Think about it. Noise has created and discarded a sentient being that is physically and cognitively indistinguishable from himself. This society not only teaches people to use others as disposable tools, but also to apply that philosophy to themselves. This card teaches us that the clone has plans and dreams much like the runners we know and love: when it dies, you trash your hand of possibilities for its future.

On the other hand, perhaps the self is merely the continuation of a pattern of thought and behavior, which, though distorted by physical death, can persist in the memory of others?

(Order and Chaos era)
ende23r 44
@Wookiee "If you're broke with no cards, no programs and only virtual resources, you're not coming back from a corp that was able to Scorch you to death." This card does not trash programs. Maybe you mean that the runner will lose some programs when this blows up hardware based MU, but that's not remotely the same as "no programs". — striatic 4 Feb 2015
@ende23r is correct, the flavor on this card is fantastic. In particular, I like how it makes you realize that for all their lip service to righteousness and fairness, most Anarchs are willing to throw anyone under the bus to achieve their goals. But, in terms of mechanics...I think this card doesn't really have a purpose. Sure, it's a one-use flatline prevention...but at a huge, HUGE cost. Losing all your hardware is irritating, primarily because it costs you your consoles and other MU cards, which will force you to choose which programs you want to keep. But you could build a deck around this, especially in Quetzal, by putting in fewer programs and not worrying about memory. Losing your non-virtual resources is bad. Goodbye Kati. Goodbye Professional Contacts. Goodbye Aesop. Goodbye May. Basically, any resource-based economy gets wrecked. So to work around this, you're going to have to run an event economy, with Lucky Find and Day Job and the like. But then you lose all the cards in your grip. So even if you did have a Day Job lined up and ready to go, it goes in the garbage. And besides, if you're out of cards against a kill deck, you're going to have to draw next turn or you'll just get murdered anyway. The really damning part, though, is that you are left with no money. No money, and no way to make more money. Your next turn after using the clone has to be some combination of clicking for cards and clicking for credits, and probably your next turn after that as well. This gives the corp a nice long time to leisurely gather money and score a juicy 5/3 or a couple Astros. And to top it all off...it doesn't really even protect you against a Scorched Earth. Scorch requires that the runner is tagged, so if you aren't tagged then you don't have to worry. But if you are tagged, then the corp can spend 2 and kill your clone, and then drop the Scorch on their next click. So to recap, this card can't save you against Scorched Earth, and if you use it then you basically have lost the game anyway. Don't play this card. It's 4 influence, which means you probably wouldn't outside of Anarch anyway, but if you want to save yourself against flatline decks just run Plascrete Carapace and/or Deus X, which are 0 and 1 influence respectively, and have all the benefits with none of the drawbacks. — tiedyedvortex 1 Feb 2015
@tiedyedvortex: It does let you keep virtual resources. Which are pretty weak right now. However, it's a resource. So if you're tagged, it's basically just adding 2 and a click to the cost of Scorched, or blocking a triple Scorch. Because the corp is just going to trash it, then Scorch. It does prevent an SEA+Double Scorch, I suppose. It's an awesome card in intent and flavor, but I wish it were more useful. As it stands, while you don't lose the game right away, you're going to lose in 95% of the cases. If Plascrete said "Roll a 20 side die. On a 20, you don't die from meat damage" I don't think it would see the same play. If you're broke with no cards, no programs and only virtual resources, you're not coming back from a corp that was able to Scorch you to death. Especially given that this is a visible, face up card. Were it playable from your hand, it might have a value in the "get the corp to commit a lot of resources" sense - they go all in on a Power Shutdown + Scorch combo, you throw this out and they have 0 cards in R&D. But if it's telegraphed you have it, there's just not enough situations where it works in a world that has Plascrete, IHW and Deus X. And I always knew Noise wasn't the great guy he claimed to be! — Wookiee 2 Feb 2015
You can use the ability after you get tagged before the Corp has an action window to trash it. — A1win 30 Oct 2015
Never mind that. You can only use it while an effect that does damage is resolving, because it's a "prevent" effect. — A1win 30 Oct 2015
Sir, for this review, you have my highest respect. Thank you for being an awesome person who actually gives a damn about how great the flavor in this game is. Just... Thank you. — H0tl1ne 22 Feb 2016
I hate flavor reviews. — NoSoup4you 31 Oct 2017
3

"So, hear me out on this - what if, in this age of aggressive disappearances, Noise wasn't in fact the latest to go? What if, before all these missiles went through windows, and wigs got thrown into bins, Noise got taken out by his own clone? What if he knew his cruel fate to be used as a corpsoidal decoy. What if he saw it coming and said 'screw that'! What if this clone outsmarted and subdued the original, Dexter style. What if he tranq'd the punk, glued his hands to the wheel and sent him flying into the nearest wall? And what if, after a few years of keeping up appearances, that 'Noise' just had enough. The real Noise would never retire, but his clone, not wanting to be a slave to the original's lifestyle, has decided to do his own thing, and THAT'S why he's disappeared. I dunno man, it makes you think..."

"Would you just trash the damn card, already?"

(Game talk: It's a fun reset card. Probably not the best, but the idea of setting up some Data Foldings a Shadow Netand saying 'you'll never take him alive, suckers!', before clicking back a Levy AR Lab Access is still incredibly fun)

So it seems everyone is forgetting that scorched earth isn't the only way to flatline runners. It may not be ideal, but you can run into any number of advanced traps that are meant to damage and kill you, and have that NOT happen. Not getting flatlined seems better. It's not instantly tutorable like deus x is, but that is a shaper card, and not every anarch deck has the influence and it doesn't help against brain damage anyway. But they'd certainly like it if they want to see what that 6 advanced card is in weyland, or that mushin no shin just put out. The damage doesn't even have to kill you, you could just run into a cerebral overwriter, and not have to be stupid for the rest of the game. This isn't necessarily an anti scorch card, though if you're clever, you can manupulate that situation if you're playing resource denial.

This card costs the same as plascrete carapace, but it's a resource, and thus can be trashed before the scorch happens. But what if you played it with a fall guy? Then they have to trash it twice. Then if you have less than 4 cards in your hand, they can kill you. So when did you start playing netrunner exactly that you think having less than that number of cards against flatline is healthy? Adding 2 credits and a click, or 4 credits and 2 clicks on the scorched earth price tag? for only 4 meat damage?

Be warned, Freelancer is a hard counter. (Tries to roll eyes hard enough to blind himself permanently)

(Order and Chaos era)
cmcadvanced 25
Hmm this one this i feel this card really could of used is Remove all brain damage, then there is synergy with some of the brain damage stuff Anarch have. — Talism 30 May 2015
When Apex releases, this card might see use, especially if his "install face-down" mechanic lets him surprise the corp with hidden resources (which seems likely). — FarCryFromHuman 19 Jun 2015
Wow never mind those are the two most anti-synergistic cards ever. My bad. — FarCryFromHuman 19 Jun 2015
2

Sacrificial Clone has use, although a niche one. Anarchs that seek to win on a single 'glory run' will like him as an in-faction method of damage prevention against traps. There's a few builds that basically pump up Incubator and other virus stuff, throw it all on Medium, and then dig your entire deck at once. This is obviously a risky move against Jinteki and anyone else who happens to be running traps. Sacrificial Clone is an in-faction way of surviving your last turn- as long as you can make sure it is your last turn.

One more thing I'd like to highlight, as the most of it was already told by everybody that came before me - it is a very viable counter to everybody playing Midseason Replacements as it removes up to helluva lot tags, which is, coincidentally, exactly how many tags you are going to get versus your average Corpie tagstormer. It can absolutely ruin their day, which is what every runner ever should feel obliged to do, to bury the very idea of playing and winning with cheap tricks. There, I said it. You cheapskates, you.

EDIT: I have just realized that this ability can only be launched in response to damage, not to mitigate a hoard of tags all by itself. So unless you have a way to provoke damage you can prevent, you still get PsychoBeale'd. The only thing coming to mind now is Tri-maf Contact, but how do you trash it on demand? Or, perhaps, use a Street Peddler to quickly drop Titanium Ribs or Net-Ready Eyes? This seems like not much of a price to ruin somebody's game - especially if that person is a tagstormie!

In case you guys wondered: ancur.wikia.com

(Kala Ghoda era)
H0tl1ne 374
Is it clear that an ability that leads *“prevent X”* can *only* be used in response to *X*? I’d have thought that you can pay the cost whenever you like, and if you're not currently about to receive any damage, you still get the benefit of the rest of the ability. — michaeln 25 Feb 2016
I'm afraid yes. See here: http://ancur.wikia.com/wiki/Prevent_and_Avoid_Ability_Timing_Ruling — H0tl1ne 25 Feb 2016