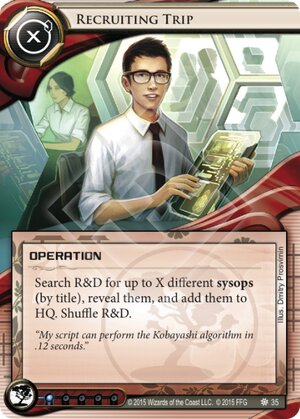 Search R&D for up to X different sysops (by title), reveal them, and add them to HQ. Shuffle R&D.

"My script can perform the Kobayashi algorithm in .12 seconds."
Illustrated by Dmitry Prosvirnin
Decklists with this card

Well, before we get too far ahead of ourselves, here are all the sysops. They're a janky bunch and four out of the eight (as of The Underway) are in Jinteki.

Recruiting Trip is not an unplayable card. Marcus Batty in particular is a great target. The primary value of RT is that it's an operation and—Imp and Edward Kim aside—that makes it untrashable. Batty has a 1 cost so if he's crucial to your game plan, RT allows you to find him sooner without making RnD porous. Furthermore, RT is only a single influence so it's an appealing choice for decks that splash sysops. In particular, I see a place for it in Haas-Bioroid lists that want the Batty-NEXT Gold combo but can't spare enough influence to run more than 1 or 2 copies of the crazy-haired psychic.

Outside of Batty, there are a few niche uses for the card right now. The Foundry might want to conjure up The Twins for a combotastic double Janus kill. Personal Evolution may want to grab Tori Hanzō. All of these are surprise flatline combos though and revealing the sysop before install reduces their viability. I can't think of many scenarios where you'd want to tutor for multiple sysops but since they're all upgrades you could search for two and install both in the same server.

Overall, I like this card a lot. It's low influence and its playability depends on deck construction and the available card pool. Unlike unqualified tutors that are universally useful, cards like Recruiting Trip encourage inventive and narrow combinations. It definitely doesn't slot into many decks but someone in your meta will find a weird use for it, rest assured.

(The Underway era)
phette23 2261
Defective Brainchips is a 1 influence card, and there is no better combo for dealing a Brain Damage than Marcus Batty and Tori Hanzo. I think its the real deal for that kind of deck who needs the Sysop NOW. — hi_impact 28 Jul 2015
Check out the art for this vs. the art for Career Fair. They even made the visuals on the PAD the student is holding the same! — LordRandomness 8 Jun 2016