Cards cannot leave the Runner's heap for any reason. 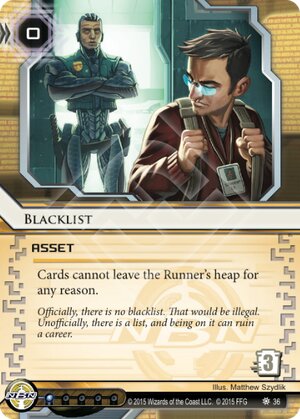 Rezzable for 0, trashable for 3 - good ratio, and sets back a good amount anybody using Same Old Things, Clone Chips or Déjà Vu. Which basically means... anyone. No more Account Siphon every turn, no more insta-Parasites and Shapers can forget about their programs you have trashed earlier. Levy AR Lab Access does nothing at all (except drawing the Runner five cards, but that's not what this card's role is). Exile and MaxX can already concede once this hits the table - that is, if the server is secure enough, or maybe not secure, but you catch them off-guard and without resources to spare.

One influence a piece. Worth adding to any deck to spice things up a bit given you have one influence to spare. Be careful not to shoot yourself in the foot if you find yourself running Chronos Project.

After testing this card in a few different decks, I have come to the conclusion: don't be fooled by the yellow border, this is a Jinteki card.

Blacklist is one of those cards which is "fine" for value. It's 0 to rez and 3 to trash, giving you a small advantage even if it does nothing but force the runner to run it. The main value interactions are against Shaper recursion cards like Simulchip and Harmony AR Therapy, which are normally economically important to the decks that run them (sometimes even vital to their operation), but are blanked by Blacklist (thus forcing a run on Blacklist to trash it). Blacklist also gives nice value against heap breakers like Black Orchestra; they have to be installed manually, costing an additional click and a card (heap breakers are often discarded to hand size after accidental overdraw or to pay a cost, but if you can't use them after discard you'll have to use some other card instead).

All this value is very nice, but it isn't really worth a deck slot on its own; if you wanted a card that forced the runner to run it or else let you accumulate a slow drip of value, you might as well just use a drip economy card like PAD Campaign, or indeed any other economy asset with a fairly high trash cost. Rather, Blacklist is at its best when it's part of a combo. So what combos are available?

There's an obvious natural synergy between these combos: Blacklist is thus at its best in a deck which does a large amount of damage in small quantities over the course of the game, without aiming for a flatline combo (or with Blacklist itself as one of the main flatline combos), and which contains at least some sentries/code gates with a large facecheck penalty (I like Saisentan and Anansi for this). That sounds like net damage to me, and in particular it sounds like a common core strategy for Jinteki decks. (You could perhaps run it out of Weyland Consortium: Builder of Nations too, but I haven't tested this.)

I think Blacklist is best as a 2-of in this sort of deck, giving you a high chance of drawing it by the time you need it. Going to 3 is probably too much: sometimes, the runner will have no targets for it (this happens with some Criminal decks), so you don't want to be flooded with Blacklist copies. (That said, it still has some use in these circumstances: you can follow the normal procedure for otherwise useless assets, of dropping it unrezzed into your scoring remote in the hope of baiting the runner into running it, something that works surprisingly often.) However, against Anarchs who use heap breakers, or Shapers who rely heavily on recursion, it has a decent chance of winning the game by itself, often games you couldn't have won without it. Given that that describes a large proportion of the runner metagame at the moment, Blacklist is definitely worth the deck slots when you play it for the combo. At only 1 influence, it shouldn't be hard to pay the deckbuilding costs, either.

Really great review. I like that you both give strong suggestions as to where Blacklist is strongest and offer some analysis of the present meta to make your case.