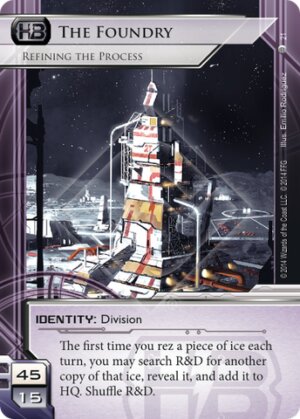 The Foundry: Refining the Process

The first time you rez a piece of ice each turn, you may search R&D for another copy of that ice, reveal it, and add it to HQ. Shuffle R&D.

It's worth noting that this card has a peculiar interaction with Accelerated Beta Test, as per the FAQ of the Rules Clarifications. The ruling reads,

"If the Corp uses the ability on The Foundry during the resolution of an Accelerated Beta Test, what happens?

Each piece of ice is installed and rezzed one at a time. So the Corp installs the first piece of ice and then uses The Foundry to search R&D for another copy. This results in shuffling the other two looked at cards into R&D (they never actually leave R&D), preventing them from being installed or trashed."

This ruling, however, isn't entirely a set back. If anything, it removes most of the risk from firing Accelerated Beta Test. For example, imagine you see 1 ice, 2 agendas from ABT. Instead of being forced to trash those agendas (and possibly waste 2 Jackson slots), you can install the ice, fire off the Foundry, and the 2 agendas go back into R&D.

When you have a mix from ABT (like 2 ice, 1 agenda), the Foundry gives you options. It allows you to weigh the value of the agenda (or asset, operation, so on) versus playing both ice or only 1.

I think this interaction alone makes The Foundry interesting and more compelling, especially considering how often ABT is run in HB decks.

Let's update these reviews for modern times! The Foundry is an identity whose ability opens up all sorts of possibilities. A great many of them have been discussed below, but let's start by looking at some more combos the Lost and Foundry can do for us in this day and age, from the reasonable to the awful, awful jank.

The first and foremost card that should be mentioned that I haven't seen below is The Twins, which at one influence to splash and an ability that perfectly synergizes should be a card carefully considered. Rez one Janus 1.0? How about two Januses, eight brain damage, and death to all Runners? On the note of brain damage, what about Brainstorm? Using Oversight AI or Bioroid Efficiency Research to rez these threats ahead of time can buy you valuable time to score out delicious agendae while they dig for killers.

Secondly, something that's started entering the meta following the Flashpoint cycle is the concept of trashable ICE -- though the name is somewhat misleading. A better nomenclature would probably be "on-encounter" or "trap" ICE (not to be confused with actual trap ICE). On-encounter ICE was prototyped with Archangel, introducing the idea of ICE (and therefore subroutines) that could fire from RnD, acting as a trap like Shock or Snare. Not including Archangel, which can't be trashed, on-encounter ICE consists of:

With the Foundry's effect, it's possible to tutor these pieces of ICE (and therefore traps) into your hand, making HQ more dangerous to access, as well as prompting the runner to spend valuable to trash them. Of course, this necessitates installing them first and getting them rezzed, but the ability to make HQ more hazardous for essentially free is always a bonus. However, you will notice that none of these pieces of ICE are native to HB, which makes the 6 influence cost of importing a 3-off a hesitant decision. Perhaps we'll get an equivalent HB ICE one day.

Finally, I've run out of things to say about the Foundry. It shuffles RnD and makes RnD lock unhappy, I guess.

(Free Mars era)
Agenarchi 95
'on-encounter' sounds like Tollbooth. Maybe 'on access' is a better name... *sigh* If only FFG would have given all of them the 'Ambush' subtype. It was so fitting that Archangel had it. — Krams 8 Aug 2017