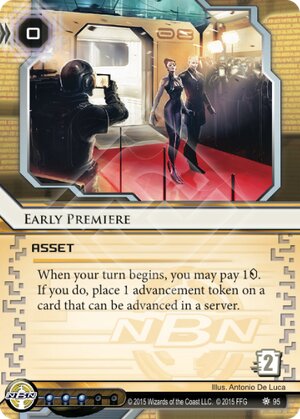 When your turn begins, you may pay 1credit. If you do, place 1 advancement counter on 1 card you can advance in the root of a server.

Illustrated by Antonio De Luca
Decklists with this card

If you're using NBN splashes to power your advanceable ice deck (or Weyland splashes to run advanceable ice out of NBN), this card competes nicely with Matrix Analyzer. If it cost a little less influence, I'd say it replaced it entirely, but it's still competitive as-is because the trigger isn't condition upon the runner hitting any particular server.

Best of all, if you do manage to get a couple of these down with face-down agenda in play, you've set yourself up for an excellent power turn. Pair with Architect or Team Sponsorship for additional fun!

EDIT: As noted in comments, you can't actually use this card to advance ice, since they aren't "in a server". That's worth repeating because it's easy to confuse! This card's synergy in decks that use advanceable ice is based entirely on the understanding that they are likely to contain advancement token manipulation (Shipment from Kaguya, Trick of Light, etc.), and this can help put more tokens on the table quickly.

(Data and Destiny era)
KitsuAeryn 293
Don't think you use Early Premiere to advance ICE. It says that you can pay one credit to advance a card IN a server and ICE is considered to be "protecting" the server, not "in" it. — forktines 13 Jan 2016
That's a good distinction to point out! Truth be told, the power of this card isn't in the ability to quickly advance ice (which, as you've mentioned, it cannot do), but rather to quickly turn a facedown, unadvanced card into a card with 3 advancement tokens on it at the start of your turn without spending a click. — KitsuAeryn 13 Jan 2016
2

While on its face this card may not appear to be the best (2 to trash is not exactly going to stand up to many runners) I actually think it has a place outside of NBN. My reasoning is as such: within NBN, a runner is simply more likely to face check a card than in Jinteki or Weyland. Snare!, Forced Connection, and others are all nasty surprises for an over aggressive runner. As such, I think Early Premiere has a chance to shine in Jinteki or Weyland decks that want to score out bigger support agendas (The Cleaners, Bacterial Programming, or the now banned SSL Endorsement). In addition, Jinteki and Weyland both have plentiful non-agenda targets for an extra advancement counter. Project Junebug and GRNDL Refinery are both great targets for an extra advancement counter here and there. Last but not least, this asset plays quite well with Tennin Institute: The Secrets Within, as it can allow for some aggressive agenda counter placement should the runner fail to make a run. As with many cards in Netrunner, Early Premiere should not be in every deck. But, it provides enough functionality to support the strategy of several different potential decks.

Why go to an Early Premiere when you can get Jeeves to do so for you?

Seriously; everything one of these could do, Jeeves can do better... way better.

This does at least have the edge case benefit of stacking up to 3 times, to allow you to score a Global Food or a Vanity Project from unadvanced, though with the number of ways to score a Global Food from hand with Jeeves, I'm not sure why you would want to, unless there ends up being a card that allows you to install an agenda at the start of your turn that doesn't cost you an arm and a leg for influence.

(Fear the Masses era)
Quarg 253
Pretty sure this doens't work - Early Premiere is an 'at start of turn' ability that doesn't cost a click - so you can only do it once, and it doesn't interact with Jeeves at all. — ninjaiguana 7 Jul 2016
I am pointing out that what Early Premiere does (that is, advancing an installed card an extra time) Jeeves does better, not that they interact together. — Quarg 8 Jul 2016
Ah, I see - my apologies — ninjaiguana 12 Jul 2016
Jeeves is unique, whereas if you have multiple Premiers down, you could theoretically never-advance agendas up to the level of Vanity Project/Mandatory Upgrades. Max jank: add 3x Biotic Labor (or 2x plus 1x Jeeves) for Government Takeover. — beladee 1 Nov 2016