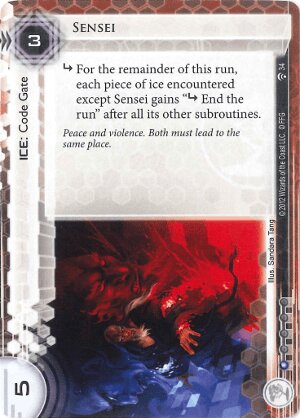 subroutine For the remainder of this run, each piece of ice encountered except Sensei gains "subroutine End the run" after all its other subroutines.

Peace and violence. Both must lead to the same place.
Illustrated by Sandara Tang
Decklists with this card

Ok, I'm going to be devil's advocate and try to make a case for this seldom-used teacher. I've always loved the art here, and I think it may actually have a place in decks with a variety of porous ICE, or even where a little extra tax is desired. So many ICE lack ETR subs, and what I find particularly appealing about this guy is that he doesn't just give an ETR to the next piece of ICE, but "each" piece of ICE behind him. He's also just beyond Net-Ready Yog range, which is pretty nice. On another note, he can make bioroids cost either an extra credit or click.

With Sensei, there are three categories that ICE fall into (excluding ICE that already has a solid ETR):

As of Data and Destiny, the following is all ICE (again, excluding those with a solid ETR) which interact with Sensei, by category:

While I don't think Sensei is at the cutting edge of competitive play, far from it, in fact, I do believe there are a number of significantly impactful niche uses for it. While it may sometimes be a simple tax, there are just as many occasions where that extra ETR can trigger some interesting or just plain mean effects (i.e. Bandwidth or Wotan).

(The Universe of Tomorrow era)
slobad31 547
It already has a hard ETR, but I can't help laughing at how horrible for Faust players this + Sub Boost could make Little Engine. — TheBytemaster 9 Oct 2015
I'd actually make the case for moving RSVP out of the synergistic case. It seems that if you are trying to use RSVP to stop a run (by scaring the runner by what you might have waiting that they cannot now spend credits on), then adding an ETR to it is actually putting it in the boosted category. On the other hand, if you would prefer they finish the run by slamming into all the stuff they can no longer spend money on, then an ETR is counter-productive (which puts it in the anti-synergistic category). I'd also move Gyri Labyrinth, Sensei, and TL;DR out of Anti-Synergistic. Gyri could go either way, but since maximum hand size only kicks in at the end of the runner's turn, you can't really use it to force a flatline during that run, meaning there's really no difference as to whether it ends the run or not (which puts it in the boosted category). Since Sensei's goal is to stop runs, putting two on a server, while not the best use of the card, is not what I would call anti-synergistic. Not only does the second sensei get an ETR (that's the goal, right?), but every piece of ICE past that gets TWO ETRs! Finally, TL;DR works exactly the same way, where the only caveat is that you want it BEFORE your sensei. — Sabin76 9 Oct 2015
I would also remove Bullfrog from the synergistic case since having his first sub fire and move removes not only the ETR for next round but also removes an ice, so the next run on the formerly protected server is easier and Sensei's impact is lowered. — Capstone 9 Oct 2015
@Sablin You make good points, and I agree that there is no cut-and-dry divisions for some ICE, such as those you point out. I completely agree with TL;DR, as well, which is pretty amazing before a Sensei. @ Capstone A fair point, and that makes sense moving Bullfrog out of that category. — slobad31 11 Oct 2015
I disagree that Howler is anti-synergetic. Howler's subroutines are optional, with it saying, You may... If you do then trash Howler... So Howler can be indefinitely left on the table. Since Howler is a trap, it requires an AI breaker to get through it. A Sensei in front of Howler would add an etr to it that could only be broken by an AI breaker. Making a server very hard to get at. Additionally, Sensei will add the etr to the Bioroid ice Howler installs. — ivanbarker 14 Oct 2015
@ivanbarker You are absolutely correct! I totally overlooked the "You may" on Howler. That's pretty awesome, actually. — slobad31 19 Oct 2015
It's not just howler. Kitsune and Universal Connectivity Fee are both also traps that don't necessarily trash on firing. — LordRandomness 27 Jan 2016
2

Waaaaay back the days of the Genesis cycle, when dinosaurs ruled the earth, Fantasy Flight Games thought adding subroutines was a powerful thing, forcing exorbitant costs upon runners to run. Probably because the card pool was so limited. Hell, criminals were using shit like Aurora and Peacock to break subs, and many a Noise player tried relentlessly to make Darwin work somehow. Hence, ice like Sensei, Woodcutter, and Salvage were designed to add subs with limitations and at high cost. Woodcutter must be rezzed first, then costs , per sub. Sensei has high install and rez costs relative to subs added.

Nowadays, runners either pay 1 per sub to break or use limited free abilities, such as Overmind counters or ID abilities like Quetzal or Adam/ABR. Or they don't give a shit how many subs your ice has. So, by today's standards, cards from the early packs that add subroutines are vastly underpowered, and I expect to see newer iterations of these cards in the next few years as these older packs get cycled out.

Adding an ETR is weak because it doesn't anything nasty to your opponent - not like an alternate win condition like "Do all the net damage" would. Either they can't get into your server for a little bit until they find the right breakers (blocked run), or they have to pay more to get into a server (taxing).

Sensei's bad at blocking runs. If you're installing ice to end the run, just use ETR ice. If you're adding subs to the next ICE, I'd sooner use Marker, as being free-to-rez offsets the install cost. Or, seeing as this example assumes no decoder, Lotus Field would serve the same purpose without requiring other cards.

Sensei's pretty weak as taxing ice. The extra usually translates to an additional spent by the runner. The most you're hoping for is +1 cost to run per ice, which you paid to install Sensei. An overhead cost of 3 to rez Sensei means you're paying more than the runner until they've run around 3 times.

Exceptions to this would be breakers that use counters, such as D4v1d or Cerberus "Lady" H1: Lady would not enjoy Sensei-Eli-Eli. Also, it's good to point out that it costs the decoder staple Gordian Blade 4 to break, so the runner is likely to just let Sensei fire.

How to Use Sensei

To make Sensei playable, combine with abilities that lower install and/or rez costs, and install him on a deep server that your opponent will run often (HQ vs. Siphon recursion, for example). Refer to @slobad31's awesome review for synergistic ice.

(Data and Destiny era)
PureFlight 1029
Definitely a good run-down of why Sensei doesn't see play, though I wish he would with that artwork haha. I think the additional subroutine ability might be better in the form of an upgrade, since, as you say, a major drawback to ICE like this is installation cost. If Sensei was, instead, a martial artist sysop, I could see his tax being more impactful. — slobad31 25 Jan 2016
1

Positional ICE is always difficult to make use of. See it too early, and it is useless without support cards to move ICE. See it late and it is nice, but did it really do its job then? Sensei is at least a piece of ICE that is not only difficult to break at five strength, but also adds subroutines to all other pieces of ICE after it. That adds the tax factor up really quickly. Given also that token breakers are becoming more popular (such as Cerberus "Lady" H1) an additional subroutine could run those kinds of breakers out faster, opening up scoring windows for the corp.

It is positional, and that is its greatest drawback for certain. It is an average of three of four credits to break though, which can be good - more so the more ICE that it is in front of. On average it probably is only going to be an additional two credits to break those subroutines it adds to the ICE behind it (assuming it averages out most often as the third ICE on a server), meaning its high tax to break will never be paid in favor of the smaller addition to further ICE.