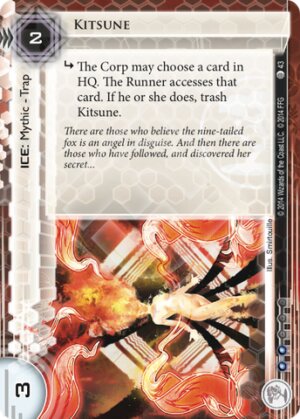 subroutine You may choose 1 card in HQ. If you do, the Runner breaches HQ. During this breach, the Runner cannot access cards in the root of HQ, and the first card they access must be the chosen card. When the breach ends, trash this ice.

I'd like to address a specific potential use of this card: Imported into Haarpsichord Studios: Entertainment Unleashed NBN. There's a number of generic NBN tricks Kitsune has access to, but Haarpsichord opens up a specific and very powerful one: If you force the Runner to access (and thus steal) a one-point Agenda, they cannot steal any other Agendas this turn (including, say, the 5/3 that Kitsune was in front of!)

Combined with the fact that NBN has Agendas like TGTBT, Quantum Predictive Model, and especially 15 Minutes, the interactions here can very quickly become hilariously irritating. Protecting a Franchise City with just Kitsune means when the Runner steals the one-pointer you threw them at you can rez and claim Franchise City, which causes the server to disappear and even denies the Runner the usual benefits of a successful run (e.g. Desperado credit). This is particularly useful against nasty run events. In Haarpsichord this means a one-for-one Agenda point trade...but the Runner is locked out of stealing for the rest of the turn.

One way to open a large scoring window in this scenario is Award Bait. Simply place Kitsune in front of a Restructured Datapool or neutral 5/3 of choice, then when the Runner attempts to access give them the Award Bait and place the two advancement counters on the protected agenda. They can no longer steal it, so you are free to score it next turn.

If you're willing to go all in on the jank, Mushin No Shin offers the possibility of EIGHT advancements on a single Agenda (three from Mushin, two from a possible Award Bait, three from next turn's advancement clicks) although this is generally overkill (six is enough to score a Vanity Project and Project Beale only provides more points at nine).

Kitsune can also support a Haarpsichord kill strategy instead, throwing the Runner at cards like News Team and imported Jinteki traps, or useless/low value Agendas in order to stall the Runner's attempts to score out. Or both if you have TGTBT. News Team is notable because if stacked with a simple Data Raven it threatens with either three tags or -1 Agenda point, both of which represent significant slowdown (or a tag float!)

The strategy's weaknesses include AI breakers (all traps are weak to these), Imp and other trash enablers (it's easier to trash the card you send the Runner at, and in Haarpsichord they can still trash further accessed Agendas even if they can't steal them), Film Critic (Haarpsichord in general falls over to this), and probably some other things I haven't come across yet. Imp can at least be mitigated by including Cyberdex Virus Suite, which interacts well with things already discussed, but of course a well-built deck will use Kitsune as one of many tools to frustrate and defeat the Runner.

In summary, the interaction with Haarpsichord combined with NBN's reasonable pool of irritating to access one point agendas makes Kitsune worth considering in a Haarpsichord deck already built to utilize those, either to stall for a kill or to force through larger agendas and/or Franchise City, simply due to the sheer volume of favourable interactions with already effective NBN cards. Further synergies are left as an exercise for the reader.

(Data and Destiny era)
LordRandomness 235
I've been testing a Haarp deck recently, and I find this potential to be very interesting. It is actually fairly easy to win with Haarp by scoring if you can just keep pushing the runner into traps and 1-point agendas while scoring out 2's. — bubbathegoat 7 Jan 2016
This is actually a very good point. I talked a lot about the best cases, but Haarp can be very effective at grinding out a win from a small point advantage so throwing the runner at 1's and scoring out 2's is a perfectly legitimate path to victory. — LordRandomness 7 Jan 2016
5

This trap is actually a perfect fit for an IG kill deck. Showing it to your opponent with Celebrity Gift and/or Snare (not that you need to show snare, they know you have it;) and dropping an ICE on archives makes life difficult for them. They need to clear archives to trash your assets but taking a snare then continuing the run could mean death. This is the type of mind games Jinteki loves. I run two in my IG deck and so far it has more than paid its way in fear factor alone. While the 6 cost can be prohibitive, its easy to get a strong economy with IG.

So what are traps that fire while in HQ that make this card worth it? First of course is Snare! for a total cost of 6, two cards, and a click(to place Kitsune) +whatever ice install cost, you deal 3 net damage and 1 tag. There's also Cyberdex Virus Suite, Fetal AI for 2 net damage, Shi.Kyū, Shock!, Space Camp, TGTBT. I think it's clear that Snare is the best but it's just so expensive and hard to set up that I find it hard to justify this ICE in any deck.

(The Source era)
Finnbarre 72
I won the most epic game with this card. Late game, shaper runner with complete rig to use powerful stealth icebreakers. I wasn't able to install an agenda because it would be stolen. Turn after turn, I collected credits and my opponent was running R&D (I used celebrity gift to show him 3 ambushes in HQ, and he knew I had 3 shocks in archives). At last last I was able to install Kitsune (3rd ICE) and Pup-pup (4rd ICE - 'cause runner's special ability to make the first ICE code gate - he would be able to break a trap). He made another run for R&D, paid for pup-pup and... BAM! Kitsune + Snare! Flatlined! I had only 3 cards left in my R&D :) — szuszucp 14 Feb 2015
Someone would run against jinteki with 2 or less cards in their hand? Hm... — Apex Predator 1 Jul 2018