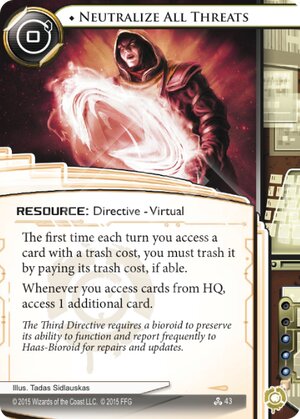 The first time each turn you access a card with a trash cost, reveal it. You must trash that card by paying its trash cost, if able.

The Third Directive requires a bioroid to preserve its ability to function and report frequently to Haas-Bioroid for repairs and updates.
Illustrated by Tadas Sidlauskas
Decklists with this card

Obviously, this card is very important for Adam: Compulsive Hacker, lending him a great deal of early HQ aggression and in faction, turn one multi access. But there is something that really bugs me about it's design: influence cost.

There already exists an HQ multi access card: HQ Interface. It only costs two influence and has no drawbacks. Now, a runner might be inclined to use NAT and deal with the drawbacks of the card if the influence were lower than HQI. But that's not the case. I can't think of any reason why a objectively less powerful card in any other faction would cost more influence to import except for flavor. I'm assuming that was the design choice here: having Bioroid technology and programming in your human brain isn't something you can just peddle off the streets. You need some connections for that, so it costs more influence. Also, it makes it consistent with the influence cost of the other two directives. So unfortunately, what could have been an interesting choice to make in deckbuilding becomes a card you only want in one place. Ever.

Clearly, these mini faction cards are best suited to the Runner's they belong to, but there are a handful of new Runner cards that are great additions to other factions. Unfortunately, Neutralize All Threats is one of those situations where the flavor and the mechanics of a card clash.

(Data and Destiny era)
WayneMcPain 417
I would assume part of the balancing for this card is the zero install cost making it a cheaper alternative to the likes of HQ interface. Though I agree that the influence in order to include it in out of faction decks is rather high. — PeterCapObvious 6 Nov 2015
HQI costs 4, while NAT costs 0 to install. HQI will also not survive rotation, and NAT will. — BaronZilar 6 Nov 2015
The real advantage of Neutralize All Threats is that Adam has it installed before the game even starts. — notrocketscience 6 Nov 2015
I feel making an argument for this card's influence is pointless due to what you mention - flavor. It should have been 4 or 5 if you ask me, if only to make it more exclusive to Adam. Same with Heartbeat and Security Nexus. Having a few 4-5 influence cards for each D&D runner would have enhanced thier unique presence. — LynxMegaCorp 6 Nov 2015
I suppose I didn't think about the install cost. But, NAT is also Unique so you can't stack the effects. I think the point that the influence is rather high still stands. Thanks for the comments. — WayneMcPain 7 Nov 2015
There is one other thing about NAT that needs to be considered... it works with HQI. If you have out this and HQI, you get to see all 5 cards. — Goldstep 7 Nov 2015
I'd just like to point out that this card is absolutely tits when used with Whizzard - as forced trashing does him about nothing. — H0tl1ne 1 Jan 2016
Yeah, and the install cost difference is huge for Whizzard. He can plonk this down turn 1 and suddenly have a credible threat against HQ for little to no cost. — LordRandomness 14 Apr 2016
1

It apparently hasn't been said yet, but this card is absolutely brutal when paired with Gang Sign. Each time the Corp scores an agenda, you get a two card access from HQ, and that's only with ONE Gang Sign. Multiple signs will trigger in succession, each time granting you two accesses with NAT. The 'cost' of trashing the first trashable card you access each turn is negligible, since you're probably playing Criminal or Anarch and subsequently rolling in dough or scrubbing / imping the Corp anyway, respectively. And you really should be trashing any and all corp cards you can in the first place, if for no other reason than to reduce the odds you'll access the same card(s) again.

Also, it costs 0 and, as WayneMcPain points out, is only three influence. I fully expect to see NAT in a Leela Gang Sign deck.

(Data and Destiny era)
Drugs 22
But if you're playing gang sign leela you can do the same thing with hq interface without spending influence. — carse 14 Dec 2015
Or you could do both and get a 5-card HQ access with only one gang sign. — TheBytemaster 14 Dec 2015