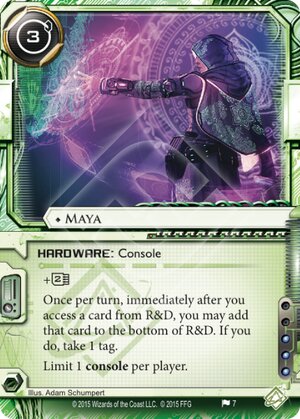 Once per turn, immediately after you access a card from R&D, you may add that card to the bottom of R&D. If you do, take 1 tag.

If you're running this, you're probably a Shaper who just needs a quick, cheap 2 MU. And honestly, that's fine. 3 credits for 2 MU is pretty good.

But Maya lets you do some weird stuff. The ability to bounce a card to the bottom of R&D effectively lets you get a fresh access if you're one to run R&D twice a turn, and with R&D Interface, you get to sift through the Corp's deck Daily Business Show style...but giving them all the crap they don't want (and then immediately regret it when you see the second card). Send their combo pieces or economy safe and sound to the bottom of their deck, until they pop Jackson at least.

Then clear that tag, because you're a squishy Shaper. Of course, if you're playing Jesminder Sareen: Girl Behind the Curtain, then that's not a problem at all.

Just remember that you're still accessing cards, which means you still get hit from Snare!. But remember, you're still accessing cards, and you bounce them to the bottom AFTER access. This means you can access a Quantum Predictive Model with a tag and bounce it OUT OF THE CORP's SCORE AREA. Bounce 15 Minutes out of your own score area. Feeling spiteful after losing a Future Perfect psi game? Bury it. Take the -1 AP from News Team, and then shoot it to the bottom of R&D! Then cackle maniacally.

In short, I think it's the most fun you can have with a Shaper console and not a bad deal on MU to boot. Give it a shot, and don't run last click.