Once per turn, when you encounter a piece of ice, you may have it gain 1 subtype of your choice that is not sentry, code gate, or barrier for the remainder of this run.

"The basics should be like the stories you learned as a child—unconscious, never forgotten, and suddenly relevant at the most random times." -g00ru
Shaper • Hannah Christenson • Kala Ghoda 8
All sets:
Links: Decklists | ANCUR 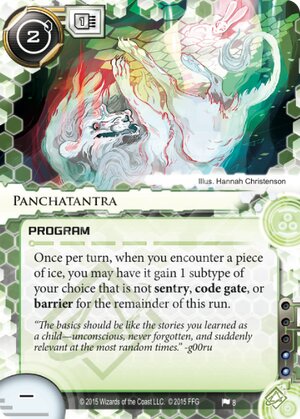 Another card to add to the Shaper I-can't-pronounce-this-card page in your binder alongside Paricia and Sahasrara. Although maybe you want to add it to the confusing-as-heck part of the Shaper arsenal, alongside Analog Dreamers and False Echo. But today I'll make a case that actually you should take it out of the binder completely and instead run it in YOUR deck. But first, don't make the mistake of a rookie friend of mine: just because the ice has the subtype "Bioroid" now, doesn't mean you can spend a click to break a subroutine, nor will newly annointed "Traps" trash themselves upon firing. Also, subtypes are different from types, which means that you can't turn ice into assets and trash them with Imp or any nonsense like that. Some of you might even be thinking of Unregistered S&W '35, but ice are not installed in servers so your dreams of shooting Eli in the face will have to wait for another day. In reality, there's 3 subtypes that are worth naming: AP, Destroyer, and Tracer.

That's because as of this card's release, the only cards that gain benefits from ice with a subtype that is not Sentry, Code Gate or Barrier are Deus X, Sharpshooter and Gingerbread, although I'm sure they'll be joined by at least a couple more cards in future. While it's nice to see Gingerbread find a purpose in life, it's the disposable breakers that are really exciting.

Between Deus X and Sharpshooter, most large ice can be broken once for around 3 credits, which is something that Shapers haven't really been able to do before without importing it for a large pile of influence. I'd compare these cards to D4v1d, Inside Job, Femme Fatale and Faerie. They all deal with a single piece of high strength ice exceptionally well, but only a few times before a different solution must be found. However, Shaper is the faction with the most tutoring so can consistently find Panchatantra and Deus X/Sharpshooter when they need it, as well as the kind of recursion that allows them to do it again if necessary. Test Run works wonders for this kind of rig.

Unfortunately, this is a two-card combo, and one where one of the cards is completely useless without the other. That doesn't mean it won't see competitive play: for every The Twins + Komainu there's a Adjusted Chronotype + Wyldside. But there's a subtler reason why Panchatantra is less valuable than D4v1d or Faerie: Shaper just doesn't have enough high-impact run events in faction, and by that, I mean your Account Siphon and Knifed/Spooned/Forked. If Shaper wants to get into a server then they'll probably want to get in again in the next turn, and that'll use up your recursion pretty quickly if you're going through with Deus X and Sharpshooter.

That means Panchatantra will probably find itself in decks that splash high-impact events, like Account Siphon and Vamp. You know back in the day there was a Chaos Theory deck that used to do that kind of thing. If only someone could bring that archetype into the modern era...

Then maybe The Panchatantra could be the second most popular card about a book about animal fables.

(Kala Ghoda era)
RubbishyUsername 434
It's worth noting that there's another I-can't-pronounce-this-card later in the cycle, the icebreaker Sadyojata (Democracy and Dogma 44) that needs ice to have at least 3 subtypes. Also, there's possible shenanigans with making Wraparound a Fracter or Enforcer 1.0 a Console, should you not have one installed. I'll let those go to the FAQ — MattOhNo 31 Jan 2016
OMG, Executive Theta, those last two ideas are just mind-blowing o.O — Krams 1 Feb 2016
Your points about Pancha X/PanchaShooter make me want to combo them with Crescentus. Which then makes me want to put this into a Geist deck. Oh, and look! In-faction Syphon and Gingerbread! Huh, weird. — PureFlight 5 Feb 2016
Brilliant ideas Executive Theta! — Zakalwe 17 Mar 2016
3

This card has obvious synergy with three other runner cards: Gingerbread, Sharpshooter, and Deus X.

---Sharpshooter and Dues X allows you to break any large ice at a discount, provided you have a Panchatantra already installed. This has synergy with Kabonesa Wu: Netspace Thrillseeker, as she can tutor Panchatantras out normally and use her ID ability to tutor out Deus X and Sharpshooter cheaply and repeatedly to break ice cheaply on 1-2 iced servers in the early game, similar to some types of Criminal faction decks.

---Gingerbread synergy can create its very own archetype, however, and its usage is very interesting to me. Gingerbread is not an AI, meaning that all of the shaper's icebreaker mod hardware can affect it and can still be used as your main breaker. A base strength of 2, combined with Dinosaurus, The Personal Touch, and Net-Ready Eyes becomes a base strength of 6. Add Takobi and another Personal Touch, and you will never have to worry about boosting for strength again. Alternatively, you can use Dedicated Processor and Gebrselassie to pay 2 once per turn, (or maybe twice). The flaws with this archetype is that it can only break into 3-deep servers, and any additional ice has to be broken with a backup breaker, (Crypsis/D4v1d), or a conditional backup breaker, (Dues X/Sharpshooter), both requiring additional memory, and which causes it to fall apart to the Vertical Jinja City Grid archetype. In addition, all available hardware tutors are either very expensive or high influence, making this deck slow, inconsistent, and late game preferable.

(Reign and Reverie era)
Apex Predator 26
I've proven you wrong, RubbishyUsername! — Apex Predator 9 Aug 2018
Can you explain how you get into 3-deep servers? I feel like I'm missing something.. — BlackCherries 9 Aug 2018
I think it is because Panchatantra only works on one ICE per turn, and you can only have 3x Panchatantra installed, so if they have 4 pieces of ICE stacked, you can't convert them all into tracers for Gingerbread to break. — bashwell 9 Aug 2018
Ah didn't realize it wasn't unique. Cool. — BlackCherries 9 Aug 2018
1

This card has clear synergy with Gingerbread, Deus X, Sharpshooter, and a spoiled card from later on in the Mumbad Cycle. Unfortunately, Gingerbread's base strength and strength increase put it in such that many commonly-seen ICE are overpaid for, due to being at Strengths 3, 4, 6, or 7), and Deus X and Sharpshooter, while extremely cheap to use when breaking, have a high cost in terms of the recursion required, especially given the addition of Clone Chip to the MWL). This means that building a deck entirely around having multiple Panchatantra out will probably run into either money or recursion issues.

However, this card already tells us this, right in the flavor text. As g00ru's quote implies, this card is designed to be a support card through and through, and so Gingerbread, Deus X, or Sharpshooter cannot be the core of the deck, but instead should be the supporting pieces that overcome weaknesses in the deck. So, for example, perhaps maybe it has a role in an Exile: Streethawk deck that cheats out big breakers using Retrieval Run and Test Run/Scavenge, while using Panchatantra/Deus X/Clone Chip for surprise pressure on other servers before fully getting set up. Or, more likely, a heavy AI deck (be it Faust or Eater) that uses Panchatantra/Gingerbread to get through the AI-hate