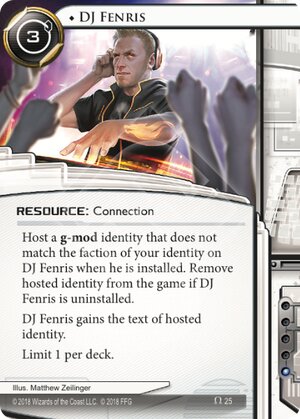 Host a g-mod identity that does not match the faction of your identity on DJ Fenris when he is installed. Remove hosted identity from the game if DJ Fenris is uninstalled.

Out of all the amazing cards in Reign and Reverie, this is the card that got people most excited. And I am not gonna lie, I am right up there with them. DJ Fenris is probably not the most powerful card in the set, but it is the most interesting one we have gotten in a long time. And it again makes me sad that the game is ending, so that we will never get new identities to explore his mechanic with.

For the cost of three credits, you get to import the ability of a g-mod ID that does not match your faction. This is somewhat similar to yet very different from Rebirth, which lets you go into a different ID from the same faction, as you forego your original ability. The g-mod restriction limits the number of ID's by quite a bit and that last part is important, as it takes away some of the obvious combos that exist within the same faction. Still, what makes this card so exciting is the huge amount of possibilities that still remain, and how it is incredibly fun to basically play with a duo of runners instead of just an einzelganger.

First off, let's look at all the possible ID choices you have and try to rank them based on their potential. Do keep in mind that how good an ability is, is very dependent on how you build your deck. Also keep in mind that Fenris is limited to 1 copy, which means it could be a while till you draw him. And which ID you go into is largely dictated by which phase of the game you are in. Having said that, some thoughts:

Noise: included because he is technically an option in casual play, but he is not legal anymore. Even if he were, only anarchs install a ton of viruses. While not possible, just thinking about him with Freedom Khumalo is giving me nightmares.

Chaos Theory: there are plenty of cards that give you 1 MU and then some for 3 credits.

Smoke: same as CT, you can get what you want out of her ID cheaper in a different card. The value in CT and Smoke as ID's is in their low deck size and their synergy with shaper cards, things you won't have as a criminal or anarch playing DJ Fenris.

MaxX: your deck needs to be build around her mill mechanic to profit, and I don't think any non-anarch ID wants to trash their deck for 1 free card per turn.

Kabonesa Wu: as with Maxx, your deck needs to be build around her ability to make this any good. She'd be solid in shaper, but alas.

Geist: bad to mediocre in most decks, fantastic in (pirate) Hayley. More on that later.

Reina Roja: good in the early and mid game to tax the corp. Bad late game.

Los: again, good in the early and mid game as you get free money. Bad late game as the corp will have most their ice rezzed. If you are anarch/shaper you likely also don't have many cards to derez ice, so you won't get the full value out of this ability.

Liza: situational, but the nuts in decks that can reliably get rid of tags through Citadel Sanctuary or runners who want to go tag-me.

Hayley: saving clicks is always amazing. Good in most decks, but bonkers in Geist and any other deck that installs a ton of stuff.

Two synergies warrant special mention. First off, the obvious one between Geist and Hayley. Pirate Hayley builds, with cards like Grappling Hook, Kongamato and Gbahali, receive a ton of tempo through Geist's ability, getting you free cards every time you use a trash ability. And he in turn goes into overdrive due to Hayley's ability to install two cards for the price of one, especially since he runs tons of cheap resources and breakers. Expect to see DJ Fenris as a staple in these decks.

The other one is the mini faction runners, who can go into g-mods of any of the three main factions, giving them a ton of possibilites. Unfortunately Apex can't install non-virtual resources, so it is out. I can't say how good DJ is in Adam, as I am not that familiar with his play style. Sunny however, loves this card. Early game you can save a ton of tempo with Hayley, her link and need for draw makes Liza a prime target backed up with Citadel Sanctuary, and late game she can recur her power cards with Steve. Mommy's got a new friend!

So yeah, if you couldn't tell already, I am in love with this card and want to put it into everything. And as it only takes up one deck slot and influence, I probably will. Just another great note for a bittersweet ending.

(Reign and Reverie era)
Cpt_nice 1715
Apex can install DJ Fenris facedown with his ability and then use Assimilator to flip him face-up. — Radiant 16 Jul 2018
That's cool! I never play Apex so I need others to tell me these things — Cpt_nice 16 Jul 2018
Flipping it face up doesn't count as installing it, so you don't get to use the ability. — EnderA 16 Jul 2018
I think there is exactly one case where Apex can actually install this card (face up) and that's if the corp plays Cerebral Static — Am 17 Jul 2018
This is more a rules question because Smoke is a bad choice anyway, but the recurring credit DJ Fenris would gain from hosting her wouldn't be a stealth one, right? He only gains the text box, not any subtypes. — CharmQuark 30 Jul 2018
That is correct, it would just be a single recurring credit for ice breakers. — Cpt_nice 30 Jul 2018
5

This makes runner IDs less distinctive and cool. This is not the way. Let Steve be Steve.

Secondarily, this card lacks a variety of viable options. I think I've seen it draw Quetzal once and Steve Cambridge every other time. (The other legal targets are currently Loup, Smoke, Kabonesa Wu, Los, Maxx, and Reina Roja). There are not many cards in Netrunner which interact with only one other card. :-/

If you're looking at Standard, here are your options:

And if you're looking at just ANY G-Mod (maybe you're an Eternal player who's.... new to the game?? (do those exist?)) then here is your search:

But really if you're wondering how you're going to use this card here are your more fun options:

Amusingly, it's not even Cloak with Smoke. Fenris doesn't inherit subtypes, so those recurring credits aren't stealth.