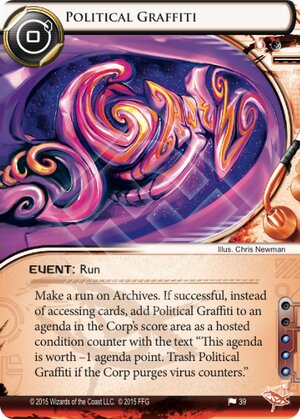 Run Archives. If successful, instead of breaching Archives, add this event to an agenda in the Corp's score area as a hosted condition counter with "Host agenda is worth 1 less agenda point. When the Corp purges virus counters, trash this counter."

How to annoy anyone aiming to score out in three easy steps:

1) Slap at least one copy of this on them

2) Wait for them to score up to the point where they win by purging virus counters. (OPTIONAL: Receive condescending advice about how this card isn't really useful)

(Fear the Masses era)
LordRandomness 234
Evil. — HowardistheJackson 1 Jul 2016
4) Play Populist Rally on the turn the File expires. Wonder how long it'd take the corp to get fed up and just try to score through... — LordRandomness 3 Jul 2016

This card is actually a cute little tool. While it does not hold its weight in normal scenarios (as the review by Gerrak shows) there is one application that has been overlooked so far. Playing it mid-game only has a minor effect, because the Corp can just spend one turn of purging or using Cyberdex Virus Suite. However this card would be rather good if it did not have that weakness.

And that's the point I'm trying to make: If the corp cannot purge, this card can cause an upset. This happens in tournament games that go to time. Suddenly if you were behind in a very long game with something like 5 to 3 points for the Corp you can win on your last turn by using three copies of this card. This assumes that first the game goes to time at all and that time is called on the Corps turn. Also you can hinder the corp if time was called on your turn and they would win by scoring a 1/2/3-pointer on their turn.

You can get into these situations if you're playing an econ-denial deck or you're up against a Museum of History deck. This applies to Gagarin-Museum and to a lesser extent to IG-Museum. IG does cover their archives regularly but is likely to prefer one or multiple copies of Crick to defend it. If time was called you might be able to let them install a card - assuming they don't have a copy of CVS in there.

So this is very niche but in some cases powerful tool. It might be a silver bullet for long Glacier or Museum games. The rest is said better in Gerraks review.

What an interesting card! "Interesting" does not necessarily mean "good," so let's take an in-depth look at the card and see where our opinion lands.

If we reduce the card down to its barest interaction, devoid of context, you're essentially paying one click and one card to bring the corp's agenda score down by -1, since most of the time the corp doesn't ice up archives. Unless, of course, you're Noise, or they're Industrial Genomics, or the cards Keyhole/Security Testing/Sneakdoor Beta are on the field.

That's not too bad, all things considered. But how useful is it really? Time to actually add some context and see. Here's the interactions and strategies you'll need to keep in mind when considering this card:

-For Anarchs with MU issues, this may be one of the best ways of dragging out the game... In other words, halting Fast Advance decks. Best case scenario, they'll purge and destroy your graffiti when they're at 4 or 5 points, signalling that they more than likely have an agenda in hand. Worst case, they score all the points they need and then purge after, which buys you a single turn at most. Thankfully, this is FA we're talking about here. That single turn could very easily mean the difference between a win or loss.

-Playing a second (or third) of these when one is already in the corp scoring area is probably a waste. Since a single purge is all it takes to get rid of all copies of Graffiti, unless -1 point isn't going to stop the win by itself, two or three of these is a overkill. Still, you using two or three clicks to make them use a whole turn isn't that bad of a trade, really. But definitely not a great one when you consider that you also used two or three cards on top of that. And even worse if they don't even use their whole turn and just whip out CVS.

-On the note of CVS, this card doesn't seem all that good in an already virus heavy deck. For example, if you're Noise, or any other Anarch who'll obviously be using a ton of viruses (ahem), the corp is already waiting to bust that CVS out at the earliest opportunity to ruin your day and set you back. So since they're already counting on purging viruses, perhaps multiple times over the course of the game, you could almost argue you're wasting clicks and cards to encourage them to do something they were going to do anyway! However, if this was in, say, a MaxX deck, where the only interaction CVS had was with Political Graffiti itself, the corp is probably likely to toss out such a card, thinking it to be useless. Thus ensuring three clicks will be devoted to getting rid of it. Nice.

-It's an event. Not a program, or a resource, like Clot or The Source. This means you can use Same Old Thing to put it right back in the corp's scoring area as soon as they purge it. This also means that unlike Clot or Source, it has hardly any ways to tutor it, while those other two have so many, such as SMC or Hostage. It also misses out on the instant speed interaction that Clot has with SMC and Clone Chip.

-This card has anti-synergy with Iain Stirling, depending on the board state. Which is funny enough in itself, but definitely begs the question: why on earth are you spending his precious few influence on this?

-Finally, and most importantly/unfortunately, the corp can very easily not care about this card, even if all three are in their scoring area. This card doesn't close scoring windows or make them harder to open. It doesn't actually take away points they've amassed either really. It just makes it take a little longer for them to activate. Heck, if the corp's main plan is flatline, they'll just see this and laugh. This card hardly even exists until game point, and then at most it just makes the game take one turn longer than it would have. Which it might not even do, if in that last desperate glory run to score you hit a CVS, allowing them to win on your turn. Talk about painful.

So far be it from me to render judgment over whether or not this card is "good," but from where I'm sitting, it ain't. In an Anarch deck it barely slows things down, and not even as reliably as their other in faction card, Clot. Outside of Anarch, you're barely slowing things down for a whopping three influence (or more)! I don't expect this card will see a lot of play. Perhaps some, but not a lot.

(Democracy and Dogma era)
Gerrark 182
Just a note, this doesn't get added to the Corp's score area as an Agenda worth -1, it gets tacked on to an existing Agenda and reduces the value by 1. This means it's not Weyland fodder, but it also can't be used if the corp hasn't got any Agendas yet. — LordRandomness 8 Apr 2016
@LordRandomness Doi, how did I miss that! Thank you. I updated as necessary. — Gerrark 8 Apr 2016
It's worth considering out of Adam, especially if you are running Datasuckers. It's a not a bad way to fulfill the first click run condition of Always Be Running. — FarCryFromHuman 8 Apr 2016
I'd say 3 influence each for a 'neat trick' is too much to fit into Adam — gamblingworld 8 Apr 2016
I disagree. Adam has a very solid basic kit to work with, and the Datasucker/fixed-breaker suite is influence cheap. IMO Adam wants to spend his influence on high-impact run events, which are typically high influence cost. I'm not sure Political Graffiti is the best use, and certainly not as good as say, Account Siphon, but it is worth considering. — FarCryFromHuman 8 Apr 2016
The wording of this card is not the same as The Board, the only other card that lowers agenda point values, it does not lower the value of an agenda by -1, it lowers the value of an agenda TO -1. — Tersr 8 Apr 2016
Not according to the head designer. Check out the entry in the UFAQ at http://ancur.wikia.com/wiki/Democracy_and_Dogma_UFAQ — jakodrako 8 Apr 2016
Maybe I'm mistaken, but I believe that it would also allow you to flip Archives without accessing vs IG (assuming they've accidentally scored something). — whirrun 8 Apr 2016
This will actually help your opponent if he or she is using Hive. — Zakalwe 9 Apr 2016
I can't see it being too helpful either. If you play it at the end of the game, it may give you one more turn to win, maybe. This card actually gave me an idea for a similar card that I think would be pretty cool. Data Corruption: Event 2 credits: Play only if you made a successful run on HQ and RD this turn. Add Data Corruption to an agenda in either score area as a hosted condition counter with the text, "This agendas text box is blank". This would be helpful vs a ton of agendas like a loaded astro or a utopia fragment. The most exciting application though in my opinion would be to put it on a stolen Global Food Inititive or 15 Minutes. — quailman2101 11 Apr 2016
@quailman2101 That's a cool effect for a card! It might need some way to counter it. However, as we can see with Political Graffiti, purging might be too strong of a counter. Similarly, it might be too weak as a current. Hmm.... — PureFlight 6 Jul 2016