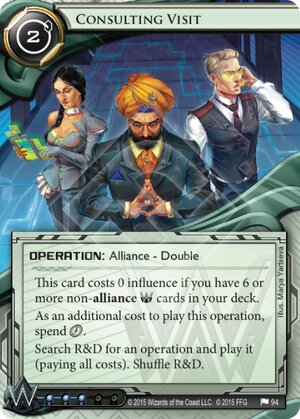 This card costs 0 influence if you have 6 or more non-alliance weyland consortium cards in your deck.

Search R&D for an operation and play it (paying all costs). Shuffle R&D.

Illustrated by Marya Yartseva
Decklists with this card

“See, the thing is…” The NBN executive tried not to sweat behind his ever-present smile. “There’s this fellow, this one troublesome fellow hacking all our stuff. And see, the darnedest thing is we KNOW where he is, but we just can’t get to him. What do you think we should we do?”

“Hmm…” The man hummed between his touching fingertips. He pondered for a while (two clicks to be exact), and left the room. When he returned he dragged in and slammed a large black crate on the desk, leaping the careful arrangement of toys into the air. “I believe this’ll do it.” The executive laughed nervously, and fumbled the latches with a mix of excitement and nervous anticipation. His eyes widened and he quickly slammed the lid.

“Surely you don’t expect ME to use that?”

“Who else?” The consultant patted him on the back and nodded over to his blond assistant “Josh, open the window.”

“See, man, the thing is…” The Weyland executive tried to not shake beneath his high-elbowed, W-shaped pose; he and his bros called it the Wey-dub. “We got all these things that go Boom(!), like, three of 'em all loaded up and ready. We just can’t find the smug bastard.”

“Hmm…” The man hummed between his touching fingertips. He pondered for a while (two clicks to be exact), and left the room. He came back and slid a small chit across the desk. “Try this. It’s a subscription to the new NBN series called ‘Through the Whizzard’s Window’.”

“Hmm…” The man hummed between his touching fingertips. He pondered for a while (two clicks to be exact), and left the room. He came back holding a sniper.

“Put me down!” She frowned, then straightened her collar as she peered at the contract. Upon seeing the target, her frown deepened. “So…you want me to kill a briefcase?”

Other fun things possible with CoViz include:

And pretty much any edge-caseoperation you might desperately need, but can’t fit multiple copies of in your deck.

At a time when there are any number of crippling threats to ruin your day, being able to grab a timely answer can make a huge difference.

Or perhaps things are going great and you’re swimming in cash, you’ve got most of the pieces you need for that combo sundae, but you’re you’re just lacking that single cherry to finish it off.

And one of the best things about it (which I failed to realise at first) is that it won’t cost you two clicks to play doubles. Consulting Visit covers the click you’d have spent on playing it normally.

Oh, and it can’t be trashed (traditionally) either, so that’s neat!

The only thing I’d caution newer players against is the temptation to dig for economy cards with it. After the ‘finders fee’ of 2 and the additional click, the usual burst of credits will feel more like a (slow) damp fizzle.

This card is amazing though, and after only a few games of being far less beholden to chance than usual, you’ll realise why runners hate it so damned much.

(Quorum era)
Tirranek 593
This pleases me. — H0tl1ne 18 Feb 2017
me too — Apex Predator 30 Jun 2018
"And one of the best things about it (which I failed to realise at first) is that it won’t cost you two clicks to play doubles. Consulting Visit covers the click you’d have spent on playing it normally." - I don't think that this is worded quite right... Click1 Play Consulting Visit, Click2 (Additional Cost to play Consulting Visit) - You can now pay your Operation. If it's a normal Op, then you just pay play cost, if it's a double, then you can use Click3 as the double's additional cost. You still have to pay the additional cost to play the double, but I think what you were getting at is that you can use this card to play a double - which is absolutely correct :D. (Fantastic flavour review btw) — HandKing 30 Jun 2018
4

Really? Is this REALLY what Netrunner needs?

Let's break it down. Mumbad City Hall is a stupidly, stupidly powerful card. It propels the Assetspam decks into an obscene powerlevel, has a frankly stupid interaction with Heritage Committee, and is more efficient than drawing and installing.

And now, for 2, , you can play ANY OPERATION IN YOUR DECK! Just by having this as a one-of in your deck and a City Hall on the table. This is madness. We already had an Asset toolbox more efficient than God himself, and now we have an Operation toolbox as well?

So what happens now? Now that the corp essentially can play with over half their deck in their hands, and gets to pick and choose whatever they like? Is this good for the game?

Maybe I'm just being hyperbolic. Maybe I'm seeing ghosts where none exist. I really hope it is so, because of this is as powerful as it seems, I fear for us all.

(The Liberated Mind era)
HolyMackerel 1106
Can this and interns work together? The "paying all costs" section makes me think this wouldn't work with doubles unless you had another click for whatever reason. — thejubilex 26 May 2016
One click for MCH, second click goes to double cost for CV, third click goes to double cost for Interns. It's a full-turn play, unless you are also rocking Jeeves. — FarCryFromHuman 26 May 2016
How would it work with Mumbad City Hall and Jeeves? If I MCH a Consulting Visit, am I spending 2 clicks on the same action or not? — DarthIA 27 May 2016
No. You spent 1 cilck on MCH, and 2 clicks playing operations. — Dunhere 27 May 2016
Play Subliminal Messaging before to trigger Jeeves — Ed_of_many_faces 2 Jun 2016
How about this: Weyland deck with a single copy of Consulting Visit, three copies of Mumbad City Hall and a single Localized production line? With a full tag and bag suite of course! — SerBrofist 7 Jun 2016
I am rather new to the game, if i look a double click operation with this card, would i spend a total of 3 or 4 clicks? So for example using this card to look up witness tampering i would spend 2 cloci — Aliusexalio 1 Nov 2016