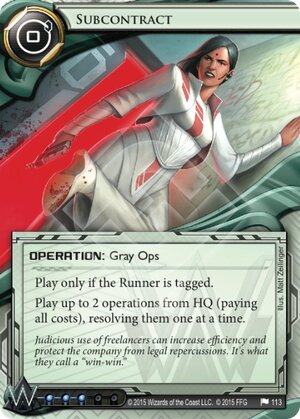 Play up to 2 operations from HQ (paying all costs), resolving them one at a time.

Judicious use of freelancers can increase efficiency and protect the company from legal repercussions. It's what they call a "win-win".
Illustrated by Matt Zeilinger
Decklists with this card

It's easy to underestimate this card. Gerrark made a nice review above, but I have a few extra things to point out.

For one, from the unofficial FAQ we know that you resolve all effects on the first card before even choosing the second card. As an example, if you have 6 creds, one click, a tagged Runner plus this, a Hedge Fund and a Restructure in hand, you could play the Subcontract, first play the Hedge Fund then choose to play Restructure, now that you can afford it.

With Plascrete Carapace heading for the dumpster, a surprisingly powerful side of Subcontract is that it does not allow any reaction that is not a prevent effect. Most notably, if you Subcontract two Scorched Earth or a Scorch and a Traffic Accident, the Runner will not have an opportunity to use their Sports Hopper to save themselves. Depending on what new damage prevention cards appear in the next few packs, this might be a huge deal.

Finally, this card hands-down takes the cake for "Most damage possible in a single click", with hilarious combos like 3x Subcontract into, say, three Punitive Counterstrike and a Scorched Earth. Mostly for hilarity, but as illustrated above, being able to pump out a huge amount of damage in a single click might become very valuable going forwards.

As a side note, there's a slight edge case with the upcoming Boom!. Assuming the Runner starts with one tag (unable to clear one or Posted Bounty before first click), you can use Subcontract into SEA Source then a Consulting Visit for your Boom!. Alternatively, if the Runner starts with no tags you can SEA Source, then Subcontract for your second SEA Source and your Boom!. While it certainly is an edge case, it might just become more relevant with Midseason Replacements gone.

The way I tend to play this card is to treat is as disposable unless I am sure I can get value from it, and I have no problems ditching it to Archives or using it to just get an extra click to play some econ cards unless I know I will need it for kills. However, it has honestly been performing much better than expected and is consistently enabling one-turn kills or fuelling double-Election Day-into-the-burn-you-needed-to-finish-this-game-right-the-heck-now miracles, and while I would never recommend keeping it in your opening hand, I have actually started prioritizing this card even over some kill pieces in certain situations.

(23 Seconds era)
The Real C 106
You've convinced me. I'll now be trying out Weyland Megadeath with this. — whirrun 14 Jul 2016
Let's maths out just how big a Megadeath you can make - of course, absolutely no reference is made to common sense or practicality. — The Real C 14 Jul 2016
There are, assuming I didn't miscount (I may have) twelve different 1-point Agendas that Weyland can use. *If* I am correct about recent clarifications, The Board lowers the value of each of those agendas by 1 while they are in the Runner's score area, but does not change damage done by Punitive Counterstrike. This means that maximally, the Runner could steal 36 of these 1-pointers-that-give-them-0 points (say, in a run on Archives) assuming you rezzed The Board before they got to access them. That's 36 points of damage from each Punitive. But there is more! Global Food Initiative should be worth 1 point in the Runner's score area now, but still contribute 3 damage, so 3 Global Food amps it up to 45 damage, with 3 points in the Runner's zone. Finally, let's for good measure add in three 2-pointers (say, Project Atlas) that each contribute 1 point to the Runner's score area and 2 points to Punitive - so each Punitive is now 51 damage. Triple Subcontract, triple Punitive and one Scorch to top it off - enjoy *157 damage in a single click*. No, no Sport's Hopper allowed, unless they "somehow" saw it all coming! Just hope there's no Sacrificial Clone... — The Real C 14 Jul 2016
I hastily add that while that is an amazing thought, it has absolutely zero practical applications, while my opinion remains that Subcontract is very much a serious card and may just prove to be an essential part of upcoming, full-on-serious-competitive-murderface kill decks. But 157 damage is good too. — The Real C 14 Jul 2016
Have you got a source for that Punitive/Board ruling? Sounds interesting. — Mattsetback 15 Jul 2016
The latest FAQ, found on https://images-cdn.fantasyflightgames.com/filer_public/95/7a/957a59a2-5fe6-4961-96fa-47560f337346/adn_faq_v31.pdf makes the following clarification to Punitive Counterstrike: 79 Punitive Counterstrike. Should read: “If successful, do meat damage to the Runner equal to the number of printed agenda points on agendas he or she stole during his or her last turn.” Meanwhile, The Board is not in any place stated to reduce the printed agenda value of any card; in fact I don't think there is any card that can alter printed values. All this also made me realize that if the Runner has The Black File out, then you could have scored three The Cleaners first, amping the final damage total up to 169 (an extra three damage from each of four damage cards), which I really do hope is the maximum possible or minds will start exploding. — The Real C 15 Jul 2016
2

Ever wanted to play three Scorched Earths on the same turn that you tag the runner with SEA Source? Now you can, and without having to spend a ridiculous amount of influence/money on a Biotic Labor or Jeeves Model Bioroids (Yes, I'm aware that the latter can be free influence-wise, but gotta remember all the other cards you're Haas cards you're slotting to make it free.)! Two Scorches is usually enough to make sure the runner bites the dust, but three? They're either dead, or out of protection.

That's all there is to say for this card really, and most of what it'll be used for too, I imagine. That being said, that is most certainly enough to guarantee this card will be finding its way into plenty of Weyland, and perhaps even NBN decks. One thing to note though, is that if you are using this card, you better include a way to make your hand size huge, draw a lot of cards on a turn (and without using clicks to do it, preferably), or be able to tutor specific cards from R&D, because no matter how you're using Subcontract, that's three of the cards in your hand.