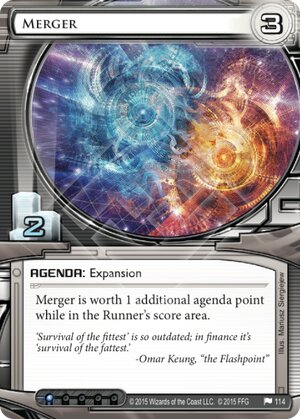 Merger is worth 1 additional agenda point while in the Runner's score area.

Survival of the fittest' is so outdated; in finance it's 'survival of the fattest.' -Omar Keung, "the Flashpoint"
Illustrated by Mariusz Siergiejew
Decklists with this card

Now, everyone knows that 3/2s are amazing. Even after the MWL nerf, AstroScript Pilot Program still holds the title of Best Agenda In The Game. ABT is good as well, and the "Projects" (Beale, Vitruvius, Atlas and, uh, Braintrust) see regular use, even in decks that have no intention of ever over-advancing them.

There's no question that most decks would gladly run blank 3/2s, especially Jinteki and Weyland. These factions only have their Project (and Medical Breakthrough) as real fast-advance options.

And then along comes Merger. A blank, neutral 3/2 for one influence, with a catch. It's a 3/2 to you...but a three-point agenda to the runner. This makes it a reverse Global Food Initiative--it increases the density of the agenda points in your deck, meaning that the runner needs to access fewer cards to win the game.

This creates a dilemma. A strong fast-advance deck can score out a 3/2 as soon as they draw it. But if you can't draw it fast enough, or if you get Clotted, suddenly that Merger becomes a 3-point liability.

This means that you need to do one of two things. The first option is just to take that gamble, and build your deck for speed. If you cram in 2/1s and 3/2s and round out your agenda suite with some Mergers, and decide that your goal is to score 7 points before your opponent gets their breakers down, then maybe Merger works. But it's inconsistent, and any influence spent on Merger is influence not spend on cards to help you actually score.

The second option is to play the numbers. The easiest way to do this is in Harmony Medtech. An agenda suite of 3x Braintrust, 3x Medical Breakthrough, and 3x Merger means that the extra point from Merger only matters if the runner steals two Mergers in a row to win. This could be an acceptable risk for a Medtech rush deck, particularly one using Trick of Light or Political Dealings, or which has murder as a backup plan.

The other way is somewhat counter-intuitive. If you build your deck with only three-point agendas and Mergers, you can force the runner to steal 9 points of agendas in order to win, while you can get away with only scoring 8 or 7 (depending on if you score one or two Mergers). This also takes you down to a relatively slim seven-agenda spread (five 3s, three Mergers) or a six-agenda spread (six 3s, one Merger), which would force both sides to score half the agendas in order to win. This is probably the best way to use Merger in Weyland and non-Harmony Jinteki, since they can lean on The Future Perfect or High-Risk Investment. Of course, this whole plan falls apart the second they pull off a "Freedom Through Equality"...

In summary, Merger asks a steep price for what it offers, and in general a 4/2 like Corporate Sales Team or NAPD Contract would be a better choice. But if you absolutely need the speed, and take steps to mitigate the downside, Merger might work.

(Fear the Masses era)
tiedyedvortex 4679
Harmony, you're right, but that's that... — rezwits 1 Jan 2017
but wait, if he scores two of them, Game OVER? doh — rezwits 1 Jan 2017
To date, he only deck where I've used merger is a Biotech FA deck with Political Dealings. Running nothing but 3/2s and 2 Improved Protein Sources to score with the ID flip. It certainly keeps the game thrilling — HyenaMars 13 Apr 2017
2

Now that the rotation is happening and Core 2.0 is shaking the meta, Merger is in an interesting spot. Most factions do not have 2 sets of 3/2 agendas anymore (except Jinteki if you count Medical Breakthrough) and with SanSan City Grid gone, fast advance (FA) will be harder to pull of. This also means that it is less likely that everyone plays Clot. In the right meta FA HB or NBN (maybe even Weyland) with Merger might work. Slot a set 5/3 together with the factions 3/2 and Merger and you have a nice FA setup requiring the Runner to steal 3 agendas instead of 4 with the usual Global Food Initiative setup most other corps use.

How strong it will be is hard to say and depends heavily on the meta that will develope after rotation but I will definitly try if Merger FA works.

(Crimson Dust era)
MrOshova 11
Revised Core gave all the corp factions one set of 3/2s from the genesis cycle. It still totally has a place in a FA deck, but it's totally still got competition. — OneQuarterPower 18 Sep 2017