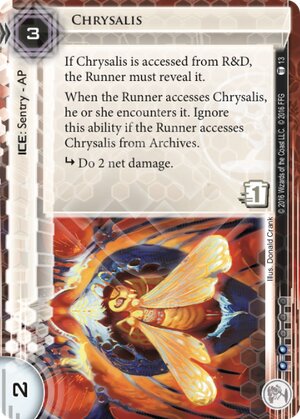 While the Runner is accessing this ice in R&D, they must reveal it.

When the Runner accesses this ice anywhere except in Archives, they encounter it.

Chrysalis is a piece of ICE that got a lot of buzz when it was first spoiled (Booo! Get off the stage!). However, it's been pretty quiet since the release of 23 Seconds. After all at the end of the day we're looking at a card that is basically 2/3rd of a Neural Katana for 3/4 of the price, and nobody even plays that card anymore! I think Chrysalis deserves a second look for certain Jinteki decks, even if it's numbers don't inspire pure worker-bee like devotion.

Unfortunately, we have to address the elephant in the room: Mimic. Once the runner has installed Mimic you are probably not going to want to waste your money rezzing this, and it becomes a mere 1-credit tax on the runner when seen from a central server (or 2 if they feel like trashing it). That's obviously a huge negative bullet point and is probably the entire reason we haven't seen a whole lot of excitement for this card past the initial spoiler. Another tough interaction is Political Operative, which it has been ruled can be used to trash any card with a trash cost, even Chrysalis once it has been installed and rezzed where it would normally be totally safe. I expect that's not a huge problem since usually Political Operative is being reserved by the runner to hunt important Upgrades but it's useful to know.

In short, I expect the overall power of Chrysalis to be directly tied to the relative balance between Criminal and Anarch in the meta. If we start seeing more blue this gets some good value. However, even in a poor meta-state for it I believe that this ICE deserves some attention simply for the deck slot compression benefit it offers. PE loves having yet another card to zap the runner from RnD, and Chrysalis is at it's best in a deck that doesn't mind leaving one of it's central servers wide open for a long period of time. Other Jinteki decks that have traditionally had trouble squeezing in the dedicated deck slots for prickly cards may appreciate the ability to have their cake and eat it too here.