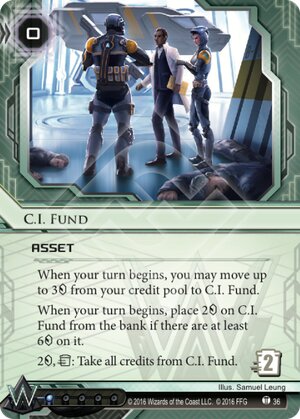 When your turn begins, you may move up to 3credit from your credit pool to C.I. Fund.

When your turn begins, place 2credit on C.I. Fund from the bank if there are at least 6credit on it.

Rather than compare this to Algo Trading and discuss whether this is better or worse than a very bad runner card, I'd like to analyze C.I. Fund by itself.

A little bit of math tells us that you'll need to have CIF on the table for several turns before it changes from "expensive click-bait" to "econ card". Thankfully it's free to rez, and you can start investing in it the turn you rez it.

CIF's one saving grace is that you can take the money if a runner runs on it. After 1 or 2 turns investing, you can pay 2 to gain back your 3, so you've lost 2 and the to install. After 3 turns, you've only lost the . And after 4 turns, you will still profit from this, even if the runner runs it.

After 5 turns, it becomes the world's slowest Hedge Fund. I'm not convinced the 5 turns of protecting this thing make it worth the "Royalties with upside" effect.

The obvious weaknesses of the card are:

It's looking bad. Let's try to make up for some of those drawbacks in the hypothetical situation that you actually wanted to include this in your deck.

Ultimately, CIF is doing what you don't want to do as corp: take forever. Yes, you could put this in your scoring server like you do an Adonis Campaign, wait 6 turns to make decent profit, then take your money and IAA an agenda. But that's 6 turns the runner had to set up and work towards their end-game.

So yeah, it's probably better than Algo, but only marginally. ;-)

I'll just direct you to tiedyedvortex's review of Algo Trading to let you know how monumentally bad this card is.

The only redeeming feature of this is that if the runner runs to trash this, you can get back the money that you basically wasted on setting this bad card rolling.

Edit: With Tapwrm being the new hotness at the time of this edit, I can see this being a plausible include for CTM if you want to keep your total credit pool low for Tapwrm, but get rich enough to hit the runner with SEA Source into Exchange of Information.

Almost certainly not actually worth doing, but I thought it an interesting interaction that ought to be highlighted, particularly as you can cruelly put it on a Mumbad Virtual Tour if you can spare one to protect this hot garbage.

... of course, Sealed Vault will do about as well here, just be sure that you don't lose everything to a cheeky Polop

(Blood Money era)
Quarg 254
Honestly this is arguably worse than Algo Trading. Out of all the amazing/interesting cards in Blood Money this is the true dud. Maybe it will get some support in the future; an agenda that can place credits on cards when scored? Regardless its going to have to be a strong play to justify the combo. — FarCryFromHuman 25 Aug 2016
On the start of the 2nd turn after you rez this, do you or do you not already move 2c from the bank to it? — yoriagami 14 Sep 2016
...by choosing the order of the triggers? If you do, this becomes "not so bad" I think, and perhaps usable in Gagarian / IG / CtM. There would be a single turn of opportunity where it had cost you 3c; on the next turn, it would already break even, even click-wise since the Runner also has to spend a click to run it. Gagarin for example makes the Runner's trash cost == to the 3c you "risk" on that single turn, making it, at worst, a matched cost with what the Runner has to cover. Thoughts? — yoriagami 14 Sep 2016