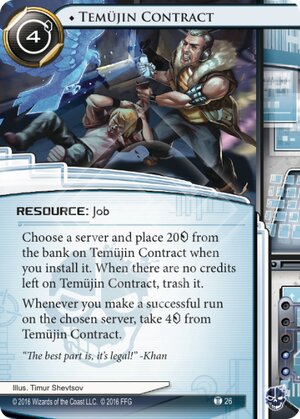 Whenever you make a successful run on the chosen server, take 4credit from Temüjin Contract.

"The best part is, it's legal!" -Khan
Illustrated by Timur Shevtsov
Decklists with this card

Criminal have been in a pretty weak position lately. Anarchs have been dominant, and it seems as though any attempt by the MWL to bring them back into line just causes Shaper to pick up the slack.

Temujin Contract, I think, is an attempt by the developers to bring Crim back. Because hoo boy is this card good.

This is, obviously, an economy card. And the value of an economy card is the number of credits it provides you above and beyond the things you would have been doing anyway. With that in mind, there are two ways to size up Temujin Contract. Similar to how Dirty Laundry works, you can make throwaway runs, or valuable runs.

This is bonkers amounts of money, but there is a catch: the corp can cut into your profits by putting ice in your way. To avoid this, you'll probably want your Temujin turn to be "Install, run three times", which lets you get a lot of value before the corp has a chance to respond. In fact, you're making 8 credits over 4 clicks, which is 4 clicks on a Mopus or a Day Job, and you still have two 4-credit runs waiting for you if they don't ice up.

At this point, the corp will generally throw down something to stop you. For most pieces of ice, the cost to break it twice exceeds the cost to rez it: Enigma costs 3 to rez and 2 to break with a Passport, so by playing it they are reducing your Temujin payoff by 4 for a cost of 3 and a click. A more efficient taxing piece of ice like Eli 1.0 or Data Raven might even put them ahead.

And they know that you will, eventually, need to get into that server to clean off the rest of the Contract. Why? Because Temujin Contract is unique. So long as you have one on the board, you cannot play another one to replace it. So by blocking the completion of the first Contract, they are blocking you from playing the other two you probably have in your deck. And once they've iced Archives, the second Contract would need to find a new server to target. This gives them a pretty strong incentive to slow you down.

[EDIT: The previous paragraph is incorrect. The rule regarding unique cards is that if a second copy ever becomes active, the first copy is trashed. So you can forfeit any remaining credits by playing a new Temujin contract, although this is not generally optimal.]

This is all assuming, however, that you are running a server for no other purpose besides income. But Temujin Contract does not replace accesses. In fact, it places no requirements at all, besides "successful run on the chosen server". This means, then, than you can play the Contract targeting a server that is actually valuable, like R&D or HQ.

In this case, Temujin is essentially reducing the cost to get into that server by 4 for the next 5 runs you make on it. Since you aren't throwing away the run, this raises the economic value of the card from +10 to +15. But in doing so, you are again giving the corp an enormous incentive to ice the bejeezus out of the targeted server, not only to slow your economy down, but to stop you from getting those accesses.

But hey, this is Criminal. Forcing the corp to rez ice, forcing the corp to protect their central servers at the cost of their scoring remote, and making money by running, all of these are solid strategies that synergize super well with what Criminal is trying to do. If Gabe with a Desperado files a Temujin Contract on HQ, then Emergency Shutdowns the ice protecting it, the corp is going to have to scramble to keep it locked down. Meanwhile you can Account Siphon them, Legwork, them, and just when they think they've got it secured, you can play that Sneakdoor Beta and get in sideways. Tasty.

It's only 2 influence, though. Which is sad, because it means that it's probably not going to be played in Criminal decks as much as it really deserves. Instead, the Anarchs and Shapers will import it to fuel their late-game Keyhole/Medium/R&D Interface digs.

In summary, Temujin Contract puts a huge strain on the corp to either fortify the targeted server, or let you walk away with ludicrous dosh. A deck that wants to make money by running and that can capitalize on this pressure will love Temujin Contract.

(Blood Money era)
tiedyedvortex 4728
"Why? Because Temujin Contract is unique. So long as you have one on the board, you cannot play another one to replace it." This is incorrect. If you install a new Temujin Contract it trashes the old one. — triorph 16 Aug 2016
D'oh, you're right. I misremembered the rules on unique cards, I thought it was the newer copy that got trashed, not the older. Fixed it. — tiedyedvortex 17 Aug 2016
"It's only 2 influence, though. Which is sad, because it means that it's probably not going to be played in Criminal decks as much as it really deserves." I'm a bit out of the loop on the meta right now or the ins and outs of things like that, but why does it being 2 influence make it less valuable for Criminals? — RexDolorum 21 Dec 2016
9

"Let our mutual friend hold on to your contracts while you load up your rig. You can also get more from what you do. We don't disapprove of any methods you might employ. Oh, and remember, trash anything important to our... competitors... once you're done."

"The best part is, it's no longer tournament legal!" - Boggs. This was a meta warping, ridiculously efficient card only rivaled in power by the other cards that have been banned. It feels good to see it gone.

(Crimson Dust era)
r2devo 15
I'm very happy/impressed by the changes. It's funny; after looking at the new restricted/banned list, I kept thinking, what about Breaking News-24/7? That is the worst combo ever. And what about SanSan, I'd hate to see that in every deck again. Then I looked at the new core set again and realized those problems were solved too. Then I was worried about Blackmail again. But then I remembered that it is cycling out. Between the new core set, the new MWL, and cycled cards it looks like they’ve solved all the major issues. I am excited! — quailman2101 28 Sep 2017
Funny that some cards are no longer tournament legal whereas some cards with subtype Illicit are legal. — Him 28 Sep 2017
5

I won't go deeply into the many merits of this card as tiedyevortex brought them out nicely. But as he mentioned, I too wish this card cost more influence. It is an unbelievably good card. In my mind, every criminal deck from now on will auto include three of these unless they plan on floating tags. This means when you are facing a criminal, you basically need to ICE archives and right away. And not with a Vanilla; something that costs at least two to get through probably. This can be a burden early game as you are setting up. But if you don't you may find the runner with 30 plus credits in the first few turns. I faced an Andy the other day, and she got up to over 50 credits in the first five or so turns, and she didn't even have her Desperado out yet. The game did not go well for me. Horizontal decks are going to have a very tough time, as their PAD Campaigns are turned into easy money for the runner and then trashed. Indeed, since this card was released, I have faced almost no asset spam decks. I've seen a few NBN: Controlling the Message and one or two Industrial Genomics: Growing Solutions. But CtM is new and exciting so you expect to see it played, and IG is pretty broken since the political assets and Dedication Ceremony were released. But that's it, no Near-Earth Hub: Broadcast Centers or Gagarin Deep Space: Expanding the Horizon, not one; for me at least.

That's fine I guess, maybe criminals needed a new, solid economy card. The problem is, I am seeing it everywhere. It is being imported by everyone. I put two into my new Golden Library shaper deck and they are paying off big time. That is why I wish it cost three or maybe even four influence. People have paid two influence to include cards like Lucky Find, or Bank Job, or even Liberated Account. This card is way better than any of those. Maybe it'll be on the MWL eventually.

There may be a bit of silver lining for the corporations. After installing and running three times the first turn, I've found many runners to be eager to run for those last eight credits right away, even though you've ICED it and they may not be prepared. I've been playing around with Brainstorm lately and have caught many a runner with their pants down.

(Blood Money era)
quailman2101 277
I don't know if the people that design this game know what they're doing anymore. This card makes so much money that trying to tax runners and vertical strategies in general appear obsolete. Scoring window? Ha, what's that!? — pandaman64 10 Sep 2016
I do think several cards that have been released recently are terribly unbalanced, or have the wrong trash cost, or influence cost. — quailman2101 12 Sep 2016
3

I think this card is the worst offender in messing up the balance of power between corp and runner recently. No one should regularly have more than 15 credits, and certainly not on turn 2... And it's not like it's easy to shut down. They'll get that money sooner or later. If you specifically try to counter it, then it also succeeds in forcing you to play a slower game and ice things you wouldn't have cared to. Every faction imports it, so you'll potentially see it in every game, and there's no clear sign that it's coming - you just play paranoid or accept that your opponent might suddenly get two Hedge Funds' worth of credits, with two more imminent.

Funny that in the cycle about the economy crashing and everyone losing their jobs, runners are so rich as to make paying for anything trivial. Thanks FFG.

(Martial Law era)
NoSoup4you 59
Maybe that's the point. While the average Joe suffers, us cybercriminals are taking advantage of the chaos. — HollowsHeart 9 Jan 2017
Temüjin is Genghis Khan's birth name. Having conquered a vast land, he and his successors encouraged trade and exchange. Mongols valued goods that came from other lands and peoples. — Him 12 Jan 2017

Your article content is inconceivably fascinating. I'm inconceivably charmed with your post. I want to get more astounding posts.

Your article content is inconceivably fascinating. I'm inconceivably charmed with your post. I want to get more astounding posts. <a href="https://www.mybalancenow.ltd/">Target Card Balance Now</a>