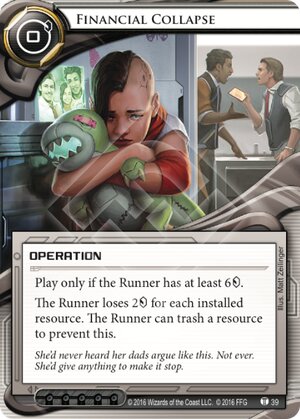 Play only if the Runner has at least 6credit.

The Runner loses 2credit for each installed resource. The Runner can trash a resource to prevent this.

She'd never heard her dads argue like this. Not ever. She'd give anything to make it stop.
Illustrated by Matt Zeilinger
Decklists with this card

I mean, the card itself isn't broken, mechanically speaking. It's a way to punish runners with resources. If the runner has six credits and three installed resouces, they have to choose between going broke or sacrificing what could be a major part of the strategy. It's a meta call, depending solely upon the relative prevalence of event economy vs. resource economy vs. program economy in runner decks.

No, this card needs to die because it's soooooo sad. Chaos Theory has always been the most adorable of the runners. She has a stuffed animal as her console and they are best friends. They go on Exploratory Romps together. They audition for movies together. Even when the big meanies at Weyland get their hands on Dinosaurus, she sticks with him and fixes him because she's just such a nice person. (Note the band-aid in the card art for Financial Collapse.)

I like the world of Android Netrunner because it's exciting and dramatic and thrilling. I'm okay with blowing up entire city blocks, with political fraud, with self-murder, with martyrdom, with the systematic exploitation of both sentient AI and human clones, with violence marketed to children, with scapegoating, with conflicts of interest...all fine and good.

But I am NOT okay with this card. It is wholly and completely unacceptable to introduce her family (look how happy they are in that family photo!) and then show her crying over money issues. It's too goddamn real. All I want is for her dads to take CT in their arms and tell her that everything is going to be okay, but that can't happen because it's a lie, because some asshole runner hacked some corporation and now nothing is ever going to be okay again and oh god I'm actually tearing up.

In all seriousness, mad props to FFG and to Matt Zellinger for the emotional sucker punch of this card. Also, respect for having not just one but two stable, happy homosexual marriages with kids. For all the darkness and fear in the Android universe, there are a few moments that suggest that maybe things aren't as bleak as they seem.

(Blood Money era)
tiedyedvortex 4728
For added feels : Realize that Chaos Theory is in large part responsible for the situation, since she was one of the runners mindlessly crapping over Titan's financial records during the Flashpoint Incident. — Akanthinos 17 Aug 2016
There's just Sunny and her two kids in the art for Another Day, Another Paycheck. I don't think there's been any indication of her having a partner on any released cards (I haven't read any fluff involving her outside of cards). That points to her being a kickass single mother, than being married so far. — stringtheory 20 Aug 2016
No, she's mentionned to have a loving husband that's very supportive of her work. Can't correctly remind from where tho, sorry. — Akanthinos 21 Aug 2016
Lukas confirmed Pat's female. — Sunyavadin 21 Aug 2016
In this tweet > https://twitter.com/rukasufox/status/643862959006085121 < in fact. For more information on their relationship, and how Sunny's working on saving enough so Pat can stop working long haul trips to Mars which leave Sunny looking after the kids, check out the intro piece to her on FFG's website from just before Data and Destiny. — Sunyavadin 21 Aug 2016
Ah! Knew she wasn't a single mom, but I assumed Pat was a man's name. Thanks for correcting me! — Akanthinos 23 Aug 2016
Between this and Boom!, I think Netrunner is trying to account for the runners that will no longer be around next year. — JonasAlbrecht 22 Sep 2016
I think this is trying to build up how she will grow up. Since she is the next Core Set Shaper now. — Akira.Chisaka 28 Sep 2017