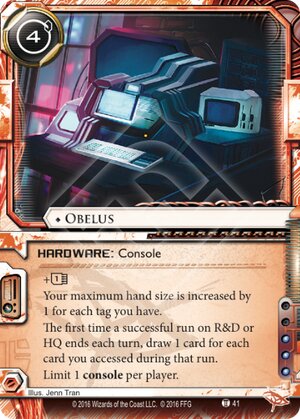 You get +1 maximum hand size for each tag you have.

The first time each turn a successful run on HQ or R&D ends, draw 1 card for each time you accessed a card during that run.

Illustrated by Jenn Tran
Decklists with this card

Step 2: Use your Hades Shard during a paid ability window during the run

Step 3: Draw your deck after the run ends.

This is a wonderful console for tag-me Anarchs and a good counter to the tag heavy meta we find ourselves in.

This is the last of the Omar-related flavor/educational reviews. I decided to do these, not only because I love the flavor and references within this game, in general, but because I'm becoming an Omar fanboy. Anywho...

An Obelus, more commonly referred to as a division sign, comes from an Ancient Greek word for a sharpened stick or pointed pillar. Interestingly, before its mathematical implications, this sign was used in texts to mark passages believed to be corrupted or false. Such passages were marked as such to be deleted, or censored, in line with the conspiracy theme. Seems to fit fairly well with Omar.

Obelus adds to the long list of playable Anarch consoles. Some of interesting aspects of the card:

The obvious synergies with Obelus are the Anarch viruses that scale the number of accesses with every successful run: Medium and Nerve Agent. If you hit a central server three times in a row, you'll only draw the first time, but then the next turn you're threatening to pull a fistful of cards and access a bunch. It's an extremely powerful effect that's mitigated by the set up: you have to be able to access a bunch of cards (e.g. be winning already), Obelus' 4 cost is nothing to shrug off, & just one MU isn't that great either in a faction that's notoriously strapped for memory, so much so that MemStrips is a card that's seen play.

Overall I think this card has two incredibly interesting abilities that are somewhat hard to take advantage of. In the right deck, Obelus is very powerful, but it's nowhere near as general-purpose as Turntable or Grimoire, which will likely continue to be the go-to console choices for Anarch.

(Escalation era)
phette23 2261
There is the option of course to tag yourself. This would probably mean importing this into criminal or account siphon into anarch. Either way, it is a lot of influence. But I still got to try it out. — quailman2101 14 Oct 2016
For self-tagging, I brought along Paparazzi and Joshua B in my last game with this console, neither of which cost influence. — N0-1_H3r3 15 Oct 2016
Joshua B imo is not a reliable tag option plan. The corp's gonna trash him the first chance they get than give you five clicks all game. At most you'll gain the click you spent installing joshua b. events, hardware or programs that tag would be a better option. — johnofarc 15 Oct 2016
It's not reliable, but I don't necessarily mind cards like that which coerce my opponent into spending clicks and credits to deal with me rather than focus on their own play. Plus, a Wireless Net Pavillion pushed the cost up a bit more, which in turn helped me slip past some ICE he could no longer afford to rez. — N0-1_H3r3 15 Oct 2016
Would Paparazzi even work for this kind of self-tagging? Doesn't it 'make you tagged' rather than actually giving you a tag? — Mattsetback 17 Oct 2016
Activist support, John Masanori are two very reliable self tagging options. If you are running anarch heavy you could amped up and give yourself up to 7 tags in a full turn, brain damage doesn't matter much when you're increasing your hand size so dramatically. I wonder if Game day and Beach Party are worthwhile includes in a Omar deck. — killj0y 18 Oct 2016
John only works once per turn for each effect. — quailman2101 19 Oct 2016
Paparazzi does not work, in much the same way that you cannot remove the Corporate Scandal bad pub to prevent All-Seeing I. — phette23 26 Oct 2016
So far no one has mentioned Hades Shard! — daytodave 31 Oct 2016
Right, for people who missed it: you can pop Hades on an HQ/R&D run to access Archives, then draw additional cards equal to the number of cards in Archives. There's a game on Dodgepong's stream where @murphy draws 17 cards with Hades :) — phette23 10 Nov 2016