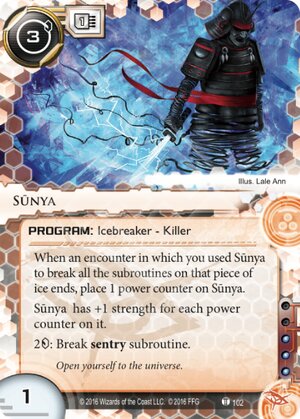 Whenever this program fully breaks a piece of ice, place 1 power counter on this program.

This program gets +1 strength for each power counter on it.

Open yourself to the universe.
Illustrated by Lale Ann
Decklists with this card

So the problem with this card, I think (and I mean the philosophical problem, not one of the many game play problems), is that it's clearly meant to be a pet card for Null. And while I'm certainly in favor of him having his own suite, he already had two thirds of one the second he was released. All they needed to do was release Nfr, which they did, and he had his own suite. It was mostly unoriginal, but it worked. Except for Nfr. Just use Corroder or Paperclip instead.

Aaaaaaaanyway, that's why this card doesn't work. Because it could never have worked. It was trying to fill a niche that was already filled from the get go, and filled pretty perfectly I might add. That left two outcomes--Either the card would be terribly weak, or terribly strong. I'm glad they went with the former personally, but it's still a shame.

Really, the only way this card could see play is if we start seeing tons of high strength, cheap sentries, or if something happens to Mimic. Only then could this card have a chance.

(Quorum era)
Gerrark 186
So true. Especially because of the 2:1 break cost, which is always aweful, especially for killers. — Krams 18 Jan 2017
It's a shame this breaker is so lame and so eclipsed by mimic because the artwork is very cool. I don't understand why FFG made this 2 creds per break, it makes no design sense. — DGB123 6 May 2017