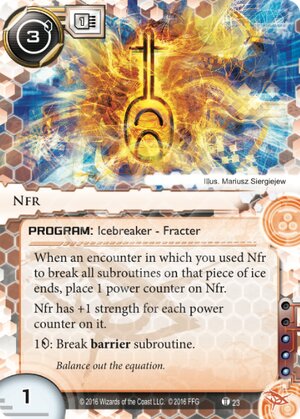 Whenever this program fully breaks a piece of ice, place 1 power counter on this program.

This program gets +1 strength for each power counter on it.

Balance out the equation.
Illustrated by Mariusz Siergiejew
Decklists with this card

A bit of lore: "Nfr" is an ancient Egyptian hieroglyph meaning "good", "pleasant", "well", or "beautiful" depending on context. The pronunciation is something like "Nefer" or "Nafer"--in fact, it's the first part of the name of the Egyptian queen Nefertiti, wife of Pharaoh Akhenaten.

The tradeoff between these two types of breakers is power versus reliability. For any piece of ice strength 3 or below, Mimic is one of the most efficient killers in the game, and Yog.0 is literally free to use. But, there's a catch--getting through any high-strength piece of ice becomes impossible without additional support, and even with Datasuckers and the like it can be difficult. As such, these breakers encourage an aggressive playstyle--try to win by chewing through weak early-game ice over the central servers, before the corp manages to get a Wormhole or Archer rezzed. At the very least, you can use this to rack up Datasucker tokens.

But there wasn't a fixed-strength barrier breaker that fit with this approach. Sure, Morning Star existed, but it was extremely expensive, preventing the runner from using it to fuel their early game. Once in a while you'd see it played in a MaxX/Retrieval Run deck to cheat it into play, but outside that pretty much never.

Nfr is an attempt to fill that gap. But does it?

Let's start with the big weakness. It only starts at 1 strength. That's a huge problem, when you consider that barriers tend to be taxing based on strength. If the corp manages to get a Wall of Static on all their central servers and purges your Datasucker tokens, you are locked out if you haven't managed to break a couple weak barriers yet.

This is a worst-case scenario, though. If Nfr is your only fracter, you're probably playing Null and/or Injection Attack. By using these cards, you can break a Wall of Static once; and if you can get break it twice, then you're set for life. Even if the corp plays a bigger barrier like Hadrian's Wall, you can still get up to strength by using the smaller barriers as a punching bag.

But here we hit upon an issue. See, corps can use barriers in either a "fast" or "slow" context. A fast corp deck will use the cheapest barriers available to them--Wraparound, Vanilla, Ice Wall, things of that sort. The logic here is that, for a runner without a fracter, all barriers are equivalently powerful but not equivalently costly, so why spend more than you have to? The challenge here is "can you find your fracter?"

Other corps, though, have a slower gameplan. They will have some medium-sized barriers (Eli 1.0 is common even with the MWL cost), and some larger barriers (Fire Wall or larger). This archetype assumes that you will get your fracter quickly enough that the gearcheck ice isn't valuable. Instead they just want to make servers that the runner cannot afford to get into.

Nfr, though, isn't effective against either strategy in isolation. If the corp is playing fast, then Nfr is no better than a Corroder, and costs an extra credit to install. But if the corp is playing slow, then it will be immensely difficult to get up to strength. And how often do you see a deck install both cheap AND expensive barriers over the course of a game?

Nfr is just too inconsistent to rise out of the jank designation. And with the amazing Paperclip right next to it, I really don't see a reason to play it seriously.

(Blood Money era)
tiedyedvortex 4728
It has cool art but I can't see any reason to play this over paperclip, even in a deck running datasuckers and ice carvers. Maybe if it broke multiple subs per credit it would be worth building around. — DGB123 24 Sep 2016
With Sifr coming out now and Null, I can see a place for this in a deck that uses those and maybe Datasuckers. It is a lot of work to get the benefit, but it could be a significant economic advantage as the game goes on. — FightingWalloon 12 Jan 2017

Paperclip is MUCH better against rigshooter than Nfr is. That alone makes Nfr almost unplayable in comparison.

I was curious at what point Nfr becomes more economical than Paperclip, assuming Nfr has been sufficiently charged up already. Here's the tally:

So for 1 sub barriers Nfr is 1 cheaper for breaking than Paperclip. But before you get there it has to be charged up 2 times. And looking through the list of barriers strength 5 barriers are rare: 5 total (2x 1 sub, 2x 2 subs, 1x 3 subs).

Really the only time Nfr is really worth it to include is if you know while building your deck that you're going up against ice like Hadrian's Wall and Orion.

(Free Mars era)
Silv 347
I guess it's a great counter against BWBI slowly building up that 10 token Fire Wall on HQ used for Commercialization and OTG/Crisium scoring. You know, to help you against the one guy out of 10,000 who plays something like that :D — Krams 3 Aug 2017
I think I've come close to walls that strong. Was really fun locking out a criminal with something like 12 programs and Spike as barrier breaker. — Silv 3 Aug 2017