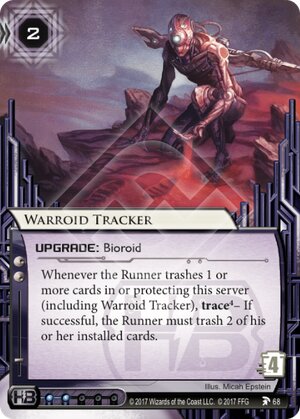 Whenever the Runner trashes 1 or more cards in or protecting this server (including Warroid Tracker), trace [4]– If successful, the Runner must trash 2 of his or her installed cards.

Illustrated by Micah Epstein
Decklists with this card

A very, very powerful upgrade. Probably too powerful. For a mere 2 credits, you can now defend literally any card you want. Some notable combos:

Ash 2X3ZB9CY. You win this trace. They go to trash Ash. Surprise another Trace! Have fun losing 2 cards! Actually, Warroid Tracker combos ridiculously well with any high priority asset or defensive upgrade. Having to endure this is probably super irritating. Probably only slightly less than Caprice Nisei and Ash 2X3ZB9CY. Even after dealing with all this shit, the corp plays Hellion Beta Test and makes the runner even more sad.

Crisium Grid and Off the Grid. Really makes it sting. Do they trash this and not deal with it? Shelling out and extra 4 credits? or do they trash Crisium and spend 9?

Overall I think this is a very powerful card and an interesting replacement for the soon to rotate Defensive upgrades. Hell, maybe even MWL material. time will tell. Oh yeah it can't be Rumor Milled. Fantastic.

(Blood and Water era)
Handsome Jack 1589
While this card is really spooky, it should also be noted that it doesn't do anything to protect agendas on its own, and even with PriSec a prepared runner can just shrug the damage/tag and run off with your GFood or whatever. Especially as we head closer into rotation, the porous nature of these replacements in comparison to classics like ASH and Caprice need to be noted. It's still really frightening, but it needs to be handled well and comboed to really shine unless I'm missing something big. — OneQuarterPower 23 Jun 2017
Its agenda protection ability is somewhat questionable but I think it makes up for it in its central power and the ability to protect Regions. trashing that SSCG becomes a lot harder whn you have one or more of these protecting it. — Handsome Jack 23 Jun 2017
You can rez this for free out of AoT — YankeeFlatline 24 Jun 2017
I don't think the Crisium/Off the grid combo will work with Warroid, as the Crisium grid is *in the root of* HQ and not in the server (nothing is there) or protecting this server (ice) — zmb 17 Jul 2017