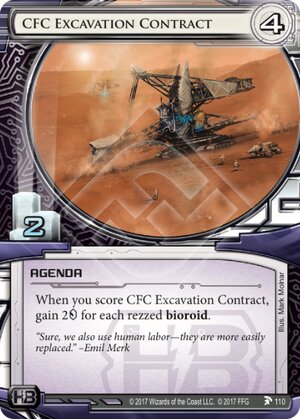 When you score CFC Excavation Contract, gain 2credit for each rezzed bioroid.

"Sure, we also use human labor—they are more easily replaced." -Emil Merk
Illustrated by Mark Molnar
Decklists with this card

This is a good way to fill out an agenda suite in AoT. The ID ability ensure's you'll have plenty of rezzed bioroids. Combine that with the now safe ASH and Warroids and it's not unreasonable to think you'd have 4 face up bioroids by the time you try to score your 2nd agenda.

The immediate payout also means if the window's still open you can immediately jam another agenda next turn or even potentially get the money to Biotic out a 3/2 giving you a very rapid scoring pattern. Unlike Nisei which helps you defensively, CFC really hits the gas peddle.

Outside of AoT you're probably not running enough bioroids to ensure you'll have enough rezzed when you score this to make it better than Sales Team.

CFC Excavation Contract (CEC) is a generally-worse Corporate Sales Team (CST) for HB. The main differences are that CEC gives money immediately upon scoring instead of 1 per Corp and Runner round like CST does and that CEC has a variable payoff of 2 per bioroid instead of the fixed 10 of CST.

Here's why CEC is generally worse: you need 5 rezzed bioroids to match CST. This is a list of bioroids. 3 assets (Alix T4LB07, Bioroid Work Crew, Ronald Five), 2 upgrades (Ash 2X3ZB9CY, Warroid Tracker), 25 ice and identity (Adam: Compulsive Hacker). Not sure if Adam counts for CEC, but it would be amusing if he does.

Anyway the biggest name of the non-ice corp bioroids is Ash 2X3ZB9CY and he'll rotate out as soon as FFG declares rotation (last I heard it's when Worlds starts, which would be somewhere early November).

I think it's fair to say that most of the bioroids used for CEC will be ice. In a deck purely built around bioroids it's indeed doable to rez 5 or more roids. But how many do you think you're actually going to have on the field? I'd say 7 is a reasonable upper bound in the late game. That would mean 14. However this requires scoring CEC at the right time. If you score it when you just have a few bioroids rezzed you might make 4, just enough to replace the credits used to advance CEC.

Yes, there are cases when CEC will outdo CST. But if you value consistency CST is the better option.

(Crimson Dust era)
Silv 344
Too bad Adam's ID card isn't technically 'rezzed' despite being face-up. It would be hilarious. And I could see this agenda filling up points in an Architects of Tomorrow deck that already has 3 CSTs. It's easy enough to build a deck with 14+ bioroid ICE. — Krams 22 Aug 2017