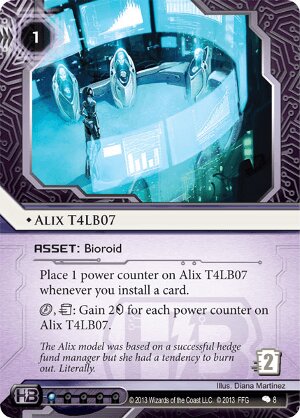 Place 1 power counter on Alix T4LB07 whenever you install a card.

click,trash: Gain 2credit for each power counter on Alix T4LB07.

The Alix model was based on a successful hedge fund manager but she had a tendency to burn out. Literally.
Illustrated by Diana Martinez
Decklists with this card

Alix is both a powerful, and a fragile asset. Find Alix and protect her early and every install thereafter will be potential 2 to reap from server building, but her potential for serious profit makes her a high-value target for trashing, and at 2 she needs protection from strong, early ICE. Balanced by the need to to convert the power counters to credits, failing to decide on the right moment to burn her could see a massive loss in a potential credit swings.

The best contenders for utilising Alix effectively are Haas-Bioroid: Engineering the Future and Blue Sun: Powering the Future. ETF has had major success with the Breaker Bay Grid + Adonis/Eve Campaign combos that Alix will be second fiddle to more reliable economy drips, but Blue Sun has the best potential to utilise her effectively.

Blue Sun's 'pull back and re-install' ability is what keeps it comfortable for rezing high-cost ICE, so the corp will typically be packing Curtain Wall, Hadrian's Wall, and even Janus 1.0. Combine this corp ability with Alix and she can generate a large number of power counters quickly, securing the mid-to-late game, (providing you know when to cash in the chips.)

Do not sacrifice campaigns for the potential of Alix. Use her only if you're confident you have powerful ICE to keep the runner at bay for a number of turns, (but then consider that you could be advancing agendas in that remote instead.) Baiting her into a trap isn't all that viable, but bare in mind she WILL act as a beacon to be trashed on site, so play that to your advantage if you can.

(Salsette Island era)
Mechanoise 1575
Not bad, but for one extra influence, you can get GRNDL Refinery. Not only does it give 2 more credits per click-n-trash, it can also be a mind game, since you can advance it facedown. Alix, by contrast, has to be faceup for counters to pile up. Maybe this is just me hoping for Weyland to get competitive again, but I think if you're splashing for Alix in Blue sun, you might be better off with refinery and dedication ceremony, which gets you a net 11 credits in a turn. — lightburied 13 May 2016
@lightburied. It can't be denied that the Refinery nets good money, and in trap-centric decks I would probably opt for it over Alix, but what makes Alix different is that compared to the Refinery her ability is entirely passive; you're generating potential credits from doing what you would normally be doing. The Refinery's ability requires click and credit investment, so, 'technically' you only reap 2 credits worth of net from the Refinery, but dedication ceremony blows that out of the water. By placing Alix in a tough server while you wait for agendas you feasibly can create a big credit swing, either through taking the credits from Alix or coaxing the Runner to spend their money running your horrible server to get rid of her, pulling back ICE to re-collect the rez cost afterwards. It's worth a play. — Mechanoise 16 May 2016
2

(The Valley era)
vjhorse90 17
If the runner chooses not to access the second Toshi after you return the first Toshi to your HQ, the second Toshi won't trigger. — Lttlefoot 7 Apr 2015
That is right. The timing is hard to know when use agenda. That is why I recommend Plan B but not Toshi. But it produce safe advance token bank, and toshi can be swapped with asset is better.(GRNDL refinery, Haas arcology ai, etc) — vjhorse90 7 Apr 2015
2

I really like this card though it is hard to include. It's not really obivous which kind of deck this card supports the most:
On the one hand Haas-Bioroid: Engineering the Future can be amplified to 3 for an install. That however means that you have to protect Alix for mulitple turns for maximum value.
On the other hand NEXT Design: Guarding the Net has many ice to put somewhere however the actual identity ability is triggered before Alix can be installed. Every following piece of ice is likely to cost one or more to install.

I think that she can also fit into Cerebral Imaging: Infinite Frontiers by using her and Shipment from MirrorMorph as an economy engine:

This results in the best case of e.g. 3 Adonis Campaign and 3 Eve Campaign and 6 (9 gain, 1 rezz cost, 2 play cost for shipment) in one turn. As a bonus you can also hide an agenda in those 6 cards as you will rezz the assets usually only when at the beginning of your turn and the runner cannot check all 6 cards in their turn.

All in all I think this card can be very good if you can adapt your play style to her though the trash cost of 2 makes her very fragile.

PS: Don't forget she can be sniped by Unregistered S&W '35. If anyone would run that...

(The Valley era)
Capstone 42
Do you mean "Take 12 credits from her"? — Yubinshan 5 Apr 2015
That is correct! I'm correcting it. — Capstone 5 Apr 2015
could she not also fit in the foundry? make all those ice installs act somewhat like an EtF install? — zithith 9 Apr 2015
Blue Sun seemed the most logical choice for me, and as long as she is treated as a financial reserve, (or a 'run my server if you want her gone' motif), she quickly nets 10+ credits from just sitting there. I posted a decklist explaining it a little better http://netrunnerdb.com/en/decklist/24077/holy-hand-grenade-of-t4lb07 — Mechanoise 24 Jul 2015
I have discovered a wonderful interaction with Batty and Architect in Nisei Division which I have described in my decklist here: http://netrunnerdb.com/en/decklist/26650/and-alix-talbot-is-secretary-of-the-treasury — Runaway 23 Sep 2015